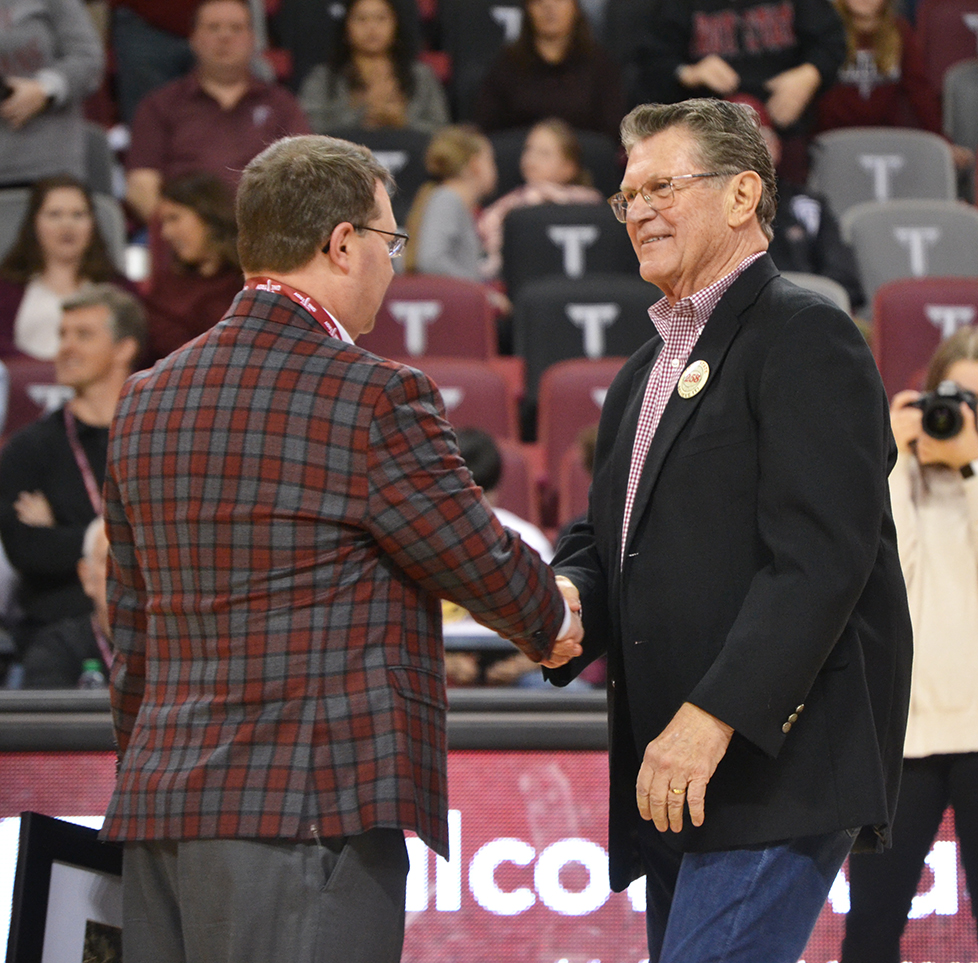 Troy Athletic Director, left, welcomes legendary Troy coach Don Maestri, right, onto the court during a celebration of the 258-point game from 1992. (Photo by Josh Boutwell)

Troy University will honor the 1993 and 2003 NCAA Tournament teams on Saturday, Feb. 11, during the Troy men’s basketball team’s game with Louisiana at Trojan Arena.

“Our men’s basketball program has a rich tradition of excellence for three quarters of a center, and we’re excited to welcome back all our letterwinners in February for a special ay in Trojan Arena,” Troy Athletic Director Brent Jones. “In addition to celebrating all our amazing letterwinners, we are privileged to recognize two teams on that day that played an elite level under legendary coach Don Maestri.”

Last February, Troy honored the legendary 1992 team that broke the single-game scoring record, ‘The Unbreakable Record.’ The 1993 team, though, was able to do what that 1992 team couldn’t and make a run in the Division II NCAA Tournament.

The 1993 team is Troy Basketball’s only team to ever make it to a National Championship game. “Trey State” as the Trojans were known at the time, won a school record 27 games as the Trojans made a bid for a national championship. Prior to that season, Troy had made it to the Elite 8 just once in school history.

The 1993 team hosted the regional round of the Division II NCAA Tournament that season and beat Florida Southern in the second round before besting Delta State in the Sweet Sixteen. In the Elite Eight, Troy ran past Washburn and then knocked off Southern New Hampshire in a shootout in the Final Four. The Trojans finally fell to Cal State-Bakersfield 85-75 in the NCAA Division II National Championship.

The 2003 Trojan squad was the first team in Troy history to make it to the NCAA Division I Tournament. That team not only won the regular season Atlantic Sun Conference Championship but also won the ASUN Tournament Championship. The Trojans won each tournament game by 10 points or more, including an 80-69 win over Central Florida in the ASUN Championship.

The 2003 Trojans won 26 games, the second most in school history in a season, and played the No. 3 seed Xavier in the opening round of the NCAA Tournament.

All returning basketball letterwinners can receive up to four complimentary tickets for the Feb. 11 game with Louisiana and are invited to a reception with their families. Letterwinners can RSVP by phone, at (317) 517-9864 or at rsbrown@troy.edu.