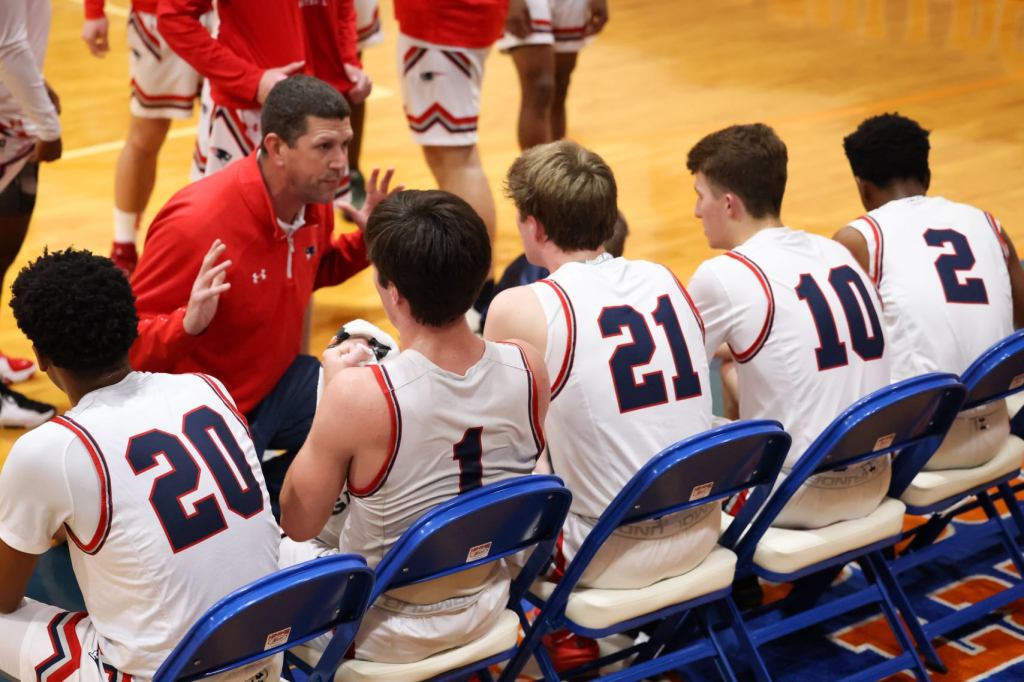 Contributed photo/Candace Nelson | The Messenger Pike coach Matt Brown talks with his team during a game earlier this season.

The Pike Liberal Arts Patriots haven’t played as many games as most in the month of January, but they are making the most out of every opportunity they get to be on the court.

The Patriots have 18 games under their belt this season, but due to their opponents having COVID-19 concerns and other issues, the Patriots have played just four games in the month of January.

The Patriots took on rival Tuscaloosa Academy on Tuesday night for their second game in as many nights. The Patriots celebrated senior night on Monday with a 67-31 win over Valiant Cross.

“Senior night is always a fun night, a special night,” head coach Matt Brown said. “You get to honor the guys who helped us get to where we are at. Everyone who started last night has been with us for at least three years. It’s been a pleasure to get to coach them as an assistant coach and now as a head coach.”

It’s a complicated time of year for the Patriots with the start of baseball on the horizon. With many days off between games as of late, Brown and the Patriot coaching staff are trying to keep the players focused on the final weeks of the basketball season.

“It’s always been a thing for most private schools,” Brown said. “We have guys who play multiple sports. Right now we are trying to keep guys engaged and in basketball mode.”

That challenge gets ratcheted up a bit more with so many days in between games. The Patriots are still practicing on a daily basis.

“We are still practicing every day,” Brown said. “We are able to get a little time off, so it’s not nearly the same wear and tear on your body.”

Brown went on to say that missing games became frustrating for the Patriot players.

“There were probably four or five games where up until lunch we were planning on going somewhere or having a home game,” Brown said. “All of a sudden we would get a call from an athletic director or headmaster saying the team had backed out due to COVID or other reasons. It got to be frustrating. When you are as talented as this team is, you want to go out and play. When you go out there and beat teams by 30 or 40 points, they seem to not want to play. That is probably the most frustrating part of it.”

The Patriots received plenty of leadership from their eight seniors during their time off.

“We have a lot of good leadership out of that group,” Brown said. “They kind of kept us together. It gave us a chance to work through and polish up on some things.”

With practices piling up for the Patriots, Brown and the coaching staff have been looking for ways to create a fun environment for the players.

“Me and the coaching staff have tried our best to find fun things to do at practice,” Brown said. “We have a half court shot to begin practice. We are playing Gotcha, and doing four-on-four drills. At the end of the day, coaches included, nobody wants to be practicing in January. We want to be preparing for the teams we are playing.”

After their game with Tuscaloosa on Tuesday night, the Patriots will play Glenwood, Valiant Cross, Autauga and Heritage Christian before they bring an end to the regular season.

“We want to stay healthy and make sure we are doing things the right way,” Brown said. “A lot of good competition coming up. We probably have four of the top six teams in the state, as far as the AISA goes, coming up in the next seven days. It’s an exciting time for us. It couldn’t come at a better time. We have to make sure we are sharp and playing our best basketball.”