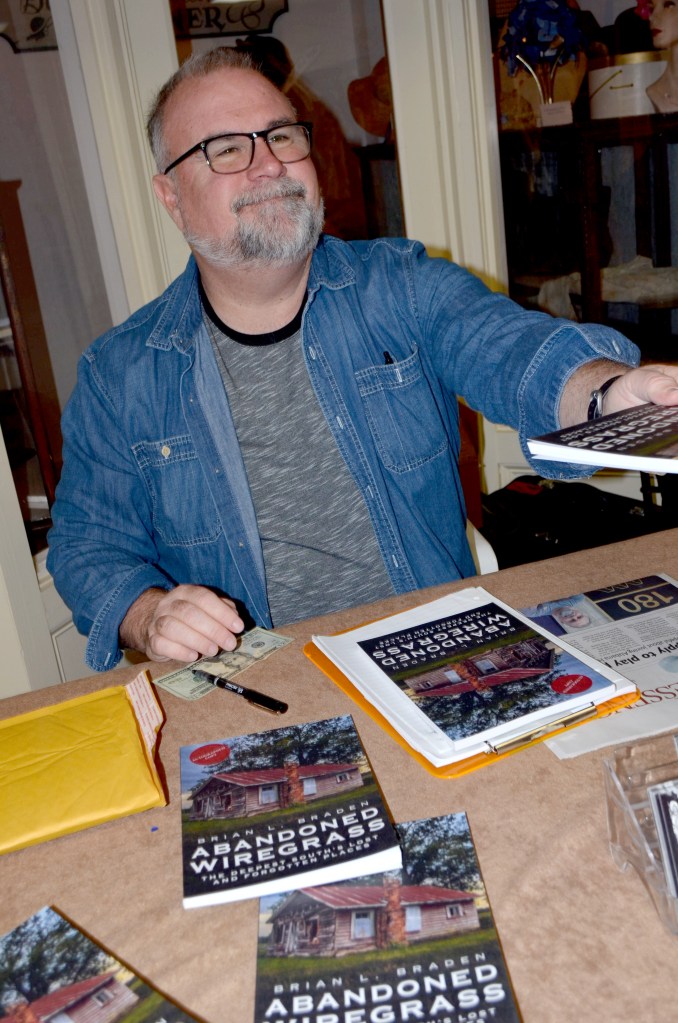 The Pioneer Museum of Alabama is a place for looking back at times, places and things too often forgotten.

At the Pike Pioneer Museum of Alabama on Sunday, the afternoon was dedicated to looking back at things forgotten.”

Braden told the gathering of local history and photography buffs that the Wiregrass, the deepest of the deep South, is teeming with “forgotten places.”

As he travels the roadways in search of places that people and time have seemingly forgotten, he looks for tell-tale signs.

“Trees are signs of forgotten places, especially old oaks,” he said. “Empty, baron fields, overgrown areas, lone chimney stacks, lingering lantana and ditch daisies, just any signs that indicate that no one has been that way in a long time.”

Braden said the lingering aftershock of the 2008 economic crisis and 2018 Hurricane Michael still reverberate in the Wiregrass.

These pressures, along with an aging and declining population, have created a region where abandoned buildings are commonplace, Braden said. These forgotten structures speak of dreams lost; from crumbling sharecropper shacks, to desolate main streets, to modern homes where the owners simply moved on.”

Braden chronicled the slow-motion apocalypse of abandoned homes and businesses of the Wiregrass and also offered hope for areas where citizens fight to revitalize their hometowns and preserve a rich cultural heritage.

Keith Roling, a local history buff and museum board member, said Braden’s presentation and then the reading of his book, “Abandoned Wiregrass: The Deepest South’s Lost and Forgotten Places” resonated with him.

“Living all my life in the center of houses and areas like the book shows, it seems that most of these have a good up story,” Roling said.  “The people who moved mostly moved on to better and more modern places. Their memories of life on the old home place were replaced, in the city with modern bricks, city water and neighbors.

Roling said WWII brought along opportunity. People could leave the farm and made a good living, including opportunities with Uncle Sam.

When family land was divided among children, the old homes were often left behind.

“Renovation and restoration were too expensive, so, it was cheaper and easier to build a new house or to buy a nice, warm trailer,” Roling said. “Now, many grandkids are finding rural properties more attractive. There is a continuing tread toward the antebellum homes and old barns that were abandoned. The federal government set photo teams to capture those images. The Siler house next to me was basically abandoned during the 1950s to early 1960 and look at it now.”

Roling said as long as people continue to prosper, the trend will continue. New will replace the old.

“Unfortunately, precious memories are all that remain and that is the reason photographs and the Pioneer museum are so valuable,” he said. “They preserve those memories.”