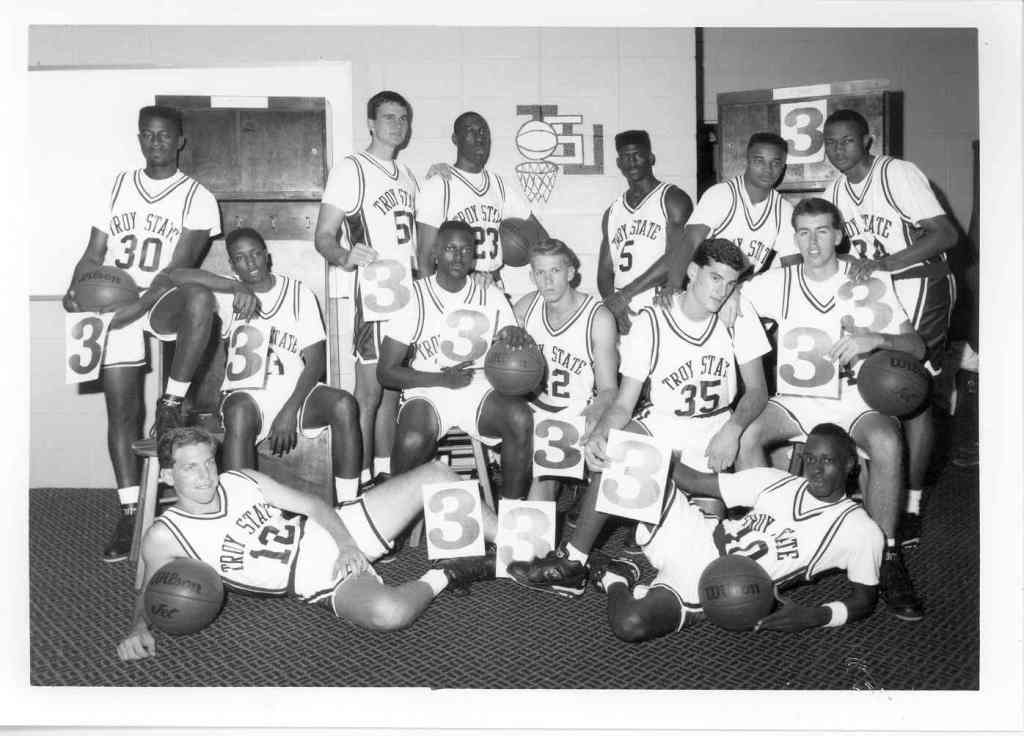 Contributed photo/Troy Athletics | The Messenger Troy University will celebrate the 30th anniversary of their record-setting performance during Saturday’s game against Georgia State.

In just three days Troy University will celebrate the 30th anniversary of a record that has yet to be broken.

On a Sunday, Jan. 12, 1992 the Trojans welcomed in DeVry Institute for a Sunday afternoon contest. By the end of the afternoon seven NCAA records were dashed, including most points in a game, 258, put up by Trojans in a blowout win against DeVry.

On Saturday afternoon there will be a celebration and a reunion for the members of the 1992 men’s basketball team.

“One thing we are really looking forward to is the opportunity to pack out Trojan Arena,” Troy Executive Associate Director of Athletics Kyle George said. “We have two really exciting basketball teams that are clicking on all cylinders…This presents an opportunity for us, being that it’s a doubleheader and that we are celebrating one of the most remarkable records in program history. It’s a perfect opportunity for us to welcome our fans back into Trojan arena full force.”

The celebration will take place during the doubleheader at Trojan Arena featuring the Troy Trojan women taking on Louisiana Monroe and the men taking on Georgia State.

All 11 Troy players scored, 10 of whom finished in double figures. Troy went on to average 121 points per game that season, setting a new NCAA record.

“It goes back to that slogan ‘Believe it’,” George said. “We are excited to honor this team. They are a great basketball team first and foremost. They have a record that is so exciting to be a part of.”

George expects many of the members of the 1992 team to be in attendance on Saturday including former head coach Don Maestri.

There will be plenty of promotions surrounding the event. Fans in attendance will have a chance to receive one of 2,000 retro Troy State T-shirts. The first 2,000 fans in attendance, beginning with the women’s game at 2, will have the opportunity to take home a free shirt. 1,000 rally towels will also be given out. The towels will feature the phrase Believe It along with the commemorative 258 point logo. The towel will be given out to Troy University students in attendance.

There will be a fan zone outside of Trojan Arena prior to tip-off and the Trojan Tailgaters will also be on hand grilling hamburgers and hot dogs.

“It will be a great atmosphere,” George said. “When you’re coming up to Trojan Arena on Saturday, we want this to look like a big-time atmosphere. Make sure you have a great time at the game as soon as you walk through the door for the women’s game and continue it all the way through the men’s game that afternoon as well.”

Head men’s basketball coach Scott Cross believes Saturday’s celebration is a great way to welcome alumni back to Trojan Arena and the university.

Fans will have the opportunity to watch two teams that are currently playing their best basketball of the season.  The Troy women entered the week on an eight game winning streak and are 12-5 on the season. The men also entered the week 12-5 and have won their last two games.

“Coach Rigby has done a phenomenal job with her team and her program,” Cross said. “They have built a winner and they have won every year. Now that we are starting to win, I think there is a little bit of a buzz and obviously having a doubleheader is exciting. It’s an opportunity for the fans to come watch two teams that both have 12 wins and hopefully 13 by the time we play on Saturday.”