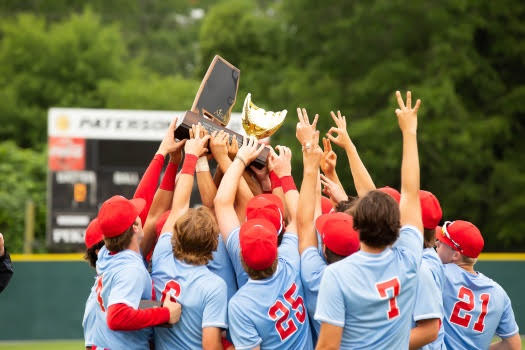 The 2021 baseball season was highlighted by another state championship by a local team.

The Pike Liberal Arts Patriots finished off their third-straight state championship when they knocked off Tuscaloosa Academy at Paterson Field in Montgomery.

The Patriots, winner’s of the state championship in 2018 and 2019, won their third-straight title with a two-game sweep over the Knights.

“Excitement is a good word and there was a little relief,” Hixon said shortly after the championship. “I think everybody that was on the outside looking in saw the finished product, but very few people saw what goes into making these championships happen. I got to see all the work these kids put in and I got to see the people who had a helping hand with it. For me to reflect on everything it took to see that dog pile, it’s an awesome feeling.”

“It wasn’t as easy at it looked Hixon said. “We had a tough schedule, and every team we played wanted to beat us. We started the year as the number one team and we never lost that spot. We lost to Bessemer in the second week of the season and these guys had to hear that we were probably overrated. Things weren’t always easy for them. There was a Sunday practice where we didn’t pick up a baseball. We did nothing but conditioning to get out effort and our mindset right. When people see championships, they see the talent, they see the kids committed, but nobody sees the kids showing up six days a week putting in the work.”

Chase Smartt began his coaching career with the Trojans in 2021. The 2015 graduate of Charles Henderson High School was part of two championship teams as a Trojan player. In his first season Smartt led the Trojans to a second place finish in Class 5A Area 4 and advanced to the opening round of the state playoffs where they took on UMS Wright. They fell to the Bulldogs to finish up the season.

“It’s awesome and it’s a great honor,” Avant said. “I’m excited to get to work with everyone on the staff. I’m excited to win some ball games with some veteran players in the classroom and on the field.”

After graduating from Pike Liberal Arts, Avant attended and played baseball at the University of Alabama. After being drafted by the New York Mets, Avant eventually returned to Alabama as a volunteer assistant coach. After year back with the Tide, Avant decided he wanted to return to the high school game.

“I was looking to see if I wanted to get into high school or stay in college coaching,” Avant said. “The more I thought about it, I was leaning more towards high school. I started looking around and I saw this job was open and I decided to apply for it and here we are now.”

Pike County Bulldogs also made coaching changes after the 2021 season. John Watkins comes in to lead the Bulldogs for coach Josh Ritter, who leaves after one season.

“Very happy to be the head coach,” Watkins said after being hired. “I’m ready to get started. I came down earlier this week and was looking for a place and I met some of the kids. They seemed like great kids and I can’t wait to get started.”

Watkins comes to Pike County after being the head coach at Chilton County.