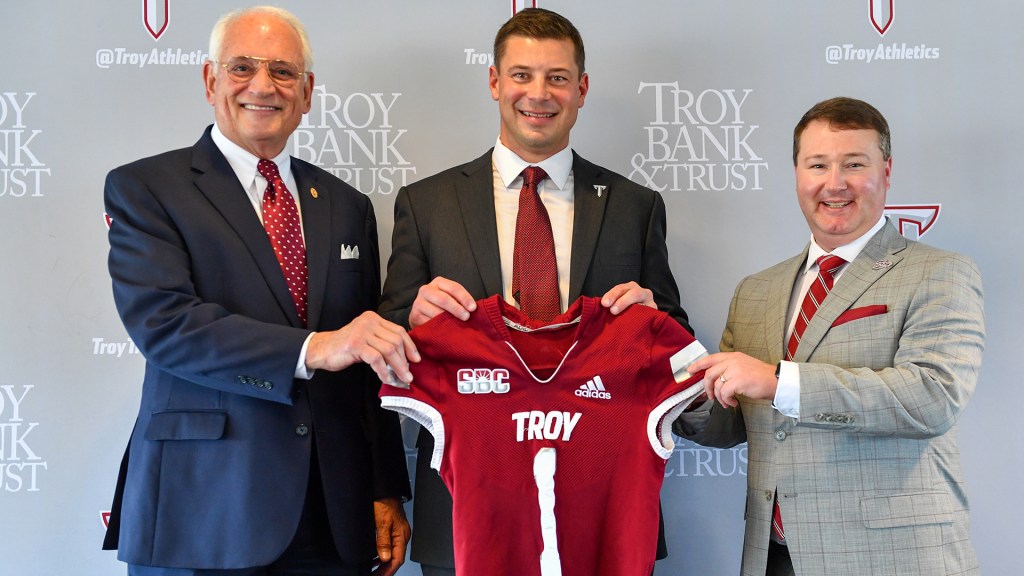 The fight song has been played and the applauses are now silent. It’s now time for Troy head coach Jon Sumrall to get to work.

Sumrall was introduced as Troy’s 23rd head coach on Monday in front of an excited crowd of coaches, alumni and fans at Veterans Memorial Stadium.

After a full time of seeing old acquaintances and meeting new friends, it’s time for Sumrall to get to work building his staff and his team as early signing day looms.

While most people are eager for Sumrall to fill his staff, the new head coach is going to take things slow, at least at the start.

“I think some people want to do it fast. I’m probably going to be a little bit more methodical,” Sumrall said. “I think it’s something you want to measure twice and cut once. You want to get it right. I have really learned a lot through mentors of mine who have been in the seat that I have been in. I think one of the greatest pieces of advice is put the staff together that is the right staff for the place you are at. Don’t worry about how fast it is and make sure it’s right.

Sumrall will take time to talk with the current staff before ultimately deciding on coaches he believes will be best for Troy.

“We will address, we will talk through the guys  who are currently here and have conversations with those guys,” Sumrall said. “Obviously I’m grateful for what the previous staff has done here and want to build on what has been done. We will put together the staff that is best for Troy. We are going to do what is best for Troy.”

Director of Athletics Brent Jones will help Sumrall with the process of filling out his staff, but he has confidence in Sumrall in finding the best assistances for the program.

“Now comes the really tough part of putting together a great staff,” Jones said. “Coach Sumrall is going to work diligently with that. I’m going to help him each and every way that I can. He is the leader, he is the head of the program, but it’s going to be just as important to make sure we get the right people at the right time, going the right way with our assistant coaches. I have every bit of confidence that he can do so.”

There is one week before Early Signing Day, leaving Sumrall just days to look at his current roster and the players who are expected to be joining the team.

“I have looked through the scholarship numbers and have evaluated sort of what are needs are.” Sumrall said. “The most important part of the roster, to me, are the guys who are already here. The majority of our 2022 team are in our building. We have to add some pieces, we have five commitments that are staying on. We have to add some pieces to supplement what is here, to give us a chance to be competitive and to win games.”

Sumrall is no stranger when it comes to Troy’s roster having recruited many of them during his first stint with the Trojans.

“He has recruited half our roster,” Jones said. “You want to talk about a person that can walk in and instantly have that connection. He has a blue print.”

Sumrall has reached out to the student athletes who have previously committed and he intends to honor each and every commitment.

“I’m not going to walk in and start making significant changes on guys,” Sumrall said. “We’ll at least work through that and make sure they are in the right spot.”

Sumrall is known around the country as a strong recruiter.

“He is considered to be one of the more dynamic recruiters in the south,” Jones said. “He knows the state of Alabama extremely well. He recruited there when he was at Ole Miss as well as the last three years at Kentucky.”