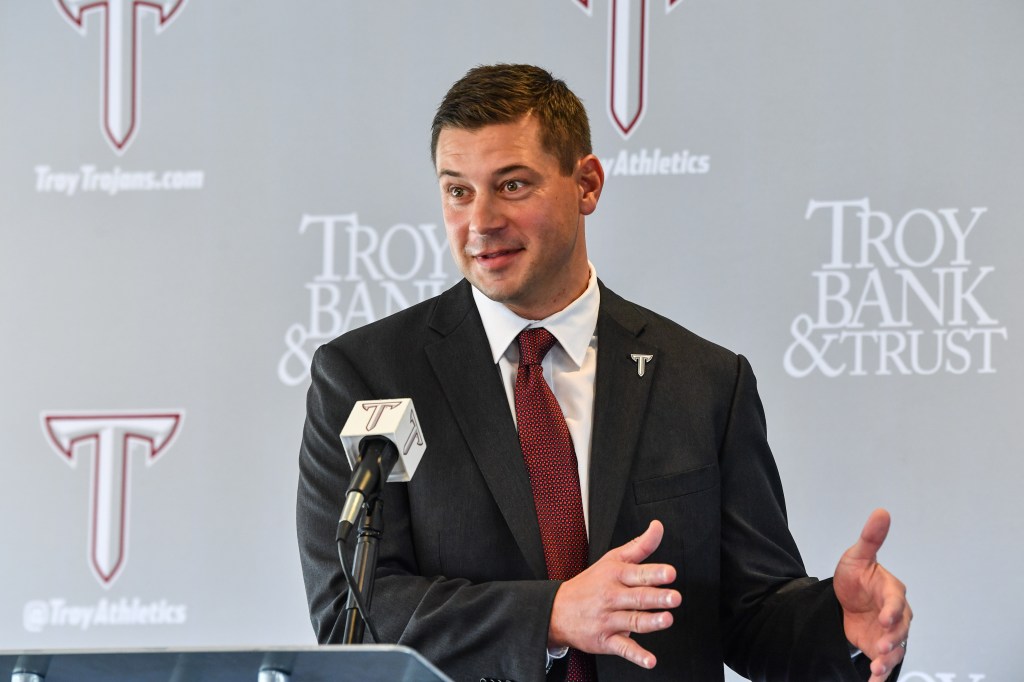 There was plenty of fanfare inside Veterans Memorial Stadium’s Stadium Club on Monday morning when Jon Sumrall was introduced as Troy’s next head coach.

Chancellor Jack Hawkins, Jr, Director of Athletics Brent Jones, board members, fellow coaches and fans were all in attendance to watch the new head coach at the podium for the first time.

“This place is special for me and my family. That’s why we are here,” Sumrall said. “The people here made it special to us the last time we were here and I firmly believe the people are going to make it special again for our family, our football team and everything we are doing.”

Sumrall became Troy’s 23rd coach last week and on Monday, fans of Trojan football got a glimpse of their new head coach.

“Today is a great day for Trojan football in naming Jon Sumrall as our 23rd head football coach,” Jones said. “Coach Sumrall brings a lot of intangibles, energy, enthusiasm connectivity, not only with our players, but with our fans as well.

Sumrall was one of approximately 50 coaches who were considered for the position, according to Jones. As the number of candidates dwindled down to 25, 10 and so on, Sumrall remained at the top of the list.

“This was a highly coveted job,” Jones said. “We started with 50 targets (narrowed) it down to 25 and then I had 15 interviews. We did not make it easy on Jon whatsoever. You want to talk about countless, countless hours of being able to rise to the top. This was the most deliberate, thorough, as well as diverse candidate pool we have ever had.

Sumrall was coaching at Kentucky under head coach Mark Stoops when the news broke about the firing of former Troy coach Chip Lindsey. Sumrall wasted little to time in getting his name in the race for Lindsey’s replacement.

“I am so grateful for the last three years watching Mark Stoops do it at the highest level of college football and do it in a way that has never been done at a place that is not used to doing it that way,” Sumrall said. “His example is so special in my life.

“I’ll never forget hugging him on the sideline as time ran out after kicking Louisville’s butt. He came over and told me I love you, I don’t want you to go, but you have to go get this job.”

Sumrall was part of plenty of success with the Trojans in his first stint. Since the departure of Neal Brown to West Virginia, Troy has seen their win totals drop. Like Brown did from 2015-2018, Sumrall is expected to rebuild Troy into a team that will once again compete for conference titles.

“Our vision for Troy University football has not changed,” Jones said. “We want to compete for conference championships, be bowl eligible, win bowl games and compete for the College Football Playoff. We want to be the in the top five of the Group of Five. Those expectations have not changed. That’s what I let all the candidates know. There was one person I felt could match the energy, the enthusiasm and the passion that we all have for Troy football and that is Jon Sumrall.”

The process of rebuilding for Sumrall and the Trojans will begin in the spring and then carry over into the summer and then fall.

“Troy football is a winning culture,” Sumrall said. “The expectations are real and I want to embrace that. I didn’t want to go to a program that wanted to be average or mediocre. I wanted to go some where, if I was ever going to be a head coach, and be expected to win.

“Success is expected and that is what excites me.”

On Monday, Sumrall detailed what his program is going to be about.

Chancellor Hawkins described Sumrall as being a player’s coach.

“I can’t think of a more meaningful tribute than for a coach to be known as a player’s coach,” Hawkins said. “That was coach Larry Blakeney, that was coach Neal Brown and that is what I have already heard from the players that played for Jon Sumrall.”

Sumrall appreciated the comment by Hawkins, but admits that could mean different things.

Sumrall, being a defensive-minded coach, laid out his philosophies for both offense and defense.

“On defense, which is obviously my expertise, we are going to be sound schematically and we are going to play fast,” Sumrall said. “We are going to play with effort and energy. After we play our opponents I want them to feel like ‘Man what did we just go through? That was a buzz saw.’ Offensively I want to be physical and run the football. Create explosive plays by taking shots down the field. Play with tempo, utilize shifts, formations and unbalanced shifts that make people have to adjust to us.”

Sumrall wants and expects the team to be tough and to be disciplined.

Sumrall closed out the ceremony with his goals for the upcoming season and beyond, none bigger than winning and bringing an exciting atmosphere to Veterans Memorial Stadium.

“That’s our standard,” Sumrall said. “We want to be in the conference championship game. We want to play in and win bowl games. We want to be ranked in the top 25. I want to sell out Veterans Memorial Stadium every time we play here.”