Sumrall returns to Troy as next Trojan head coach 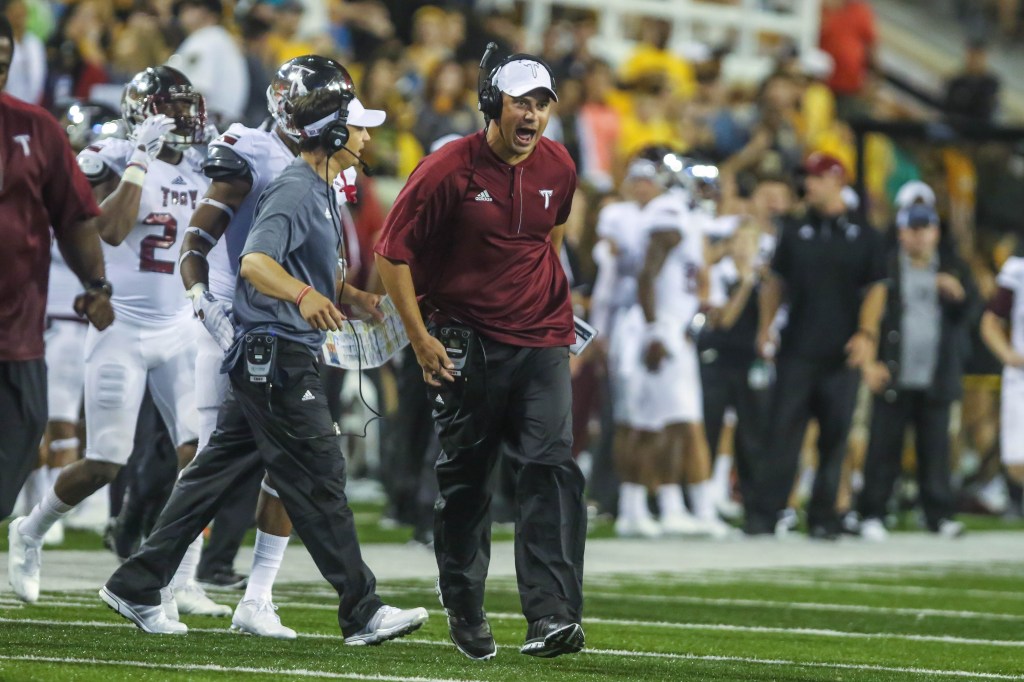 “We got our man!” that was the message Troy Director of Athletics Brent Jones sent out on social media late Thursday night after the Trojans announced the hire of their new head football coach.

“We are excited to appoint Jon Sumrall to lead our Trojan football program,” Dr. Hawkins said. “Jon is a proven winner. He possesses the values, love of Troy and experience to lead our university to championship status.”

Sumrall takes over for former head coach Chip Lindsey who was fired in November. After a quick, but thorough search, Sumrall was chosen to be the team’s next head coach.

“Jon Sumrall exceeded all the criteria we had when searching for a new leader for our football program,” Jones said. “He is a proven winner and a dynamic recruiter that will continue to build upon our championship legacy. In Jon, we have a leader who is energetic, intense and brings a level of passion that is unmatched. He fully understands our championship expectations and has a comprehensive plan to take Troy Football to the top of the Sun Belt Conference and the Group of Five. We are thrilled to welcome Jon, Ginny, Sam, Sadie, Stella and Selah back to Troy, and I know our community is excited to welcome them with open arms. I have no doubt Jon Sumrall is the right man to lead us into a new era of Troy Football.”

“Troy University and the Troy community left an indelible mark on our family,” Sumrall said. “I am humbled and extremely grateful to Dr. Hawkins, Brent Jones and the entire selection committee for their trust in me to lead this storied football program. Ginny and I fell in love with Troy and can’t wait to return home and reconnect with the tremendous fan base. Troy Football has a proud tradition of success, and I look forward to leading this program back to a championship level.”

During his first tenure at Troy, Sumrall helped lead the Trojans to a pair of bowl victories, a Sun Belt championship and a stunning victory over nationally ranked LSU.

In Sumrall’s first season at Troy, the Trojan defense finished with the second best turnaround nationally in opponent third down percentage, holding opponents to 14.62 percent. The Trojans also had the fourth-best turnaround in yards per play allowed (-1.13), the fifth-best improvement in tackles for loss per game (2.59) and 16th-best improvement in total defense (-62.7).

During the 2016 season, Sumrall and the Trojans finished with a 10-3 record, a victory in the Dollar General Bowl, the first top-25 ranking in both school and Sun Belt Conference history and had the best win-improvement in the country.

Sumrall left Troy and headed to Ole Miss before the start of the 2018 season. After spending one season with the Rebels, Sumrall left for Kentucky the following season.

Sumrall led the middle and weakside linebackers in his first season in Lexington. UK’s defense helped limit opponents to under 30 points in every game that season for the first time since 1979.

This season, Sumrall and the Wildcats have the 25th ranked defense in the nation, fourth in fourth down defense, 16th in rushing defense and 11th in defensive touchdowns.

In addition to his stops at Troy, Ole Miss and Kentucky, Sumrall spent time at San Diego and Tulane.

There will be a press conference to introduce Sumrall to Trojan Nation on Monday morning beginning at 11 a.m. in the Stadium Club at Veterans Memorial Stadium.