Troy looks to clamp down on bowl eligibility 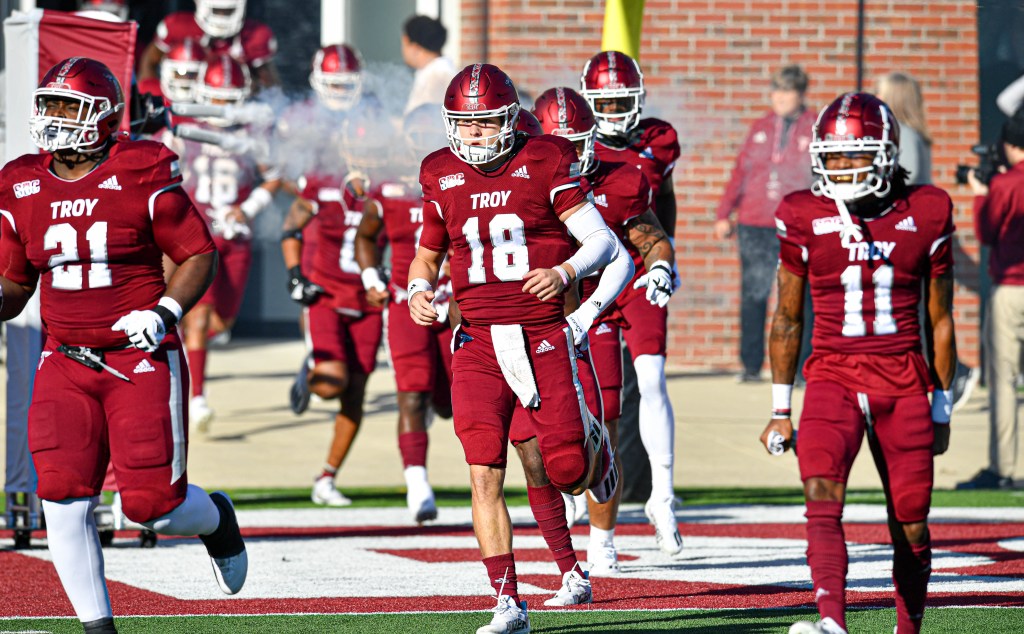 Contributed photo/Troy Athletics | The Messenger Gunnar Watson (18) and the Trojans run on to the field prior to their game against Louisiana last Saturday.

The Troy Trojans get another crack at bowl eligibility on Saturday when they take on the Appalachian State Mountaineers at Veterans Memorial Stadium.

The Trojans enter the contest one win away from their all-important sixth win that would give them bowl eligibility for the first time since 2018.

“We have two games left that we are guaranteed (to play) with bowl eligibility out there,” head coach Chip Lindsey said. “It gets no easier, that’s for sure. This is a grown man’s league, so you have to be ready to go each and every week.

The Trojans will try to earn a bowl spot this week when they take on the East Division leading Mountaineers, who are enjoying a four-game winning streak.

The Trojans fell to Louisiana last week to fall to 5-5 overall and 3-3 in conference play.

“You don’t have time to feel sorry for yourself. We had to flip the switch and turn our attention to Appalachian State,” Lindsey said. “Really good football team. Another veteran team we are going to play, when you look at their roster. Their head coach does a great job. He’s an offensive line coach by trade; they’re going to attempt to run the football. That’s what they’re going to hang their hats on.”

“I think Camerun Peoples is the guy that makes them go,” Lindsey said. “Very talented guy. We have to make sure we get to him before he starts going down hill on us. Something we didn’t do a great job at a few times last week.”

The Trojan defense continues to harass opposing quarterbacks. Led by Javon Solomon and Richard Jibunor, the Trojans are averaging 3.6 sacks per game, tied for third most in the country behind only Marshall and Oklahoma State.

Solomon, Jibunor and the rest of the Trojan defense will attempt to slow down Mountaineer quarterback Chase Brise is averaging 245 passing yards per game, second to only Costal Carolina’s Grayson McCall. He has a league leading 17 touchdowns and eight interceptions.

The Troy offense, led by quarterback Gunnar Watson and running back Kimani Vidal, is averaging 25 points per game this season and 357 yards of total offense. The Mountaineers are averaging 21 points per game and has kept opposing run games to just 121 yards on the ground.

“Linebacker D’Marco Jackson is one of the most talented guy in our league,” Lindsey said.

“Big, physical guy who plays down hill. Their defense has three or four really good players. Really solid defense I think  you see another group of veterans who play well together.”

This will be the 22nd meeting between the two schools. The Mountaineers lead the series 12-9. Troy has lost the last three games against the Mountaineers by an average margin of 27 points. They lost by 37 and 35 points in the last two seasons.

“What an opportunity we have in front of us,” senior offensive lineman Dylan Bradshaw said. “App. State, they have a good football team. You can make the argument that since I have been here, they have been in the running every single year. They are the team you have to beat if you want to get into the championship game. We know what we have in front of us. We have to find ways to finish games better. We have ben right there in a couple and haven’t been able to get the job done. This week is a great opportunity. If we can play our brand of football and take care of the football, everybody does their job then we will look at the scoreboard to see where we are at when it’s all said and done”

Kickoff is scheduled for 2:30 p.m. The game can be seen on ESPN+