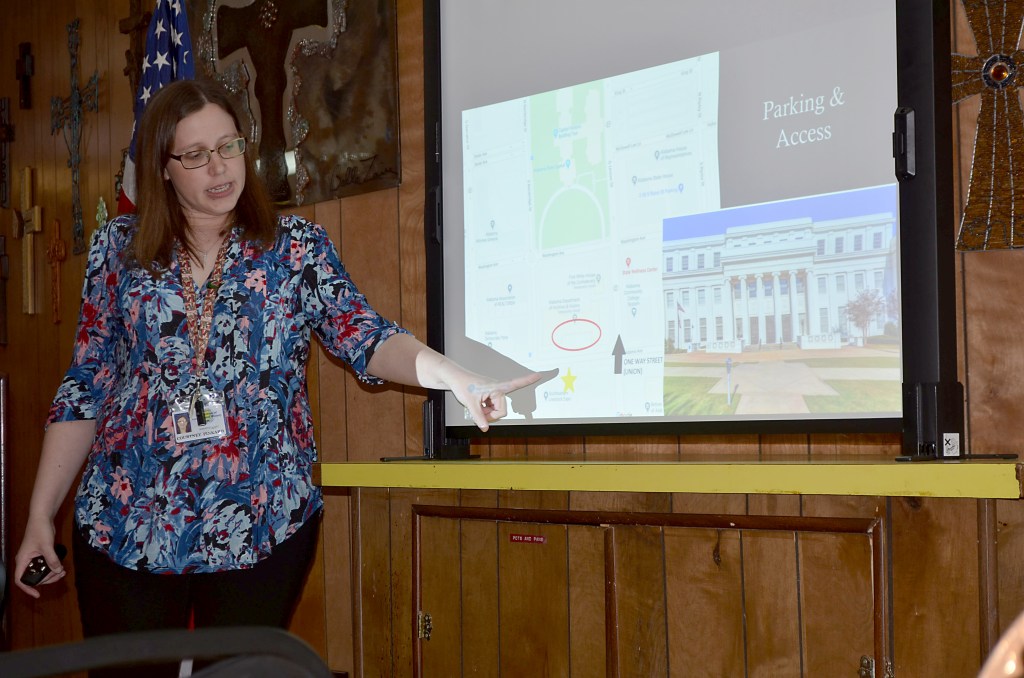 Jaine Treadwell The Messenger Courtney Pinkard, program guest of Rotarian Marvin Jackson, took members of the Brundidge Rotary Club on a “tour” of the Alabama Department of Archives and History in Montgomery. Pinkard is the reference coordinator at the ADAH.

Members of the Brundidge Rotary Club had the opportunity Wednesday to step back in time on a guided tour led by Courtney Pinkard, program guest of Rotarian Marvin Jackson.

Pinkard is the reference coordinator at the Alabama Department of Archives and History in Montgomery.

“In addition to helping patrons conduct research in the EBSCO Research Room, Courtney also conducts genealogical workshops, both virtually and at libraries around the state,” Jackson said.

Pinkard said the Alabama Department of Archives & History tells the story of the people of Alabama by preserving records and artifacts of historical value and promoting a better understanding of Alabama.

“The reference team is available to assist researchers in a variety of ways,” Pinkard said, and used a Sanborn Fire Insurance Maps of Brundidge as an illustration of a way to learn more about the history of one’s town.

The Sanborn Fire Insurance Map for Brundidge was dated 1916 through 1923 and included locations for auto repair, furniture, pressing, cotton seed businesses and the fire department.

The map showed the location of these businesses with map abbreviations that included w.c. for water closet; B.& S. boots and shoes; Ho, house, not hotel; Out Ho., outer bldg, not a privy and W.Ho. warehouse.

Pinkard said the fire insurance maps are a one-shop-stop. They show the location of the businesses as they related to the town.

Rotarian Jimmy Ramage said the “drugs” designation on the Brundidge map indicated that the drug store has been in the same location since the time map was made and, possibly, continues in the same family ownership.

The EBSCO Research Room has the largest historical collection in the state. The research room is open from 8:30 a.m. until 4:30 p.m. Tuesday through Saturday. Pinkard said use of the room is limited to a pencil, loose sheets of paper and electronic devices during the appointment. Lockers are available to store bags, purses, laptops cases and any other personal items.

Pinkard said the Alabama Department of Archives and History is open to the public and provides keys to those doing family research. However, she suggested that family history researchers first do their homework, working from the known to the unknown.

And, develop a research plan before going to a research center, Pinkard said, adding that historical research opens the doors to the past and windows into the future. It is well worth the doing, she said.