Trojans moving on after loss to Louisiana 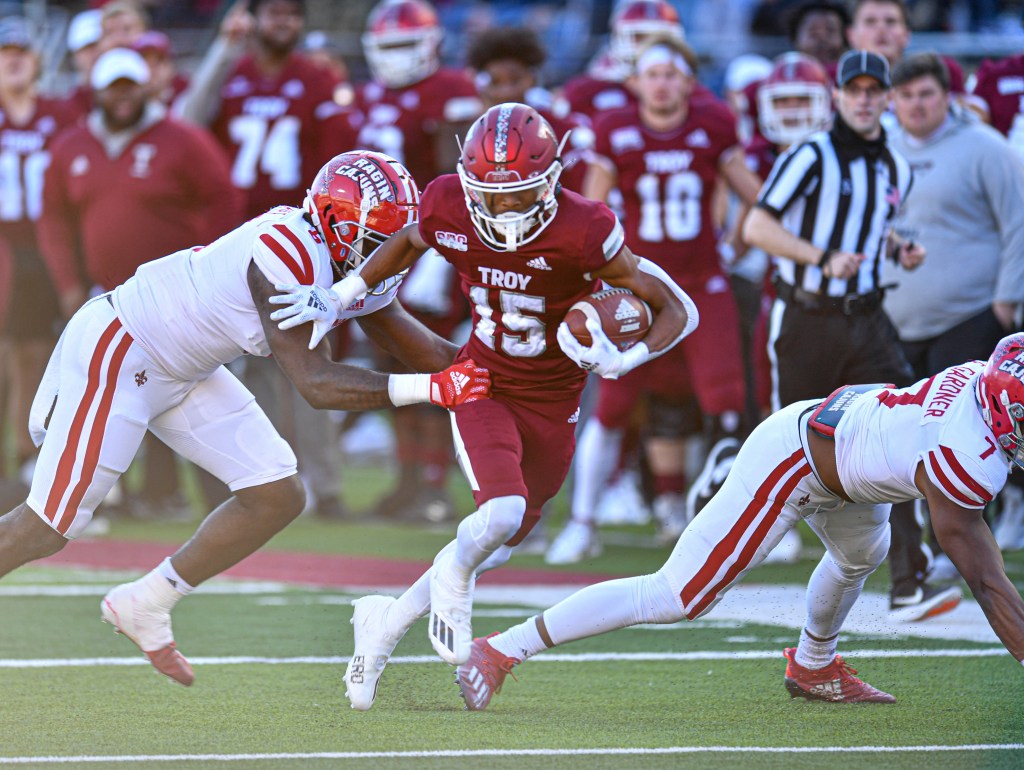 Contributed photo/Troy Athletics Tez Johnson runs after a catch for the Trojans.

Troy head coach Chip Lindsey and three Trojan players entered Saturday’s postgame press conference obviously upset about the outcome of the game, but each one had the same message, it’s time to move on.

The Trojans fell to No. 24 Louisiana 35-21 on Saturday afternoon at Veterans Memorial Stadium.

“Tough loss for us,” Lindsey said. “We felt like we were in a good spot there. Didn’t make enough plays to get it done. Hats off to Louisiana. They have a good football team. They did a good job of taking control of the game in the third quarter.

“Overall, we didn’t play well enough to win. When you don’t play good enough to beat a top 25 team, you’re not going to do it. It was there for the taking. We just didn’t play clean enough.”

The Trojans dropped to 5-5 on the season and missed out on an opportunity to clinch bowl eligibility for the first time since 2018.  The Trojans now set their sites on their final two games against Appalachian State and Georgia State.

“We have two games left that we are guaranteed (to play) with bowl eligibility out there,” Lindsey said. “It gets no easier, that’s for sure. This is a grown man’s league, so you have to be ready to go each and every week. Our guys will rebound tomorrow (Sunday). We’ll keep battling.”

The Trojans close out the season against 8-2 Appalachian State and 5-5 Georgia State.

“We have every opportunity in front of us to end this thing the right way,” Lindsey said. “We are going to play two really good teams, but I think we are very close.”

The Trojans led in the opening half on Saturday before eventually going into halftime trailing by one at 14-13. The Trojan defense allowed Louisiana to score on each of their two first second half possessions, while their offense had two quick three and outs while racking up negative nine yards. All together the Trojans were outscored in the second half 21-8.

“Disappointing the way we came out in the third quarter,” Lindsey said. “We have to get our players to play better coming out of the half. It’s not really about the x’s and the o’s. I don’t know I can’t describe it. I thought offensively and defensively we didn’t attack the third quarter.  We have to fix that. I was disappointed because when I was in the locker room at halftime our guys were dialed in.

“I have to do a better job of finding out how to get them ready heading out for the third quarter. These are 18 to 22-year-old guys who are somewhat emotional at times and can’t see the big picture. That’s my job to make sure they do.”

Quarterback Gunnar Watson finished his afternoon completing 29 of his 50 passes for 350 yards and he had one rushing touchdown. He had an interception after his pass was thrown behind Jamontez Woods and the ball was deflected into the arms of a Louisiana defender.

Wide receiver Tez Johnson caught six of Watson’s 29 passes for 83 yards and he had a touchdown that brought the Trojans to within seven early in the fourth quarter.

Both players acknowledged Saturday’s loss hurt, but it was time to move on to Appalachian State.

“Tomorrow (Sunday) we are going to go back to work,” Johnson said. “We are going to watch film on Appalachian State and put this game behind us. We have to go into this game and really play.”

“It’s on to the next one,” Watson said. “It’s over now. You can’t reflect on the past. I think we’ll come back tomorrow and be ready to get back to work. Hopefully we’ll win these next two.”

Second half woes hurt Trojans in loss to Louisiana