Notebook: Trojans knock off the Jags 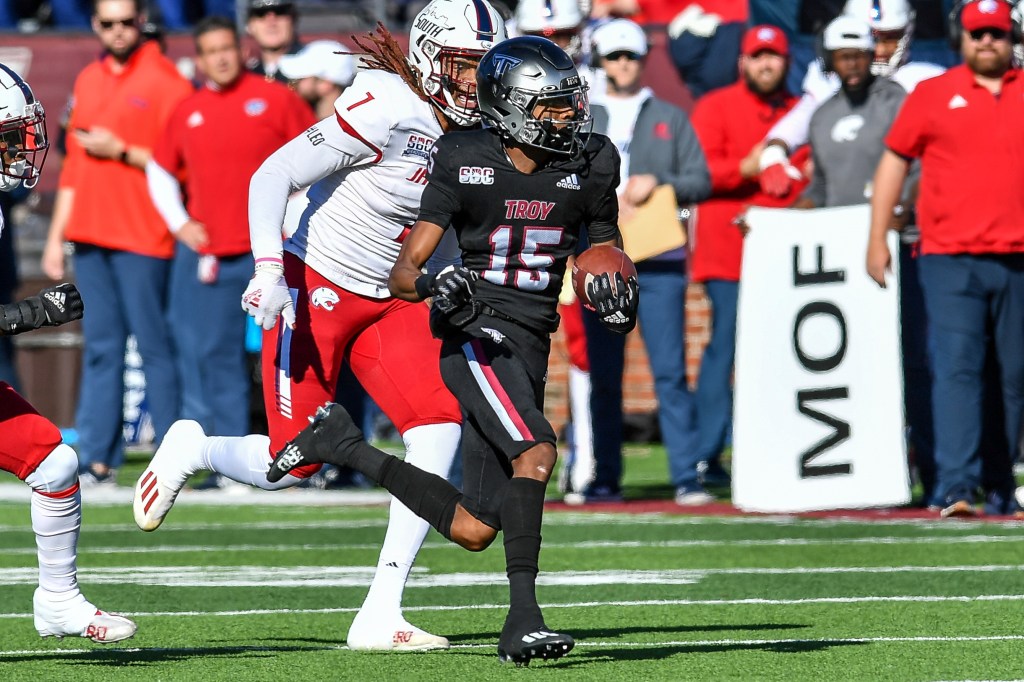 Contributed photo/Troy Athletics | The Messenger Tez Johnson runs with the football against South Alabama on Saturday.

The Troy Trojans enter week 11 of the college football season one win shy of bowl eligibility.

The Trojans knocked off in-state rival South Alabama on Saturday afternoon, improving their overall record on the season to 5-4. The Trojans are 3-2 in conference play.

The Trojans remain at home for game two of a three-game home stand to take on No. 24 Louisiana beginning at 2:30 p.m.

On Tuesday, head coach Chip Lindsey reviewed Saturday’s win over USA and looked ahead to Troy’s matchup against the Ragin’ Cajuns.

Trojans hoping to get healthy: Troy’s win on Saturday came at a price as they had a handful of impactful players on both sides of the ball due to injury.  On offense, the Trojans lost quarterback Gunnar Watson (head injury), running back Kimani Vidal (head injury) and receiver Luke Whittemore injured his knee when he made a big catch along the sideline in the fourth quarter.

Lindsey is hoping to have Vidal and Watson back this Saturday, but will take things slow this week.

“Up in the air a little bit right now,” head coach Chip Lindsey said. “Very hopeful. Our medical staff is doing a great job trying to get these guys through protocols. Once they’re out with any type of head injury there are protocols in place. We don’t know yet, probably won’t know until the end of the week. We will wait and see, but we are hopeful.”

Johnson shows his versatility with touchdown run: With the Trojans already leading 10-7 over the Jaguars, Tez Johnson gave his team some breathing room with a 31-yard touchdown. Gunnar Watson received the snap and placed it in the waiting arms of Johnson who sprinted for a 32-yard touchdown.

“When we lost some guys, who either left us or who are out right now, he has become the guy who makes us go,” Lindsey said. “Luke had several big catches and Deshon Stoudemire has come along nicely, but Tez, being a sophomore has played a ton. He is a very competitive guy who plays the game fast. He is an energy guy for us.”

Trojan defense racks up the tackles: The Trojan defense showed its depth in the win on Saturday afternoon. Three Trojans finished in double figures: Martial led the way with 14 and TJ Harris and Jordan Anthony had 10.

“If you look at the positions that racked up the tackles, these are guys who are running to the football,” Lindsey said. “I think one of the improvements we have made the last two years, we just have guys who love to play football. They compete and run to the ball and they are competitive. They just play good team defense.”

“I feel like we are playing our best football now,” Lindsey said. “Not saying we are perfect, far from it. We are an improving team that I have seen mature and grow as the season has gone.

“This opportunity we have this weekend, I feel like we are improving each and every week and playing our best team football that we have played. We have found ways to win as a football team in the last month or so and that is exciting. November is stretch time every year. We need to finish this thing the right way.”

Looking ahead: The Trojans take on a Louisiana team that is 8-1 on the season with their only loss coming against Texas.

The Ragin’ Cajuns have won the West Division four consecutive seasons under head Billy Napier including this year. They enter the week ranked 24th in the AP Poll.

“They are 8-1 for a reason,” Lindsey said. “They have a good football team, as we do as well. It’s going to be a dog fight for four quarters. I think the team that makes the least amount of mistakes will have a great opportunity to win the game.”

“The crowd we had Saturday was really good. Our student section was phenomenal,” Lindsey said. “They had a good time and stayed the whole game. I think anytime you have the chance to play a ranked opponent, especially at home, it presents a great opportunity. We have had that opportunity, since I have been here, three times. I think it’s a big deal. It brings more to the game. From our perspective, we are fighting for the postseason. Just a little more added fuel to the fire. Hopefully we will have another big crowd that will be loud and help us.”