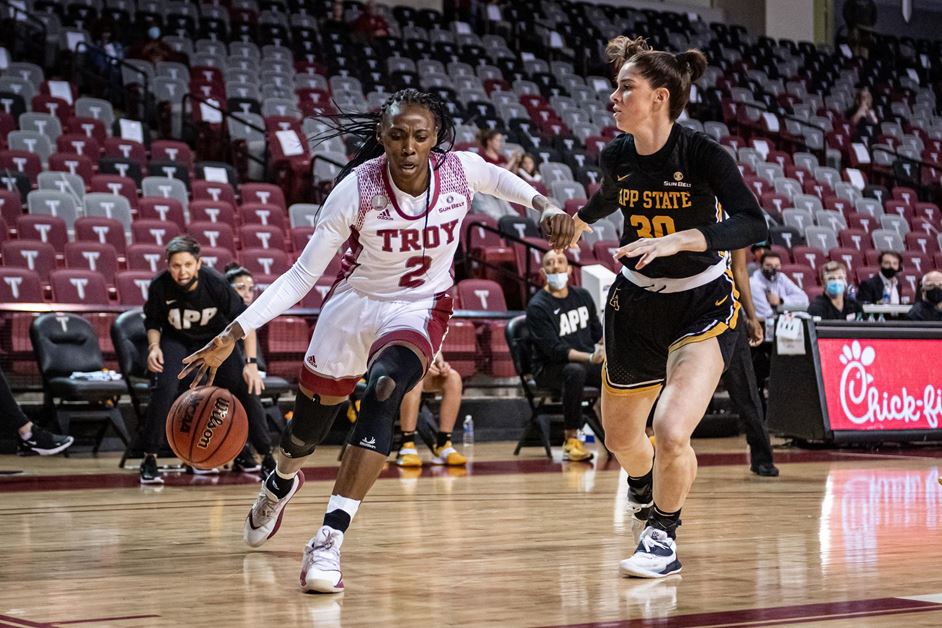 Contributed photo/Troy Athletics | The Messenger Felmas Koranga drives the lane for the Trojans against Appalachian State.

The Troy Trojans open the 2021-2022 season on Tuesday night with an exhibition against Talladega College inside Trojan Arena.

Chanda Rigby enters her 10th season as head coach of the Trojans. Rigby and the Trojans are geared up and ready to make a return trip to the NCAA Tournament next spring.

“We have set and accomplished some really big goals, but we have new ones this year,” Rigby said. “Never has anyone in the Sun Belt Conference three-peated before. That’s what we are going for. We are very far from that right now. We have a lot to work on, we have some weaknesses we are trying to overcome, but the goal doesn’t change. We are trying to win another Sun Belt championship.”

The Trojans’ game against the Tornadoes will be the first of 14 non-conference games this season, six of which will be at home. The non-conference schedule will feature four games against Power 5 opponents.

“We are trying to get more visibility on how good the Sun Belt Conference is,” Rigby said. “Part of our strategy going forward from the NCAA Tournament when we got so much visibility, number three tweeted word was Troy women’s basketball the night we played Texas A&M, was having a much tougher schedule this year. We usually schedule one or two Power 5 schools, we scheduled four. We usually schedule one tournament team outside the Power 5, we scheduled four more with Mercer, Middle Tennessee, Tulane and those type of teams. We have upped our schedule because we are trying to get more visibility to the Sun Belt.”

When the Trojans play inside Trojan arena, Rigby believes the Trojans will bring a mature team onto the floor.

“We have seven women on our team who have a college degree, because of the extra year given to them and because of the Transfer Portal,” Rigby said. “That has never occurred in the NCAA that I know of. They are very mature, so in a way we have bonded. No problems on the team, but that deep bonding you have when you go through the fire together, we haven’t been through that fire yet.”

One player not returning this year will be Alexus Dye. The Former Trojan transferred to Tennessee in the offseason. Dye was named the Sun Belt Conference Player of the Year last season after she averaged 16.6 points per game to go along with 12.6 rebounds. She led the nation with 23 double-doubles and finished second with 352 total rebounds.

“I don’t think you replace Alexus Dye with a single player, it’s by committee,” Rigby said. “We brought some very good post players in this year. Alexus was a special player for sure. That’s why she led the nation in double-doubles. I’m excited to see the fans come out and see what we have in her place. I think people will be pleasantly surprised with what we have there.”

One player who will be leaned on to help fill the gap with Dye’s departure will be Felmas Koranga. Koranga was named to the Preseason All-Sun Belt First Team in October. Last season Koranga finished the season averaging a double-double with 12.8 points per game and 11.1 rebounds. She was named the SBC Newcomer of the Year last season and was named a All-Sun Belt Second Team member.

“Felmas has become a much better scorer,” Rigby said. “She has taken on the role of not only consistently scoring more inside, but she has developed her outside game from the 3-point line.”

When the Trojans step on the court to start the season they will do so with some lofty goals in mind.

“We want a three-peat,” Rigby said. “We need another Sun Belt Championship to get back to the NCAA Tournament and win in the tournament. The only way really to do that is have a better seed in the tournament.”

The Trojans will start trying to accomplish those goals on Tuesday when they take on the Tornadoes beginning at 5:30 p.m. it can be seen on ESPN+.

Trojans retain the belt with a win over South…