Banged up Trojans retain belt with win over Jags 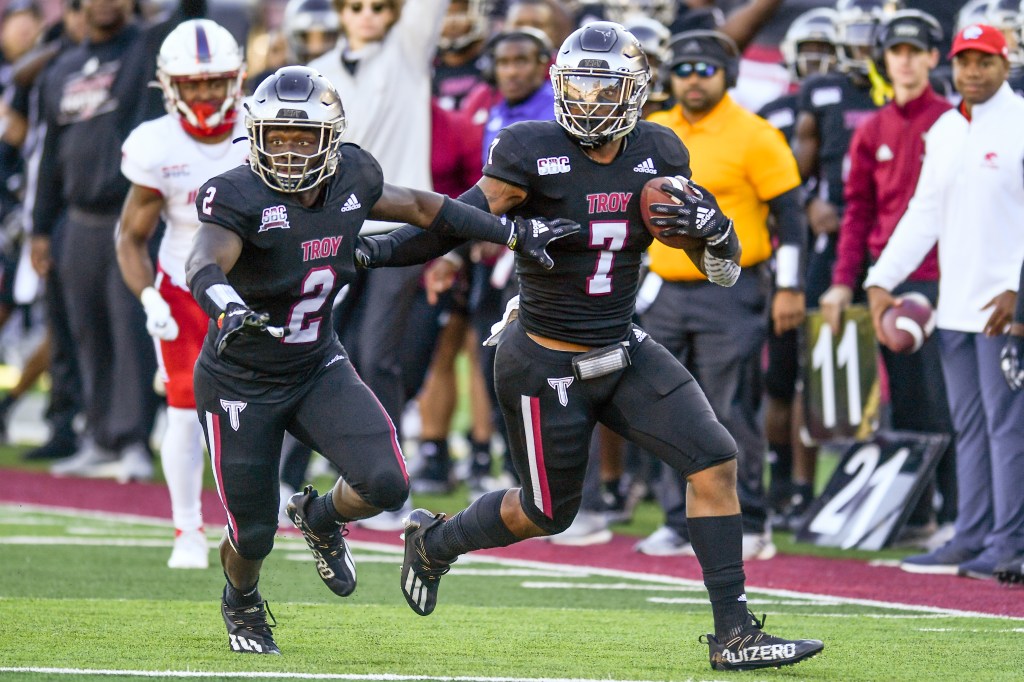 A banged up Troy Trojan team retained the belt for the fourth consecutive year when they knocked off in-state rival South Alabama on Saturday afternoon.

The Trojans knocked off the Jaguars 31-24, but got nicked up along the way. Several prominent players, both on offense and defense, were forced to leave the game.

“I thought we got off to a great start, really all around, offense, defense and special teams,” Lindsey said. “We were missing some guys and we lost some guys throughout the game, but that’s part of it. Next man has to step up and we recruited hopefully to build some depth for these types of situations and some of those guys paid off today.”

Quarterback Gunnar Watson, linebacker Carlton Martial, running back Kimani Vidal and receiver Luke Whittemore were among those who sustained injuries.

“That is something that hasn’t showed up,” Lindsey said. “We’ve been pretty healthy. Today (Saturday), I was looking around to see if there was anyone else we could play. When you’re a head coach (somebody) will come by and say so and so are out. Some games this year I had none of those conversations. Today (Saturday), I feel like I had five, six or eight. Hopefully none of them are very serious.”

Watson sustained a head injury in the opening half, giving way to back-up and former starter Taylor Powell. Vidal also left Saturday’s game due to a head injury. Martial left the game with a quad contusion and Whittemore exited after hurting his knee during a big catch along the sideline in the fourth quarter.

“Hopefully we will get some guys back healthy this week,” Lindsey said.

Before exiting the game, Watson completed 11 of his 14 passes for 121 yards. Powell, in limited action, completed six of his 11 passes for 80 yards and he threw an interception.

“I really thought Taylor came in, with the exception of a miscommunication down the field, and handled himself pretty well, executed and we were able to get the win,” Lindsey said. “Taylor is still not 100  percent healthy. He has fought through some things to get as healthy as he can. He is a great teammate; he and Gunnar are close. If Gunnar isn’t ready to go, I have no problem with him playing. He ‘s doing a great job helping us. He’s a team guy. “

Vidal finished his day with five carries for 29 yards. B.J. Smith finished with a team high 12 carries for 49 yards.

Tez Johnson led the Troy receivers with four catches for 46 yards. He also had a rushing touchdown of 31 yards.

Despite getting injured, Martial finished with a game high 14 tackles.

The Trojans remain at home on Saturday when they take on Louisiana on homecoming. Kickoff is set for 2:30 p.m.