Trojans look to extend winning streak over their in-state rival 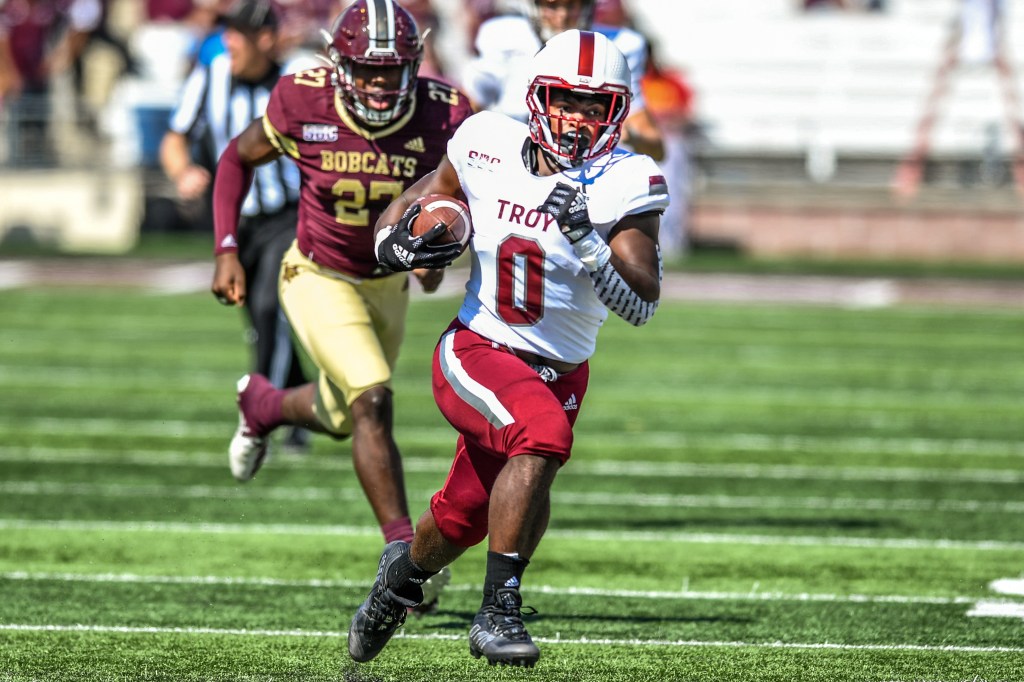 Contributed photo/Troy Athletics | The Messenger Kimani Vidal runs for a touchdown against Texas State earlier this season. Vidal and the Trojans host South Alabama on Saturday.

The latest installment of the Battle for the Belt will be played on Saturday afternoon when the Trojans host in-state rival South Alabama at Veterans Memorial Stadium.

It will be the 10th meeting between the two rivals. The Trojans hold a 6-3 lead over the Jaguars and are currently on a three-game winning streak.

“The belt is at home right now, and we look forward to keeping it here,” offensive lineman Dylan Bradshaw said. “We are ready for the challenge, and we are dialed in and focused.”

The Trojans return home after playing their last two games on the road. The Trojans fell to Coastal Carolina last Thursday to drop to 4-4 on the year and 2-2 in region play.

“It’s going to feel good to play three games at home, starting with the Battle for the Belt against South Alabama,” Troy head coach Chip Lindsey said. “It’s going to be a challenge because each and every week is a dog fight, but we will be ready.”

This season, the Jaguars are 5-3 overall and are coming off a comfortable win over Arkansas State.

Saturday’s contest pits two of the top defenses in the Sun Belt Conference against each other in Troy and South Alabama. The Trojans are allowing 110 yards on the ground and 314 yards per game. The Jaguars have allowed 118 rushing yards and 320 yards per game.

Kane Wommack is in his first year as head coach at South Alabama and Lindsey believes the defensive-minded head coach has the defense playing like one of the best units in the conference.

“I think he is doing a good job getting his philosophy in place,” Lindsey said. “He is a defensive guy, obviously they are really good on defense. I think our defense and theirs will be the two best defenses in the league if you look at stats.

“What I see when I turn the game on is a defense that really plays physical and runs to the ball.”

The Troy Trojan offense enters the game on a bit of roll, especially in the run game. Kimani Vidal led the Sun Belt Conference averaging 120 yards in the month of October. He has rushed for over 100 yards in back-to-back contests.

“The last few weeks we have really been able to get him going,” Lindsey said. “He has been healthy and that’s been the number one thing. He continues to run the ball inside the tackles. He usually makes the first man miss.

“For us to be successful, he needs to get plenty of touches. That will be our plan as we play out the rest of the season.”

The South Alabama offense is averaging 29 points per game, third best in the conference. The offense is led by quarterback Jake Bentley, who has completed 69 percent of his passes this season for 2,073 yards and 15 touchdowns. He has five interceptions.

“He is playing outstanding and seems to be making really good decisions,” Lindsey said. “They are protecting him pretty well. He is another veteran guy, who was a starter at South Carolina. Anytime you have a veteran quarterback, who is making good decisions you have a chance.”

Bentley has an opportunity to throw to one of the top receivers in the conference in Jalen Tolbert. The junior has 54 catches for 967 yards and six touchdowns. He leads the conference with 6.8 receptions per game. He also leads the league with 120 receiving yards per game.

“He is one of the best receivers in the country,” Lindsey said. “He has been a really good player in this league for a long time. I thought we did a pretty good job last year of limiting him, but he still made a few plays. He is a guy we need to make sure we have a plan for and don’t let him run free.”

Troy’s win over South Alabama in 2019 at Veterans Memorial Stadium snapped a three-game winning streak for the road teams in the rivalry. They defeated the Jaguars last season in Mobile.

Troy’s three-game winning streak is the longest by either team in the short history of the rivalry.