Pike steamrolls their way to second round 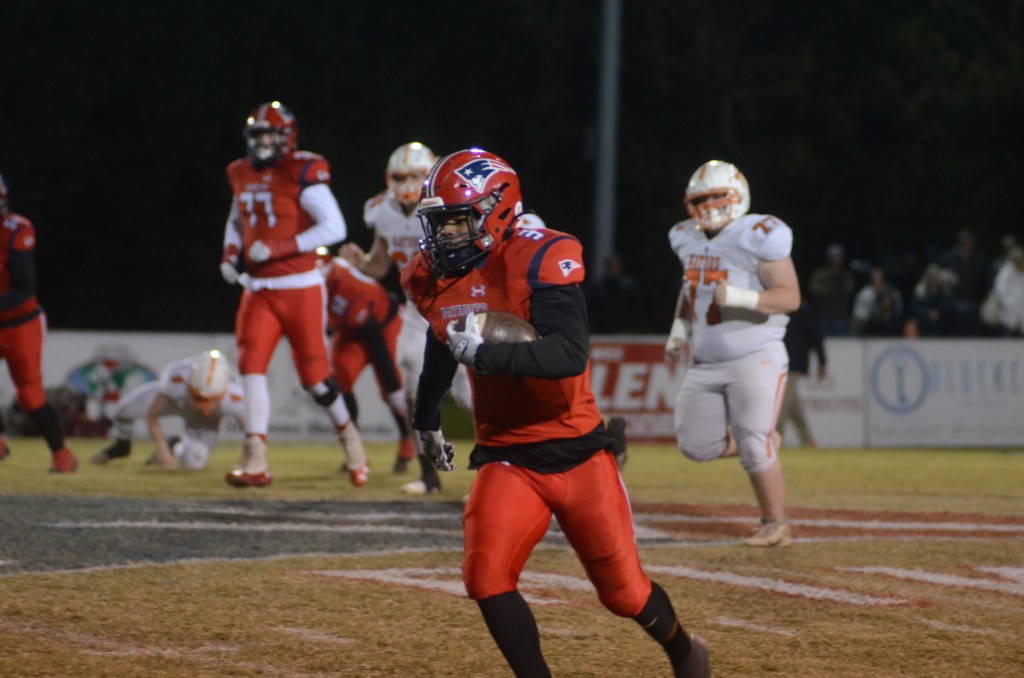 Mike Hensley | The Messenger Pike Liberal Arts running back Zakevin Pennington races his way for a touchdown against Clarke Prep.

The Pike Liberal Arts Patriots advanced to the second round of the AISA Class 3A state playoffs on Friday night with a convincing 55-0 win over Clarke Prep.

The Patriots have now advanced beyond the first round of the playoffs in back-to-back seasons. They won the AISA state championship last season.

Despite scoring more than 50 points and totaling nearly 400 yards, head coach Mario White believes the team still has a lot to work on.

“I feel like we had some lapses,” White said. “I feel like there are a lot of things we can improve on. That’s the beauty of tonight’s game. We have to  stay focused on defense and focus on our responsibilities on offense. We kind of needed tonight as far as us being able to see what we are doing wrong and what we need to fix.”

The Patriots scored in all but one of their first half possessions and went into halftime holding a 35-0 lead.

The defense got the Patriots going in the opening possession. Zakevin Pennington picked off a Gator pass, giving Pike possession.

On the first play of their drive, Pennington raced his way for a 52-yard run, setting the Patriots up inside the Gator 10. Two plays later, Pennington rumbled his way in for a one-yard score.

The Patriot defense forced a Gator punt on the next drive. Standing on his own 20, Ian Foster raced his way for an 80-yard punt return touchdown and the Patriots led 14-0 midway through the first quarter.

Like Pennington, Kam Baker had an interception that he later turned into a Patriot touchdown.

Baker’s interception set the Patriots up near midfield. After a Patriot penalty, Baker took a Cason Eubanks hand off and finished the drive with a 53-yard touchdown.

The Patriots went into the second leading 21-0.

The Patriots had their longest drive of the first half on their next possession. The Patriots’ drive lasted six plays and they traveled 60 yards, ending with a five-yard reception by Mario Davenport.

The Patriots closed their first half scoring with a 21-yard run by Eubanks, bringing the score to 35-0.

With a running clock, the Patriots scored on their first second half possession. After K.C. Bradford had his kickoff return touchdown negated due to sideline interference, Eubanks had his second touchdown of the game, this time from two-yards out and the Patriots led 42-0.

Robert Williams had a 60-yard run and Markelis Hobdy had a 24-yard line to finish the scoring for the Patriots.

The Patriots finished with 380 total yards, 344 of which came on the ground. Pennington led the way with 106 yards on six carries. Eubanks completed four of his seven passes for 36 yards.

Gavin Williams led the defense with seven tackles, Keith Williams had five and Hobdy had four.

The Patriots will host Glenwood on Friday in a rematch of last season’s championship game. The Patriots defeated Glenwood earlier this season.