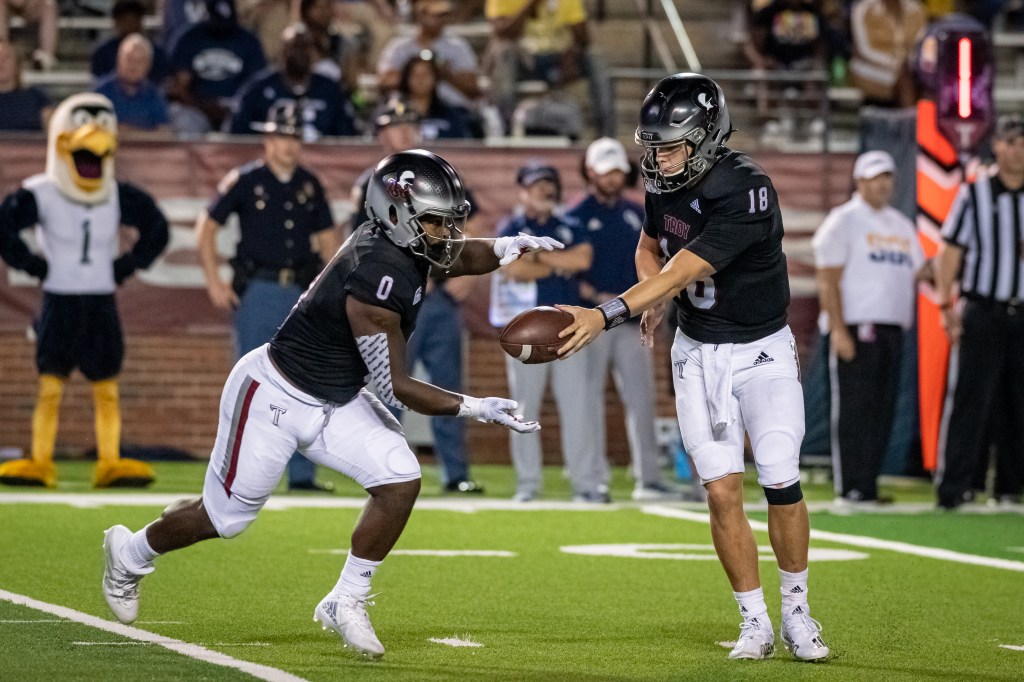 After a slow start to the season, the Troy ground attack is starting to rack up the yards.

It was a slow start to the season for a running back group expected to be one of the conferences best and deepest.

Led by Kimani Vidal, B.J. Smith and Jamontez Woods, the Trojan run game stalled out of the gates this season.

The Trojan running backs began the season averaging 98 yards per game over the course of the first five games. They had 163 yards in the opener against Southern and followed that up with 54 yards in game two, 91 in game three and 85 in game four.

Since Troy’s loss to ULM, the Trojans run game has turned the corner. In the last four games, the Troy running backs have averaged 177 yards on the ground.

The Trojans rushed for 180 yards against Coastal Carolina last Thursday, 142 of which were picked up by Vidal.

“I was pleased with the way we ran the football,” Lindsey said. “Vidal had another big game.”

The Trojans still rank near the bottom of the league in rushing yards per game as a team. They are ninth best in the conference averaging 119 yards per game.

Vidal has led the ground attack in recent weeks, rushing for 162 yards against Texas State and 142 yards against first place Coastal Carolina. He has three touchdowns in the last two games.

“Kimani is obviously a really talented guy,” Lindsey said. “The last few weeks we have really been able to get him going. He has been healthy and that’s been the number one thing. He continues to run the ball inside the tackles. He usually makes the first man miss. Kimani is a complete back who can catch it and who can pass protect.

“For us to be successful, he needs to get plenty of touches. That will be our plan as we play out the rest of the season.”

Vidal has 592 rushing yards this season on 116 carries, good enough for five yards per carry. Vidal has five touchdowns.

B.J. Smith has 265 yards rushing this season and three touchdowns.

Lindsey gives credit to the offensive line for the sudden surge in the running game. Dylan Bradshaw and the rest of the lineman took it upon themselves to get the run game going in the right direction.

“I think it all starts with coming to practice with the right attitude,” offensive lineman Dylan Bradshaw said. “We had four guys returning from last year. We really started the year off not playing as well together. I think me, Stidham, Jake, Grant and Deandre had to take a look in the mirror and figure out what we were doing wrong. We just had to raise our standards. We knew it wasn’t going to just come to us, but we decided we had to work together and find a way to mesh. Over the past three weeks I feel like we have finally grown together. The run game is the pride of the offensive line. We knew we had to get better and we are still trying to do that.”

The Trojans will have both opportunity and challenges running the football in the final four games of the season. The Trojans will take on the second best run defense in the league in South Alabama on Saturday. They then take on the sixth-ranked rush defense a week later when they take on Louisiana. They close out the season against the third best unit (Appalachian State) and the seventh best unit (Georgia State).