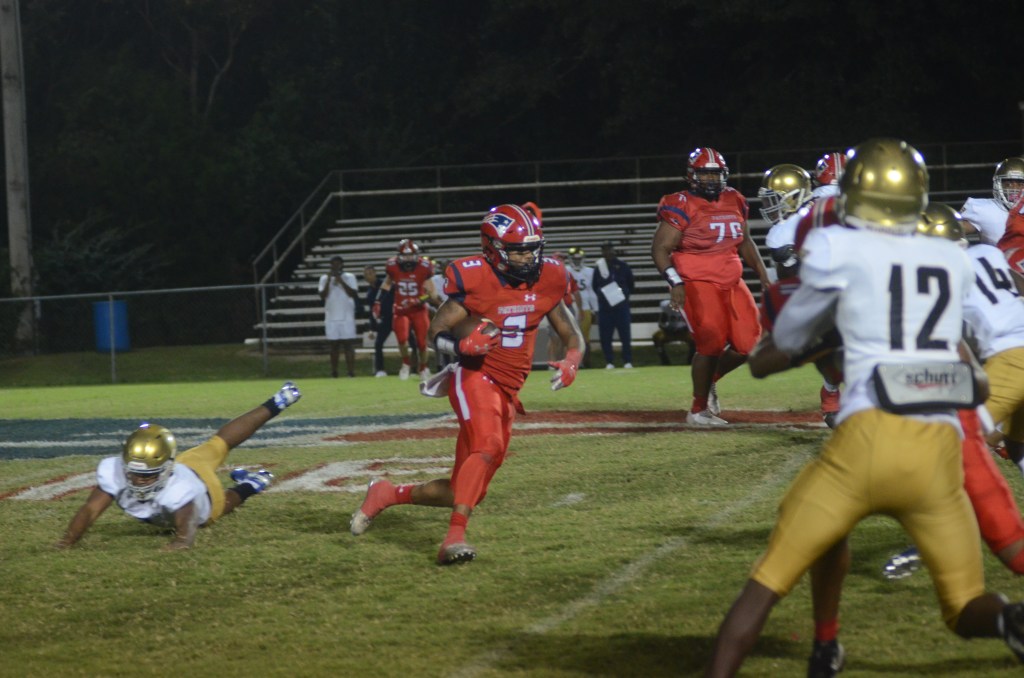 Mike Hensley | The Messenger Zakevin Pennington runs the football for the Patriots against Valiant Cross earlier this season.

Postseason football has arrived and the Pike Liberal Arts Patriots are ready to defend their 2020 AISA State Championship when they host Clarke Prep in the opening round of the state playoffs.

The Patriots advanced to the postseason for the second consecutive season and for the fifth time in the last six seasons. They finished the year 9-1 and concluded play on a nine-game winning streak.

In doing so, the Patriots took home their first region championship in over 10 years.

“We don’t look at how many games we have won in a row,” White said. “It’s a week-to-week sort of deal. It’s a one game season every week. We do it that way so when we get into the playoffs we are ready to go.”

The Patriots’ first place finish in the region secures them home field advantage in each of the first two rounds of the playoffs, beginning with Friday night’s matchup against the Gators of Clarke Prep.

“It’s a huge deal,” White said. “One thing about Pike Lib, when I have coached against them or with them, they always have a huge following. It’s always great to be home. We always have great people here.”

The Patriots have seen plenty of success on both sides of the ball this season. Cason Eubanks, Zakevin Pennington, Ian Foster and the Patriot offense is averaging 39.5 points per game, while Frankie Jeffcoat and the Patriot defense has allowed just 10 points.

Clarke Prep enters the game as the number four seed coming out of Region 2. The Gators finished the season 2-8 overall. Both of their wins came in region play before ultimately ending with a 2-3 record.

“Coach (Ashley) Carlisle does a great job,” White said. “He is a very multiple coach. They can get into the Wing-T, they can spread you out and even run a little but of the veer. You have to keep your eyes on your work and know where your feet are.”

The Gator’s have been outscored by their opponents 308-152 this season. The most points they have scored came in their 41-20 win over Monroe Academy.

The Gators have made the postseason 12 consecutive seasons. They haven’t made it beyond the first round since 2016. They went to the Class 2A championship in 2012 and 2013. They lost both games.

The Patriots and Gators last played in 2017 when Pike Lib pulled out a 28-6 win.