Trojans take on Jaguars in latest installment of rivalry 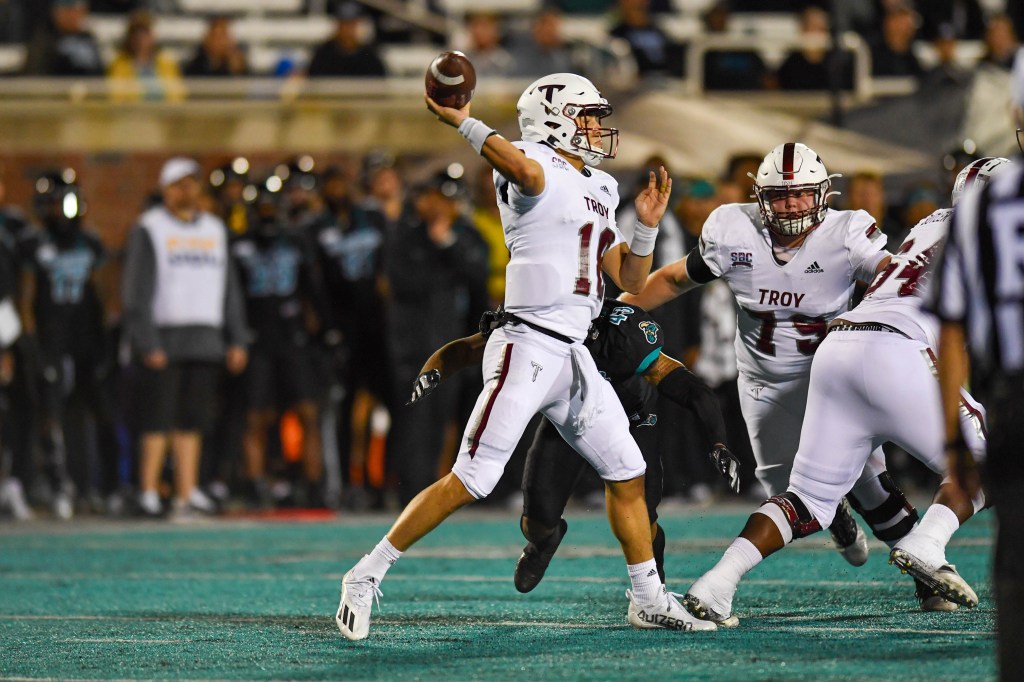 Rivalry week has arrived on the Troy University campus, as the Trojans get set to battle in-state rival South Alabama in the annual Battle for the Belt on Saturday afternoon.

The Trojans and Jaguars will do battle for the 10th time and there will be plenty riding on the outcome of the contest.

Troy returns home after playing two-straight games on the road for the second time this season. They played three-straight road games earlier in the season. The Trojans, after falling to Coastal Carolina last Thursday, are eager to return home this weekend.

“It’s going to feel good to play three games at home, starting with the Battle for the Belt against South Alabama,” Troy head coach Chip Lindsey said. “It’s going to be a challenge because each and every week is a dog fight, but we will be ready.”

There is sure to be plenty of excitement on Saturday afternoon when the fans file into Veterans Memorial Stadium. Lindsey expects the fans to bring the intensity when the team returns home.

“Our players are very comfortable playing here at home and they are looking forward to it,” Lindsey said. “The students show up, and the fans are great at creating a winning atmosphere for our players.”

Last season the Trojans rode into Mobile and knocked off the Jaguars 29-0. It marked the third-straight win for the Trojans in Mobile over the Jaguars. The Trojans have held on to the belt for the last three seasons. The Trojans’ last loss to South Alabama came at Veterans Memorial Stadium in 2017.

“The belt is at home right now, and we look forward to keeping it here,” offensive lineman Dylan Bradshaw said. “We are ready for the challenge, and we are dialed in and focused.”

“South Alabama, I think, is a much-improved football team, very different than they have been the last couple years,” Lindsey said. “Their new head coach is doing a great job getting his philosophy in place and building the program the way he likes it.”

The Trojans, with the loss to Coastal last week, find themselves a game behind the first place Chanticleers in the East Division. With four games remaining in the season, the Trojans are in search of two more victories to become bowl eligible.

“We still have a chance to pull out our side of the conference, but we are going to need some help,” Bradshaw said. “All we can do is control what we can control and that is winning these next four. We know we have our work cut out for us, but if you’re not up for the challenge then what are you doing. We are looking at it as we have a four-game season right here. Lets go 1-0 every week and finish strong.”

“The whole team knows this is a big game,” safety Keyshawn Swanson said. “We have to come prepared and be locked in.”

“This week is all about business.”