Trojans’ bid for an upset comes up short 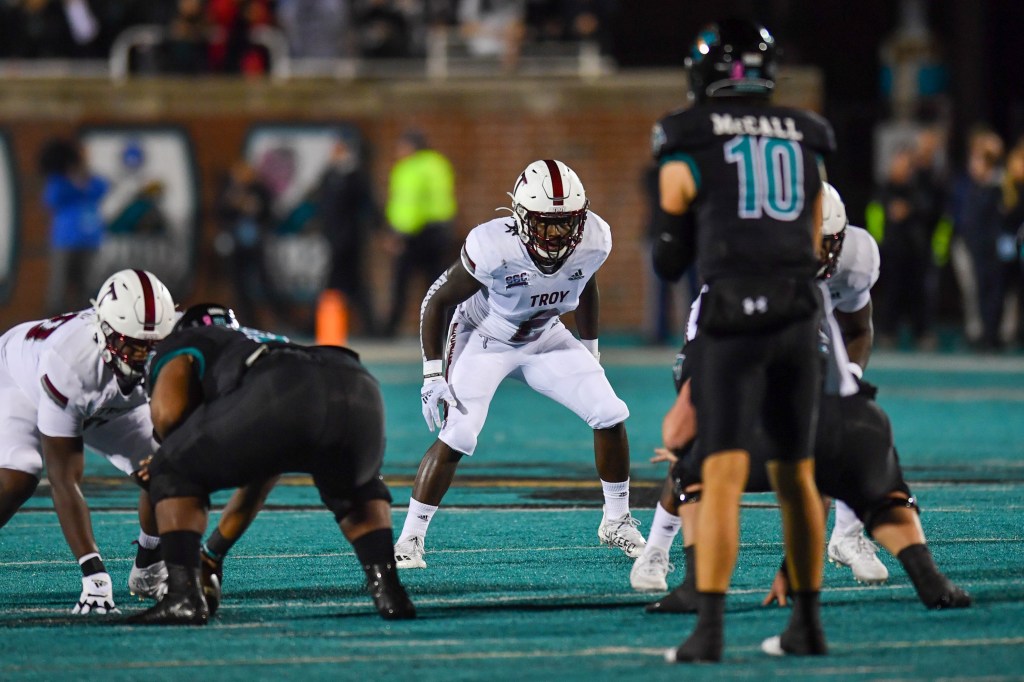 The Troy Trojans had an opportunity to gain first place with a win over Coastal Carolina on Thursday night. The Trojans scored a touchdown in every quarter, but Grayson McCall and the Chanticleers picked up a 35-28 win.

The Trojans drop to 4-4 on the year and 2-2 in Sun Belt Conference play.

The Trojans jumped on the board first and looked to gain control of the game early when Deyunkrea Lewis hauled in a Gunnar Watson pass for an 11-yard touchdown.

The Trojans had an opportunity to go up two possessions when they got into field goal range. A penalty forced a Trojan punt and the Trojans were stuck with seven points.

The Chanticleers took advantage and scored 21 unanswered points to take a two-touchdown lead.

McCall scored on a two-yard run and threw two more touchdowns of 66 and 71 yards.

Watson and the Trojan offense answered with a touchdown of their own when Jabre Baber hauled in a pass and ran his way in for a 42-yard score, sending the game to halftime with Coastal leading 21-14.

Coastal opened the second half with a 14 play, 78-yard drive, ending with a four-yard run by Shermari Jones, bringing the score to 28-14.

The Trojans got back to within seven again when Vidal capped off a strong night with a five-yard touchdown, bringing the score to 28-21.

The Trojans found themselves down 14 again after Jones scored his second touchdown of the night.

Trailing by 14 with under 5:00 to go, the Trojans needed a big score in order to stay in the game. Watson found Tez Johnson in the endzone for an 18-yard touchdown.

With time dwindling down, the Trojans looked to have gotten the ball back with 3:26 remaining, but Coastal converted a fake punt to regain possession.

The Trojans eventually got the ball back with 25 seconds, but a Watson fumble ended Troy’s chances.

Vidal finished with 142 yards on 22 carries to go along with his one touchdown. Watson completed 17 of his 30 passes for 225 yards and three touchdowns.

Johnson led the Troy receivers with four catches for 88 yards.

The Trojans will be back in action next week when they host South Alabama beginning at 2:30 p.m.