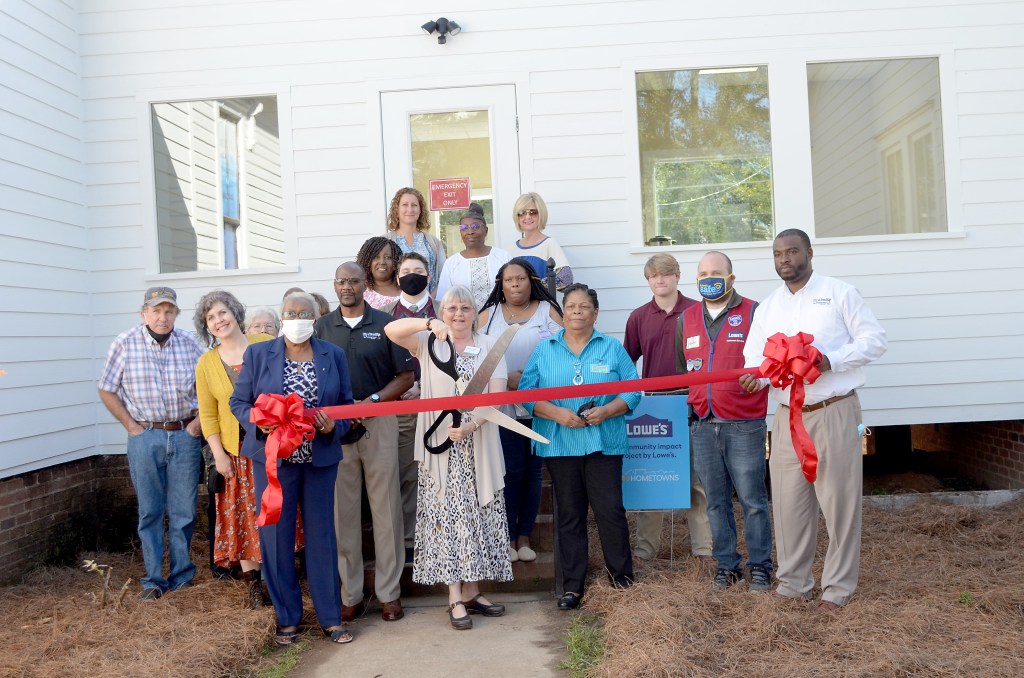 Jaine Treadwell | The Messenger The Pike County Chamber of Commerce hosted a ribbon cutting for the buildings’ connector project at the Tupper Lightfoot Memorial Library in Brundidge Friday afternoon. The project was made possible by a Lowe’s 100 Hometowns Grant. City officials, library staff, patrons and community members attend the special event. Theresa Trawick, library director, cut the ribbon to open the new project.

Sometimes it takes a village to fulfill a dream. On Friday afternoon, a village came together to celebrate a dream come true in Brundidge.

The Tupper Lightfoot Memorial Library in Brundidge celebrated the completion of a buildings’ connector project funded by a Lowe’s 100 Hometowns Grant.

The grant made it possible to join the library’s two buildings with an enclosed area, replacing the open walkway between the buildings

Theresa Trawick, TLML director, said enclosing the walkway had been a desire of the library board and the city administration for years.

“Our main concern with the open walkway was safety,” Trawick said. “There was also the concern of staffing. Having to staff two buildings was not always possible so we would then have to close one building. The Lowe’s 100 Hometowns Grant made it possible for us to alleviate both of those concerns.” Trawick said every department within the city participated in the project and every department shares in showing appreciation to Lowe’s for making the buildings’ connector project a reality.

“Everybody pitched in to do what had to be done and we got it done – together,” Trawick said. “It would not be possible to name everyone who contributed to the project because it was truly city-wide project made possible by the Lowe’s grant.

Brundidge Mayor Isabell Boyd said, from the grant application process until the last nail was driven, the buildings’ connector project was a citywide undertaking.

Brundidge City Manager Willie Wright was the project manager for the Lowe’s project and was diligent in making sure the project was completed on time. The efforts of Barry Rich, Lowe’s store captain, provided the leadership necessary from that perspective of the grant. The actual construction was done by Bell Construction of Ramer.

The buildings’ connector provides safe access between the library’s two buildings and additional storage space. The area includes a sitting/reading area and a coffee bar.

Nancy Pack, director of the Alabama Public Library Service in Montgomery, said the Brundidge library was one the states outstanding small libraries with a great staff. She expressed appreciation for the grant funds that made the library a safer and more inviting place to serve its patrons.