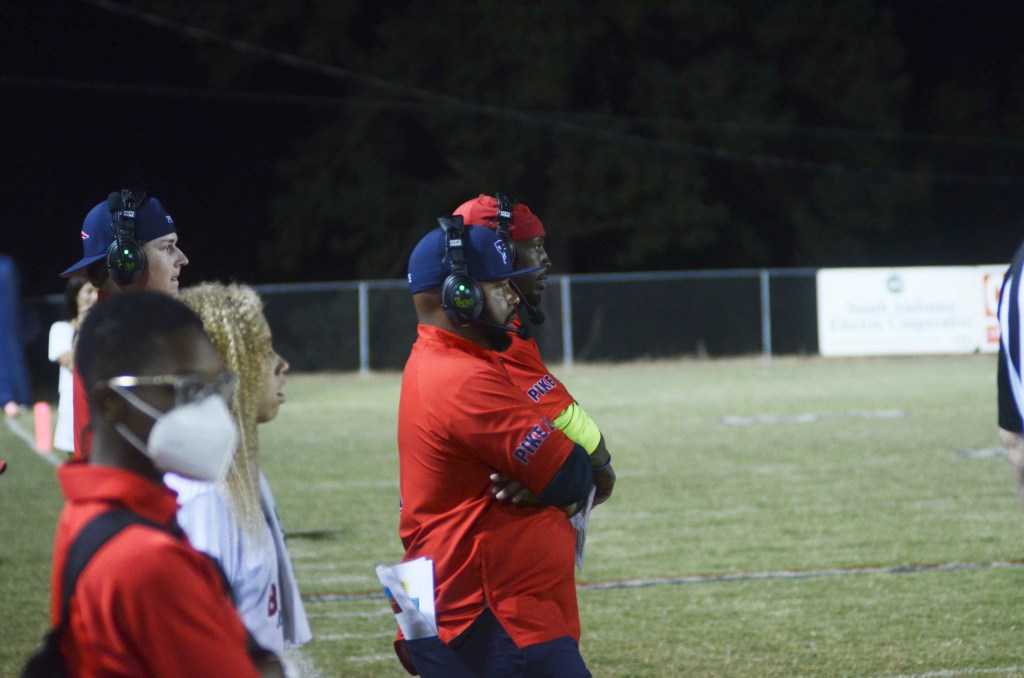 The Pike Liberal Arts Patriots secured a region championship with a 49-13 win over the Glenwood Gators on Friday night.

The Patriots finished off region play undefeated at 4-0.

“Last year those guys (Glenwood) came down and spoiled our homecoming,” head coach Mario White said. “They won the region championship last year with that win. This year, one of our main goals was to win the region first. We haven’t done that since 2009. It was important for us to that.”

The game was tight early with both teams scoring a touchdown in the opening quarter before going into the second tied at 7. The Patriots gained a comfortable advantage in the second quarter by outscoring the Gators 28-0 and went into halftime leading 35-7.

Following a big catch by Mario Davenport, the Patriots took an early lead when quarterback Cason Eubanks ran in from one yard out and Pike lead 7-0.

In the second quarter, Eubanks connected with Aaron Greenwood for a 48-yard touchdown, putting the Patriots up 14-7.

Eubanks scored his second rushing touchdown when he rumbled his way in for a 51-yard touchdown.

Ian Foster got into the act in the second quarter when he caught a Eubanks pass and scored from 40 yards out.

Kam Baker sent the Patriots into the locker room with a 35-7 lead when he scored on a four-yard touchdown run.

The Patriots had two rushing touchdowns in the second half, both by Zakevin Pennington, one from seven yards out and one from 12 yards out.

The Patriot offense finished with 426 yards of total offense, 296 of which came on the ground. Eubanks led the ground attack for the Patriots, finishing with 92 yards to go along with his two scores.

Eubanks completed three of his five passes for 130 yards.

Greenwood’s one catch for 48 yards led the way for the Patriots.

“Cason is really coming into his own in our system,” White said. “Dee (Brundidge) had a really good game plan and the guys worked hard all week long. He put him  (Eubanks) in a position to succeed and he is a great athlete.

“Ian Foster had an opportunity to go head-to-head with AJ Harris. I wouldn’t be surprised if he walks out of that game with Power 5 offers. I thought he played great. It was a complete win tonight. Our offensive line, McCollough had those guys ready. On the defensive side, (Cornelius) Griffin and Mike (Wilcoxin) had those guys ready to play.”

The Patriots will close out the regular season next Friday night when they host Monroe Academy beginning at 7 p.m.