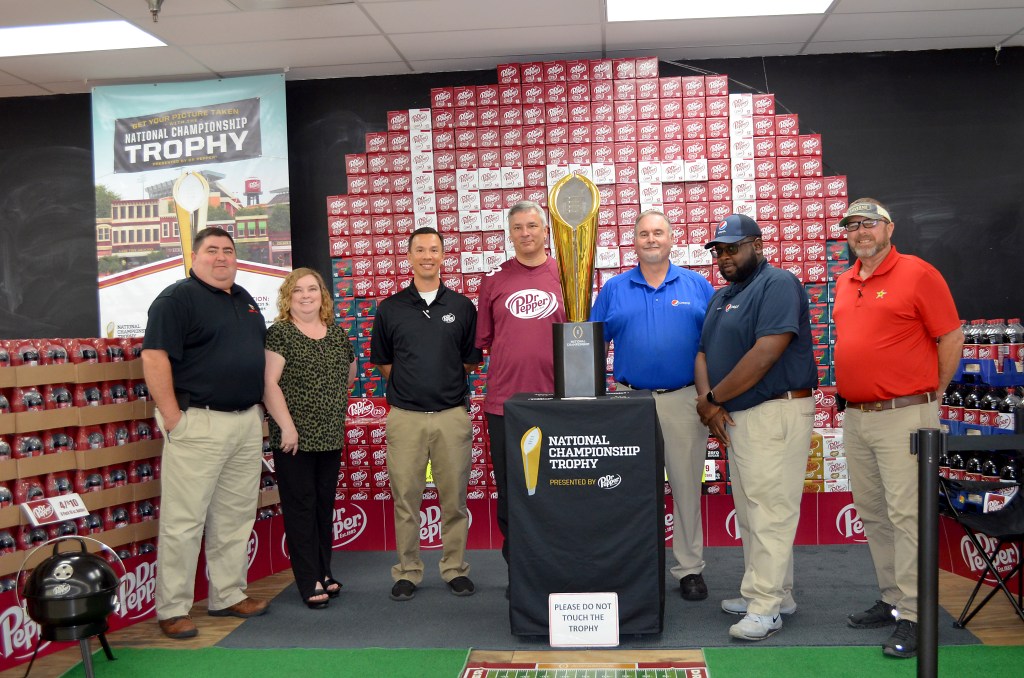 Jaine Treadwell | The Messenger The National College Football Championship Trophy was on display Wednesday at Piggly Wiggly 231. Pepsi/Dr. Pepper in Luverne chose the “Pig” as the place to host the trophy. (Above) Steve and Jennifer Garrett are pictured with the Dr. Pepper Team and the National Championship Trophy. (Below) James and Annie Fenn were among the many who took advantage of the opportunity to have their photos taken with the National College Football Trophy on display Wednesday at Piggly Wiggly 231.

Piggly Wiggly 231 in Troy was a-buzz with activity Wednesday afternoon as college football fans came to have their photos taken with the 2021 National College Football Trophy thanks to Dr. Pepper (Pepsi) of Luverne.

Steve and Jennifer Garrett, store owners, said they welcomed the opportunity to host the National Football Trophy and make it possible for local college football fans to have the opportunity to view the trophy as it tours the country.

“Wherever we go, there is interest in the National Championship Trophy,” Green said. “The Trophy tour begins in August and concludes when it goes home with the newly crowned national champion.  The National College Football Trophy Tour is an attraction for many die-hard college football fans, not just fans of the current national champion.”

The National College Football Trophy is symbolic of the fun and folic of the college football season and, for many football fans, the tour is their only opportunity to see the “crowning” trophy.

Mike Ellis was among those who went to the “Pig” to have his picture taken with the trophy that he hopes will be “at home” in Tuscaloosa come January 10.

“I’ve loved Alabama football since I can remember,” Ellis said. “But, Bama’s defense has got to get better if they have a chance to win it all this year. Georgia’s got a heck of a defense but I think Bama can score. I’d like to see the Tide get this trophy again.”

“The tour has been so popular that it just keeps going,” Judah said. “As long as fans keep filling the football stadiums, I think there will be those who want to see the national championship trophy and have their photos taken with it.”

“All of us at Piggly Wiggly 231 appreciated the opportunity to have the trophy on display here at our store. We were proud to offer the chance to see the trophy to those here in the Troy and Pike County,” communities,” Garrett said. “It was a lot of fun for all of us and to all those who came to view the trophy and have their photos taken.”