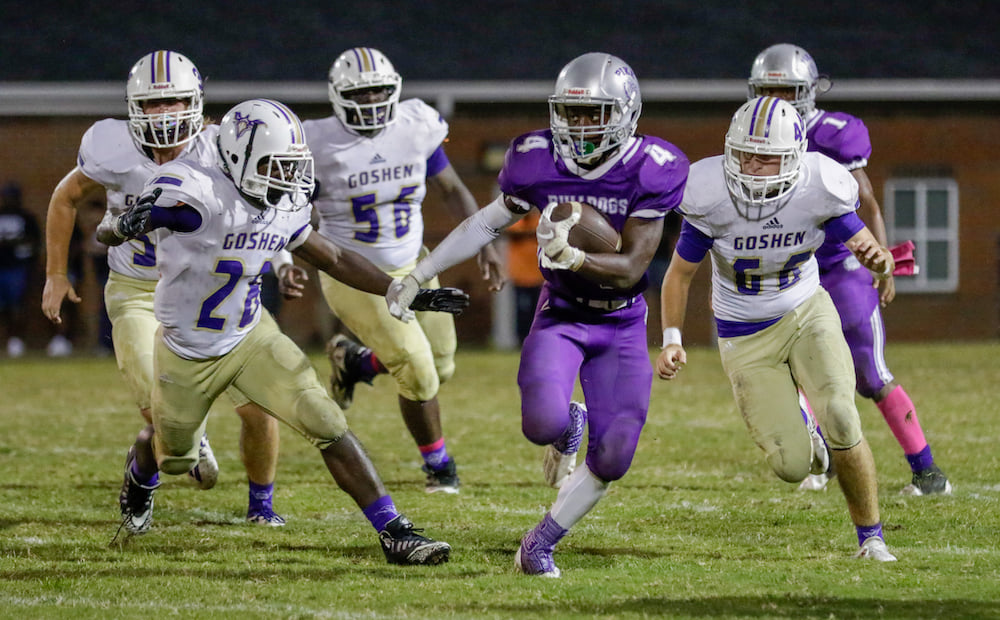 Dan Smith | The Messenger Kentavious Thomas runs away from Goshen defenders in a game earlier this month.

The Pike County Bulldogs and Goshen Eagles hit the road this Friday night to close out region play.

The Bulldogs travel to Reeltown to play the Rebels. The Eagles will not only close out region play against Catholic, but it will also be their season finale.

The Eagles enter their season finale 1-8 on the season. They picked up their first win of the season two weeks ago when they knocked off rival Pike County 15-13.

They will have a daunting task this week when they matchup with the Montgomery Catholic Knights in Montgomery.

The Eagles have struggled at times offensively this season. They are averaging just four points per game this season and have been outscored 358-35. The offense has been shut out in four games this season.

The Knights have had no trouble scoring points this year. They are outscoring opponents 445-20 this season. The Knights are coming off a 52-7 win over Trinity last week. The Knights’ smallest margin of victory came in the opener when they defeated B.B. Comer 35-0.

The Bulldogs have two games remaining in the 2021 season, but just one more region game against Reeltown on Friday night.

Unlike the Eagles, the Bulldogs are still looking for their first win. The Bulldogs are coming off a 50-13 loss against Childersburg last week. The Bulldogs have scored 26 total points in the last two weeks after being shutout in two of the previous three weeks.

Reeltown has secured a spot in the playoffs. They are 4-4 and 4-2 in region play. They are coming off a 36-14 win over Dadeville last week. They are on a two-game winning streak. They defeated Beulah the week prior.

This will be the second ever meeting between the two schools. Pike County picked up a narrow victory over the Rebels last season 21-20.

Both kickoffs are scheduled for 7 p.m.