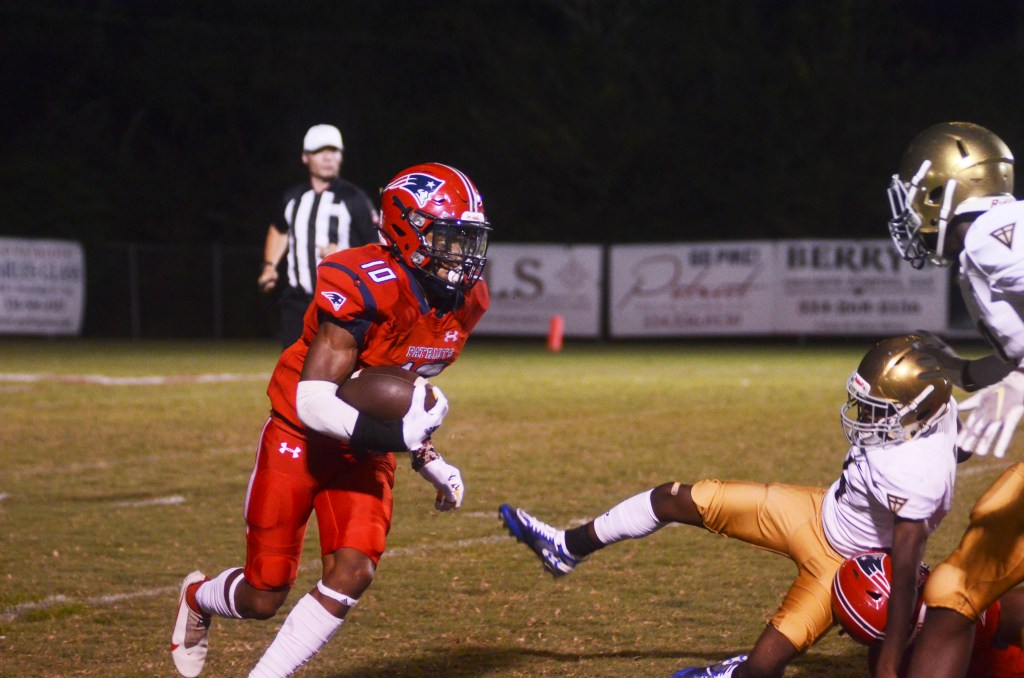 Mike Hensley | The Messenger PLAS receiver Ian Foster runs with the football for the Patriots on Friday night.

There are just two Friday nights left in the 2021 regular season.

The Patriots have a chance to clinch the region championship when they take on the Glenwood Gators in the region finale on Friday night. The Patriots enter the contest undefeated in region play and the Gators enter with a loss against Lee-Scott. A win would ensure a championship for the Patriots; a loss will lead to a three-way tie between the Patriots, Glenwood and Lee-Scott at 3-1.

Overall, the Gators enter the game 5-2 overall and 2-1 in region play. They are coming off a 62-6 win over Hooper Academy last week. They are enjoying a four-game winning streak.

The Patriots are on a seven-game winning steak and are 7-1 on the year.

Charles Henderson returns home one final time on Friday to take on Headland in their region finale.

The Trojans will look to beat a Headland team that is 2-7 overall and is still looking for their first win in region play. They are coming off a 33-22 loss to Rehobeth last week.

The Trojans were forced to forfeit last season’s game against the Rams.

The Goshen Eagles will close out their season on Friday night when they host Catholic on senior night at Eagles Stadium.

After picking up their first win of the season two weeks ago, the Eagles fell to Beulah last week to fall to 1-8 on the year.

The Eagles will take on a Catholic team that has yet to lose this season. They are 9-0 coming off a 52-7 win over Trinity last week. They are outscoring their opponents this year 445-20.

Pike County has two games remaining on their schedule. They close out region play Friday night on the road against Reeltown.

The Bulldogs are looking for their first win at 0-7. They take on a Reeltown team that is 4-4 overall and 4-2 in region play as they look to secure a spot in the postseason. The Bulldogs defeated Reeltown last season 21-20.

The Rebels close out region play against Geneva County in Jack. Like Pike County, the Rebels go into Friday night looking for their first win at 0-8. They take on a Geneva County team that is 4-4 overall and 3-3 within the region.

All games are scheduled to start at 7 p.m.