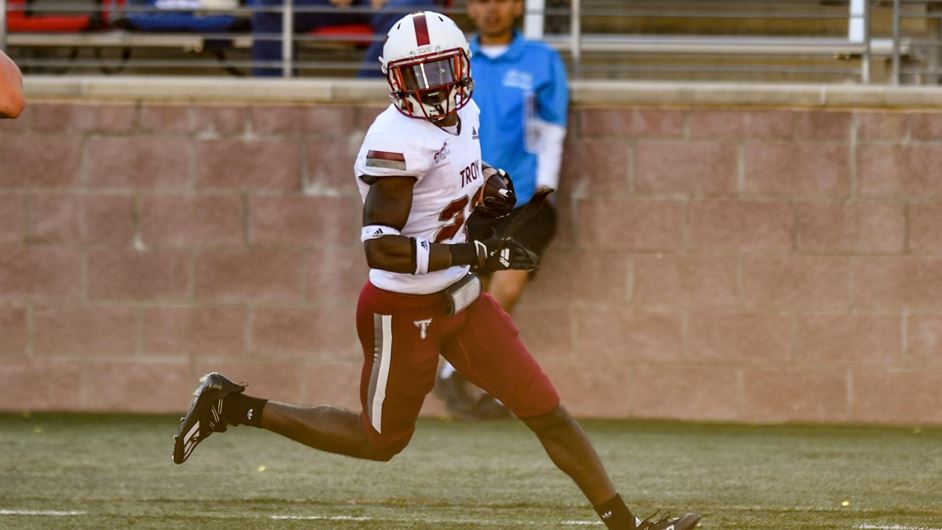 The Troy Trojans picked up their second win in a row on Saturday afternoon when they defeated Texas State 31-28.

For the second week in a row the Trojans were able to clinch a win thanks to a late interception by the Trojan defense.

With the Trojans leading by three, Elijah Culp, whose deflected pass led to last week’s game winning interception, picked off a Texas State pass in the red zone with 6:26 remaining in the fourth quarter.

Keyshawn Swanson picked off a pass and returned it for a 44-yard touchdown for Troy’s final touchdown. Taiyon Palmer also had an interception in the fourth quarter.

The Trojans burned off the final 6:26 off the clock and secured the win. The Trojans improved to 4-3 overall and 2-1 in Sun Belt Conference play.

With the win the Trojans stretch their winning streak against the Bobcats to 10-straight games and they are now 11-1 against Texas State. Texas State’s last win came in 1997.

Quarterback Gunnar Watson got his second consecutive start. Watson finished 22-of-29 for 182 yards and he had one touchdown.

Johnson finished the game with nine catches for 81 yards including his touchdown reception. Johnson’s nine receptions brings his season total to 45, third most by a Trojan since at least 2000 through the first seven games of a season.

Defensively, Carlton Martial led the way with 18 tackles on Saturday. It marks the 15th time in his career that he had double-digit tackle totals in a game. He now has 380 career tackles, good enough for fourth most, passing Naazir Yamini. His 18 tackles was the second most in his career.

TJ Harris also had two sacks against the Bobcats. He now has multiple sacks in two-straight games.

The Trojans are off this week. They will return to action next Thursday when they hit the road to take on nationally ranked Costal Carolina.