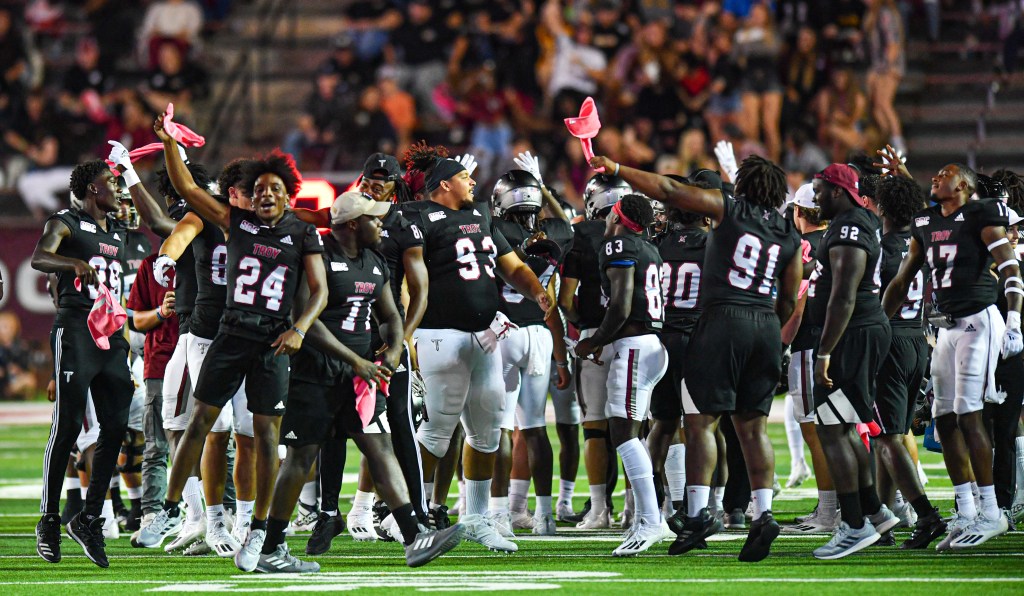 Contributed photo/Troy Athletics | The Messenger The Trojans celebrate on the field during their win against Georgia Southern last week.

The Troy Trojans make the lengthy trip to San Marcos, Texas, this week to take on the Texas State Bobcats on Saturday afternoon.

The Trojans snapped a two-game losing streak last week with a win over Georgia Southern, 27-24. They look to go above the .500 mark in conference play with a win over the Bobcats.

The Trojans led by as many as 21 points in the second half last week, only to let it slip away thanks to 21 unanswered points by the Eagles. A late field goal by Brooks Buce sealed Troy’s first conference win of the season.

“It was definitely an emotional rollercoaster,” head coach Chip Lindsey said. “I thought we got off to a great start on both sides of the football. Really thought we were in great control of the game going into halftime. We missed a tackle on a long catch and run and from that point on it felt like everything snowballed on us. I liked the way our team continued to fight. I thought we handled the adversity as well as we could and we ended up finding a way to win in the end.”

The win for the Trojans brings them to 1-1 in conference play and in a three-way tie for second place in the Sun Belt East Division.

This week the Trojans take on a Bobcat team that is 2-3 overall and 1-0 in league play after they defeated South Alabama in four overtimes last weekend.

“They are a team that is very improved,” Lindsey said. “They are coming off a big win, a home game against South Alabama. At times they have played really well.”

The Trojan defense last week held the nation’s fourth-ranked rushing attack to under 100 yards. It was just the sixth time the Eagles have been held to under 100 yards rushing since they moved to the FBS level in 2014.

The Trojans enter this weekend as the league’s top-ranked unit stopping the run. They are holding offenses to just 96 rushing yards per game. They are first in total defense and second in scoring defense behind only Coastal Carolina, allowing 18 points per game.

The Trojan defense will be tasked with stopping a Bobcat offense that is averaging 330 yards per game and averaging 26 points per game.

“They are capable of scoring a lot of points,” Lindsey said. “The are led by their quarterback Brady McBride who is a true dual threat guy. He has the ability to extend plays, which is always dangerous. He makes you stay in coverage and you have to be disciplined. Our front is going to have to do a great job of keeping him from getting free. When he is on the move he’s a problem.”

Last week the Trojan offense received a shot in the arm in the form of quarterback Gunnar Watson. Watson made his first start of the year replacing Taylor Powell as the team’s starting quarterback against the Eagles. In his start, Watson finished the game 24-of-36 for 270 yards and he had two touchdowns.

The Trojan offense ranks eighth in the league averaging 352 yards per game. Their 24 points per game ranks them sixth in the conference.

The Bobcat defense has allowed 44 points per game the last three weeks. They allow 172 rushing yards per game to go along with 245 passing yards. Linebacker Issiah Nixon stands out as a player to watch according to Lindsey. The freshman has 16 tackles this season, three tackles for loss and three sacks.

“He’s extremely explosive,” Lindsey said. “I’ve been really impressed with him. He’s long, and he’s athletic. I think he leads the country in forced fumbles. He’s a disruptive guy and he leads his team in sacks. To me, he has to be a focal point for us. He is a guy we need to make sure we account for, he can really affect the game.”

This will be the 12th meeting between the Trojans and the Bobcats. The Trojans are 10-1 against Texas State and 3-1 in San Marcos.

“It will be a good football game,” Lindsey said. “It’s a flight this time, instead of a bus ride. That’s refreshing, but we need to make sure we have a plan and be ready to play.”