Trojans host Carroll with plenty on the line 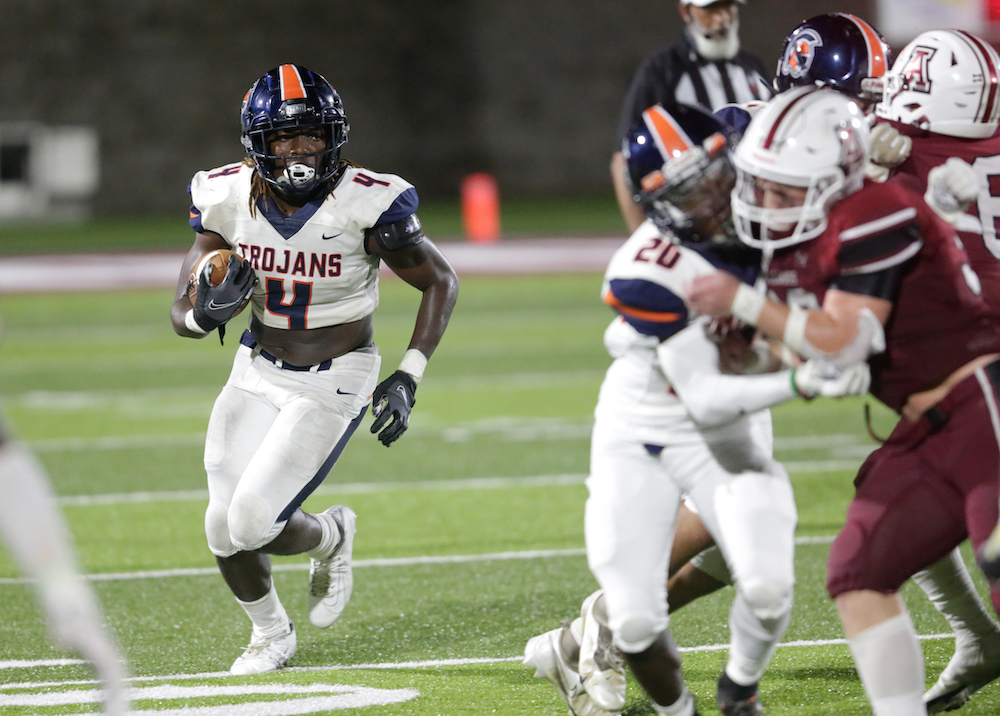 Dan Smith | The Messenger Zach Coleman of CHHS, a sophomore running back, looks for running room against Andalusia Friday night

Charles Henderson jumped into the win column last week. They look to make it two in a row on Friday when they host the Carroll Eagles.

After playing in Rehobeth last week, the Trojans return home to play at Veterans Memorial Stadium.

Last week the Trojans defeated Rehobeth 40-7 to improve to 1-7 on the year.

“I’m glad we got the win,” head coach Quinn Hambrite said. “They played hard, physical and fast. This week has been a long, physical week for them. We gave them Monday and Tuesday off. Yesterday (Wednesday) was probably the best practice I have had with them this year. Looking forward tomorrow night.”

Quarterback Parker Adams led the Trojan offense last Thursday night. He completed 11-of-19 passes for 279 yards. He had four passing touchdowns and rushed for another.

“Parker’s leadership on the field has gotten us to where we are now,” Hambrite said. “The ship doesn’t sail without Parker at quarterback. He’s a great leader for the team. 279 yards in the air could have been more, but we had a lot of penalties in the third quarter. Never the less he played an exceptional game. I can’t say enough about that kid. He has bought in and the kids believe in him. He believes in his teammates and the future is bright for him as it is for all the sophomores that go along with him.”
The Trojans will have another region challenge when the Eagles arrive at Veterans Memorial Stadium. The two teams have met approximately 46 times with the Eagles holding a series lead 29-15-2.

This year’s Eagles are 3-4 overall and 2-2 in region play. They are coming off a 20-7 loss to Greenville last week. The Eagles have lost their last two games after winning their previous three.

“Carroll reminds me a lot of us,” Hambrite said. “They’re fast and at the skilled positions they are really good. Up front I think they’re young. They block really well. Their quarterback is young, a tenth grader. Extremely fast and has a nice arm. They have tall receivers on the outside. Defensively they have a few good linebackers and nice looking defensive backs. They are a well put together team.”

The Trojans will strive for their second region win of the season on Friday. If they do they will be in a tie for the final playoff spot in Region 2. The Trojans defeated the Eagles last season 24-19.