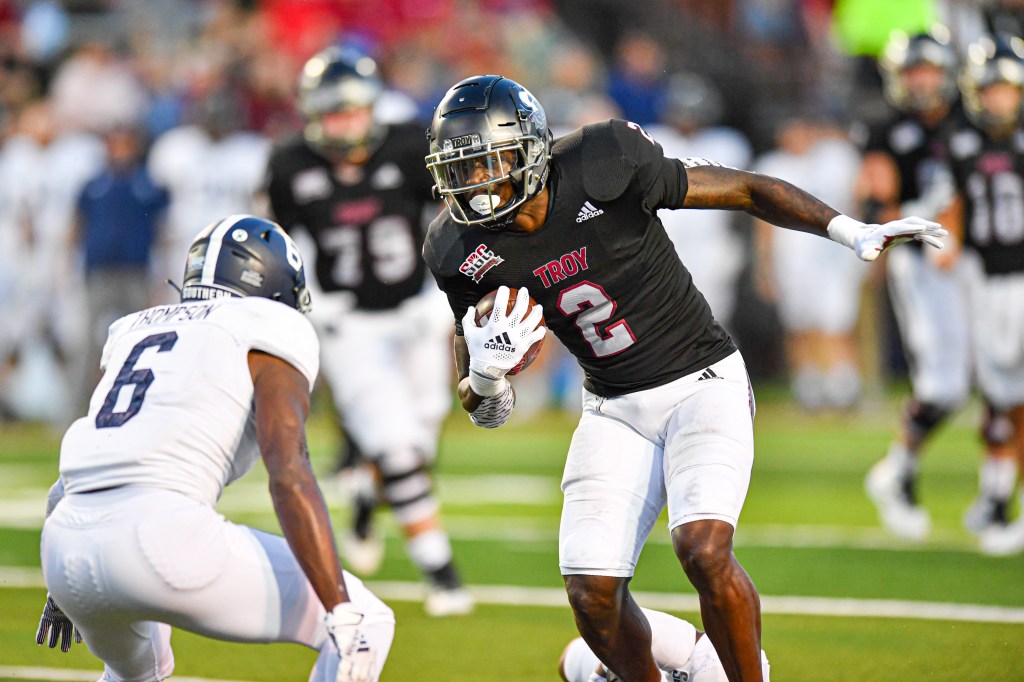 The Troy Trojans snapped a brief two-game losing streak with a 27-24 win over the Georgia Southern Eagles on Saturday evening.

The win for the Trojans improves their record on the season to 3-3 overall and 1-1 in conference play.

The Trojans get back on the road this week to take on Texas State on Saturday beginning at 2:05 p.m.

On Tuesday, head coach Chip Lindsey reviewed Saturday’s win and looked ahead to Saturday’s matchup with the Bobcats.

Troy picks up fourth win in last five tries against the Eagles: It wasn’t always easy for the Trojans in their three-point win over the Eagles. Quarterback Gunnar Watson connected with Reggie Todd for a 26-yard touchdown completion, putting Troy up 24-3 early in the third quarter. The Eagles scored 21 unanswered points to tie the game midway through the fourth quarter.

“It was definitely an emotional roller coaster I would say,” Lindsey said. “I thought we got off to a great start on both sides of the football. Really felt we were in control of the game going into halftime. After halftime the goal was to get a quick stop and then another touchdown we did exactly what we wanted to do, but we missed a tackle on a long catch and run and from that point on it felt like everything snowballed against us for a while until the last drive or two.”

Turnovers and a late kick seals the deal for the Trojans: With the game tied at 21, TJ Harris picked off an Eagle pass, setting up the Trojans on the Georgia Southern 46 with 4:09 remaining. Eight plays later Brooks Buce converted a 24-yard field goal to put the Trojans up by three. With 32 seconds remaining, Elijah Culp deflected an Eagle pass into the waiting arms of Javon Solomon, clinching the win for the Trojans.

“I liked the way the team continued to fight,” Lindsey said. “Handled the adversity the best we could. We ended up finding a way to win the game in the end.”

Buce’s patience pays off with game winning kick: Buce had one field goal attempt heading into Saturday’s game. He doubled that by day’s end with a 29-yard field goal to go along with his game winner.

“When I went out there I tried to clear my mind and think of the one goal which was to get the team the win,” Buce said on Saturday. “Luckily had a good snapper and holder to execute that play.

“As a kicker you always want those attempts, every game. We haven’ been able to hit that many field goals coming into the game. We have been preparing like we are going to every week. When I hit the first one it felt good, but you want more. Getting that last one felt really good.”

Defense holds down Eagle run game: The Eagles entered Saturday’s game averaging 291 yards per game, good enough for fourth in the country. The Trojans held the Eagles to 82 yards. It’s just the sixth time the Eagles have been held to under 100 yards rushing since they moved to the FBS level in 2014.

“We did a great job tackeling regarding the first half,” safety Dell Pettus said. “In the second half we didn’t play as well, but we got it together and got back rolling. It came down to tackling. We did a great job at getting guys on the ground, not letting them have explosive plays.”

Jamontez Woods fills the void at running back: With B.J. Smith out of the game due to injury, it was Woods’ turn at running back. Woods finished the game with a career high 98 yards, most of which came in the first half, and a touchdown. He also had a receiving touchdown.

“I thought Jamontez Woods had a really good game,” Lindsey said. “One of his best games since he has been here. He had about nine or 10 rushes for around 100 yards and a couple touchdowns. Really I thought he did a good job of running in between the tackles, something he has really improved on. He is an explosive guy who will continue to get better and better.”

Gunnar Watson impresses in first start: Watson made his first start of the season on Saturday in place of Taylor Powell. Watson finished the game 24-for-36 for 270 yards and two touchdowns.

“I thought Gunnar Watson played well at quarterback,” Lindsey said. “He took care of the football, made good decisions and really distributed the ball pretty well.”

Trojans taking the wait and see approach at quarterback: During his press conference, Lindsey said he will see how Powell’s injury progresses this week before deciding who will be the starter on Saturday against the Bobcats.

“I think we are gong to wait to see how the week plays out,” Lindsey said. “Taylor not being totally healthy will come into that, but we havn’t practiced, had a light thing on Sunday night, so we will probably know more as the week plays out. Either one would do fine. Gunnar coming off the game he played, you feel really good about him and if Taylor isn’t ready to compete for that job then we feel great with Gunnar.”

Looking ahead: The Trojans will jump on a flight this week and head to San Marcos, Texas. They will take on a 2-3 Bobcats team coming off a four overtime win over South Alabama last week. This will be the 12th meeting between the two schools. The Trojans are 10-1 against the Bobcats.

“They are a team that is very improved,” Lindsey said. “They are coming off a big win, a home game against South Alabama. At times they have played really well.

“It will be a good football game. We need to have a great week of preparation and handle the road trip. It’s a flight this time, instead of a bus ride. That’s refreshing, but we need to make sure we have a plan and be ready to play.”