Local teams gear up for a busy Friday night 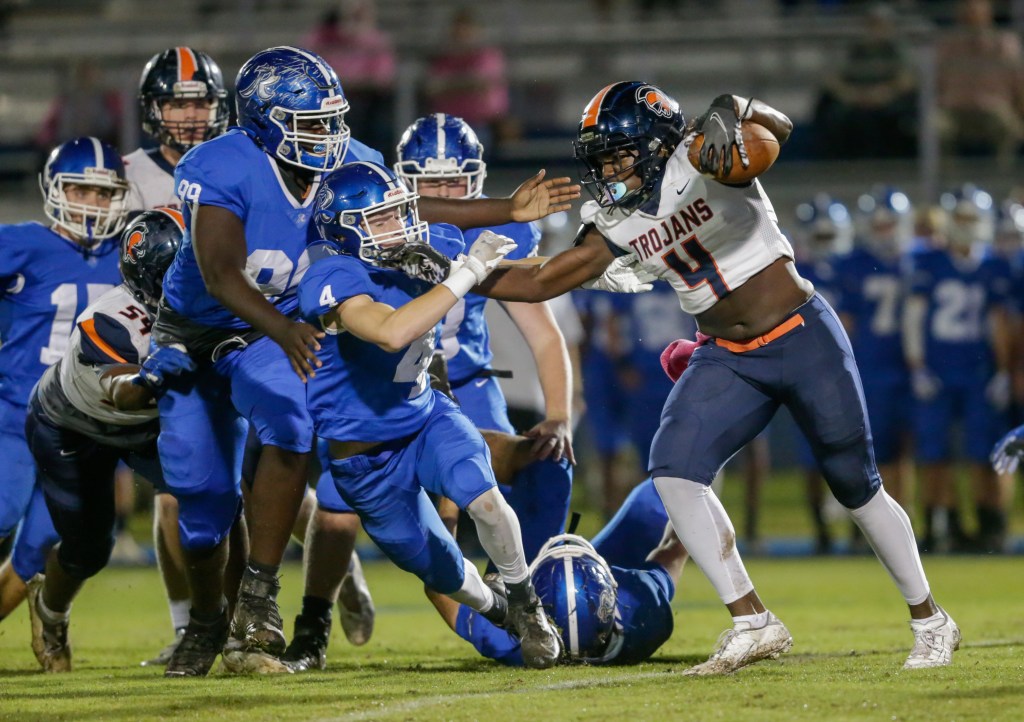 Pike Liberal Arts looks to continue their winning streak and the Charles Henderson Trojans look to build on last week’s first win in what will be a busy Friday night.

The Patriots, Trojans, Pike County, Goshen and Zion Chapel will all be in action this week.

The Zion Chapel Rebels will be the only road team on Friday night as the Patriots, Bulldogs, Eagles and Patriots will all be at home.

The Trojans picked up their first win of the year last Friday night when they defeated Rehobeth 40-7. Parker Adams led the way for the Trojans last week, completing 11-of-19 passes for 279 yards and four touchdowns. He added a rushing touchdown.

This week the Trojans welcome in region foe Carroll to Veterans Memorial Stadium. The regional rivals have met unofficially 46 times with the Trojans leading the series 29-15-2.

Carroll comes into the game having lost to Greenville last week, 20-7. The Eagles have dropped to 3-4 on the season and 2-2 in region play.

The Pike Liberal Arts Patriots are coming off a bye week and look to extend their winning streak to seven games. The Patriots are 6-1 on the season after they defeated Tuscaloosa Academy two weeks ago, 42-14. The Patriots trailed 14-0 early in the game, but scored 42 unanswered points. Quarterback Cason Eubanks completed eight of his 13 passes for 123 yards. He rushed for 106 yards on 10 carries.

The Patriots will take on a Valiant Cross team that is 2-3 on the year. They are coming off a 16-0 loss to Lee-Scott last Friday.

This will be just the second meeting between the two schools. The Patriots defeated the Warriors last year, 41-6.

The Goshen Eagles picked up their first win of the season last Friday night against county rival Pike County, 15-13. Szemerick Andrews led the Goshen offense with 148 yards on 19 carries and had a touchdown. On defense, Andrews finished with seven tackles.

The Eagles will return home on Friday to host Beulah in another region contest. Beulah enters the game with one win on the season, against Pike County. The Bobcats fell to 1-6 last week with a loss against Reeltown.

In Pike County’s loss to the Eagles last week, Kentavious Thomas finished with 18 carries for 159 yards.

The Bulldogs welcome in Childersburg this week. The Tigers are coming off a 44-0 loss to Catholic last Friday night and are 2-5 on the year.

The Bulldogs defeated the Tigers 43-7 in their first ever meeting last season.

The Rebels return to action on Friday night to take on Cottonwood. The Rebels dropped to 0-7 last week with a loss against Ariton.

Cottonwood is 4-4 this season after they fell to G.W. Long last week. Their loss last week snapped a two-game winning streak for the Bears.

The Rebels are 0-4 all-time against the Bears. Cottonwood defeated the Rebels 44-21 last season.

All games are scheduled to start at 7 p.m.–