Watson leads Troy to win in first start of the season 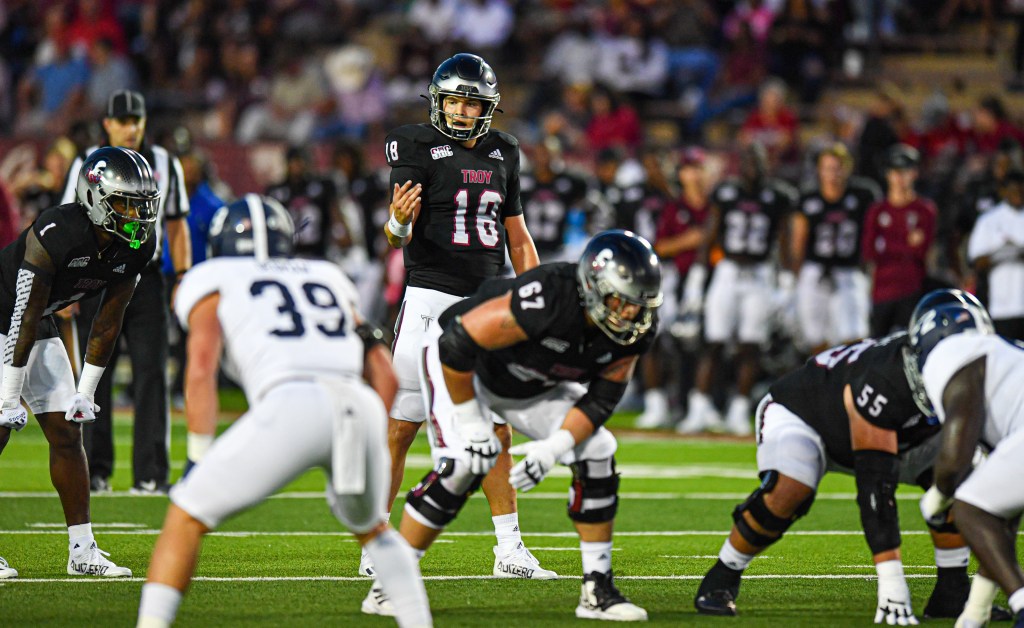 Troy quarterback Gunnar Watson admits he was nervous in advance of making his first start of the year on Saturday against Georgia Southern. Thanks to a strong start, Watson was able to lead the Trojans to a win against conference foe Georgia Southern.

It wasn’t always easy for the Trojans in their 27-24 win on Saturday. They held a 21-point lead in the second half, only to see it vanish thanks to 21 unanswered points for the Eagles.

Kicker Brooks Bruce nailed a 24-yard field goal and Javon Solomon picked off an Eagle pass on a deflection by cornerback Elijah Culp to secure the three-point win.

“Taylor obviously was banged up,” Lindsey said. “I thought it would be nice to give us a shot in the arm. With Taylor not being 100 percent, it made that decision kind of easy. I’m really proud of Gunnar. He is a guy who is special.”

Watson completed all four of his throws in the opening possession and finished the first quarter completing 12-of-16 passes and had a 15-yard touchdown pass to Jabre Barber.

“I was nervous about the game,” Watson said. “I got settled in and ready to go. After a few completions here and there you get going.”

After a strong first half, Watson and the Trojan offense sputtered at times in the third and fourth quarter. Watson finished the game completing 67 percent of passes to go along with 270 yards and two touchdowns.

After starting the first five games of the season, Powell entered last week a little banged up and wasn’t able to get reps in during practice heading into Saturday’s game.

“Taylor was banged up on Sunday after South Carolina,” Watson said. “He didn’t get practice reps this week with his knees banged up. I knew about on Wednesday when he didn’t practice. I just kept going and practicing, trying to practice hard.”

Watson played in nine games a season ago and completed 70 percent of his passes for 2,141 yards. He had 16 touchdowns and seven interceptions.

Powell transferred in from Missouri and arrived on campus in the spring, starting a battle for the starting quarterback spot that lasted until just days before Troy’s opener against Southern. Although he didn’t win the battle, Watson kept working, keeping the mentality that he could start any week.

“His attitude has been great,” Lindsey said. “He’s practiced and prepared every single day like he was the starter. He waited his turn and in this day and age that’s not common. A lot of guys get mad, pack up and leave. He has been raised by great parents, and I think that has a lot to do with it. He just stayed ready. He kept fighting and ‘repping’ in practice. What people don’t know is that in the last two weeks he had the best two weeks of practice that I have seen him have. Love the way he responded.”

During his time as a backup Watson made sure he was a good teammate and aid to Powell.

Watson is seen as a leader to his teammates including running Jamontez Woods.

“Gunnar is a great leader,” Woods said. “He obviously puts in the work and does the things coach asked him to do.”

Buce kicks Trojans to a 27-24 win over Georgia…