Buce kicks Trojans to a 27-24 win over Georgia Southern 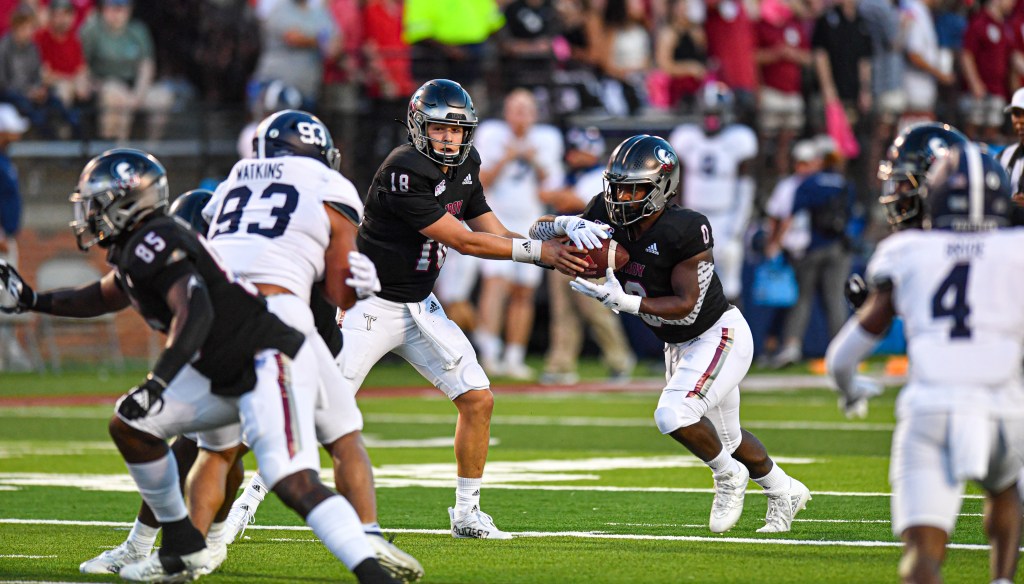 Brooks Bruce nailed a 34-yard field goal to give the Troy Trojans a 27-24 win over Georgia Southern on Saturday night at Veterans Memorial Stadium.

The Trojans pick up their first Sun Belt Conference win of the season and pull even at 1-1 in conference play. They are 3-3 overall.

“I really like the way the guys kept fighting,” head coach Chip Lindsey said. “It says a lot about our team. When things were bad, we fought through adversity in the third and fourth quarter; They kept fighting.”

leading by 21, the Trojans allowed the Eagles to score 21 unanswered points in the second half. Tied at 24 with 1:46 remaining in the fourth, TJ Harris picked off an Eagle pass, giving the Trojans possession inside Eagle territory. The Trojans got the ball inside the Eagle 10 before having to settle for a 24-yard field goal by Brooks Buce, giving Troy a three-point lead with 1:46 remaining.

The Eagles started their drive on their own 31 with 1:38 left and no timeouts. On a third and eight, Elijah Culp tipped a pass into the waiting arms of Javon Solomon ending the game.

The Trojans made a switch at quarterback before the game, choosing to start Gunnar Watson over Taylor Powell.

“I thought he performed well,” Lindsey said. “Taylor obviously was banged up. I thought it would be nice to give us a shot in the arm. With Taylor not being 100 percent, it made that decision kind of easy. Really proud of Gunnar. He is a guy who is special.”

Watson finished the game completing 24-of-36 passes for 270 yards and had two touchdowns.

After putting up 286 yards in the opening half, the Trojan offense was held to 123 yards in the third and fourth quarters.

“Offensively, I thought we did a much better job early on running the football and protecting,” Lindsey said. “We scored some points and I really thought we were in a groove and then in the second half, the wheels kind of came off on us.”

The Eagles entered the game averaging 280 yards per game. On Saturday, the Trojans held them to 82.

Watson started his day 4-4 and the Trojans jumped out to early lead when Brooks Bruce converted a 29-yard field goal, giving Troy a 3-0 lead.

Watson finished the quarter with 12 completions in 16 attempts. He found the endzone for the first time this season when he connected with Jabre Barber for a 15-yard score, bringing to the score to 10-0.

Jamontez Woods, in the second quarter, took a Watson handoff 34 yards for a score and the Trojans led 17-3 heading into halftime.

The Trojans outgained the Eagles in the opening half 286-83.

Watson and the Trojans took their opening possession of the second half 62 yards on four plays, ending with a 26-yard touchdown reception by Reggie Todd. Kimani Vidal had a rush of 31 yards to set the Trojans up inside the Eagle 30-yard line.

Georgia answered Troy’s touchdown with a six play, 75-yard drive and scored on a Logan Wright touchdown run. After a successful two-point conversion attempt, Troy’s lead was cut to 13 at 24-11 with 7:46 remaining in the third.

Following a Troy fumble, the Eagles regained possession in Troy territory. Khaleb Hood raced out for a 23-yard touchdown run, cutting Troy’s lead to six with 6:45 left in the third.

The game entered the fourth quarter with the Trojans holding on to their 6-point lead.

The Trojan offense was held to 85 yards in the third quarter.

The Eagles began the fourth quarter with a 42-yard field goal by Alex Raynor, bringing the score to 24-21.

Troy had an opportunity to get off the field midway through the fourth quarter with the lead in hand. While attempting to go for it on fourth and one, the Eagles were called for an illegal snap, backing them out of field goal range, forcing them to punt. Before being able to punt the ball away, Troy’s Charles Strong was called for defensive delay of game for clapping at the line of scrimmage. The Eagles elected to go for it and picked up the necessary yards. By the end of the drive, the Eagles tied the score with a 38-yard field goal by Raynor with 5:52 remaining.

Todd finished with four catches for 71 yards to go along with one touchdown. Tez Johnson had six catches for 38 yards.

The Trojans will hit the road next week to take on Texas State beginning at 2 p.m.