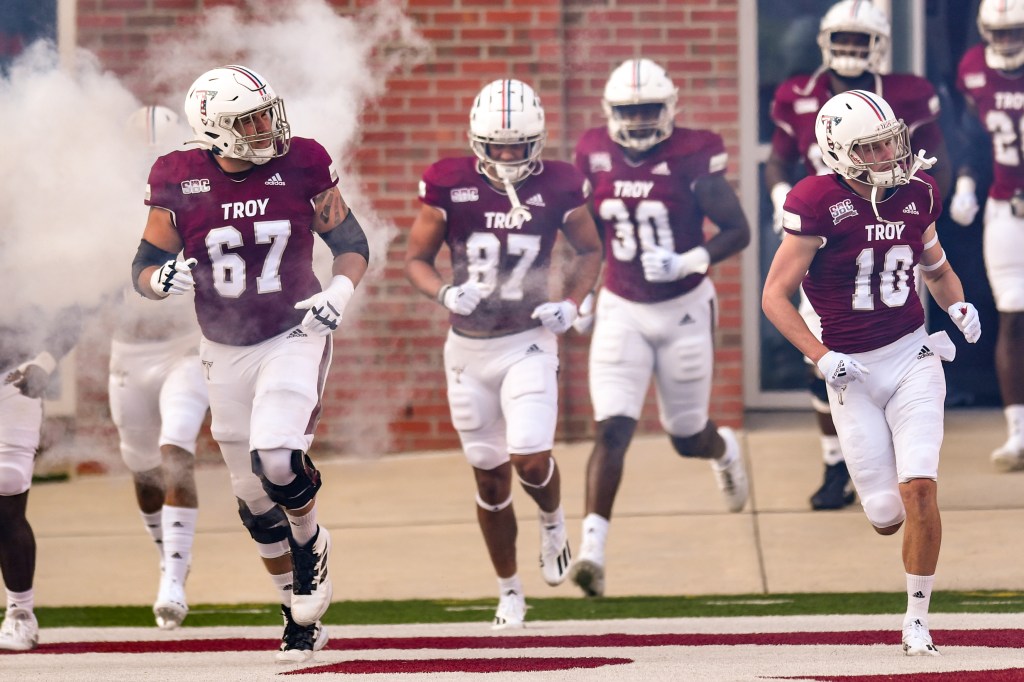 Contributed photo/Troy Athletics | The Messenger The Trojans run onto the field prior to their game against Liberty earlier this season.

The Troy Trojans aim to get back into the win column when they return home on Saturday night to take on Georgia Southern at Veterans Memorial Stadium.

The Trojans dropped their second consecutive game last Saturday when they fell to SEC foe South Carolina. With the loss, the Trojans drop to 2-3 on the season. They head into their conference matchup with Georgia Southern 0-1 in conference play.

“It’s exciting for us to get the chance of getting back to the Vet,” head coach Chip Lindsey said. “I think it’s going to be huge challenge for us. We’re back in conference, which is good. We are excited about that. Georgia Southern brings things to the table that can give you problems.”

The Trojan defense enters this week as the top ranked defense in the Sun Belt Conference when it comes to total defense. They allow 267 yards per game. Their run defense is second to only South Alabama. Troy allows 99 rushing yards per game entering Saturday. The defense will be tested this week then the take on the option-heavy Georgia Southern offense, which comes in averaging 280 yards on the ground.

“We have to play good, disciplined football on defense this week,” Lindsey said. “They are gong to run the football and we have to make sure we tackle. Have to have someone on dive, quarterback and pitch. They have added a few elements to their offense that will make them even tougher to defend.”

“I think they’re ranked fourth in the nation in rushing, which gets our blood pumping,” linebacker KJ Robertson said. “It makes us really have to work on being physical and tackling right. They have really good and really big backs. They are smart and they’re aggressive. I think everybody is very excited for this type of matchup.”

“I thought our offensive line played their best game as far as the run game goes,” Lindsey said. “Physical up front and it’s something we hope to build on as we move forward.”

Despite taking a step in the right direction in the run game, the offense is still in search of big plays. The Trojans were held to 20 points or less for the third time this season last Saturday.

“We need some explosive plays to show up,” Lindsey said. “We are still struggling to find that right mix of consistency. I think once we do that we will have the opportunity to score more points.”

The Eagles enter the contest allowing 29 points per game and 489 yards, second worst in the conference ahead of only Arkansas State.

Nose tackle C.J. Wright caught the attention of Lindsey this week. Wright enters the game with 13 tackles, five tackles for loss and three and a half sacks.

“Very impressive,” Lindsey said. “He’s active and he plays extremely hard. He plays with good pad level and is explosive. He leads their team in sacks and tackles for loss. He is the leader of their defense the way I see it.”

This will be the 21st meeting between the two schools. The Trojans hold a 13-7 advantage of the Eagles and are 6-3 at home against Georgia Southern.

“Still looking to play our best game,” Lindsey said. “That is something we talk about a lot. We haven’t played our best, complete game yet, offensive defensive and special teams.”