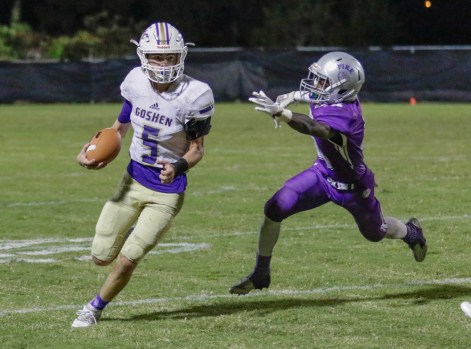 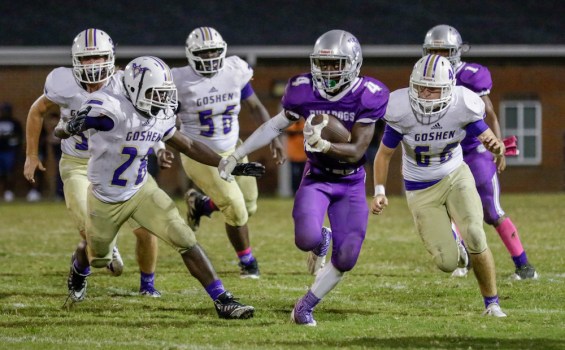 The Pike County Bulldogs and Goshen Eagles continued their rivalry on Friday night in Brundidge. A total of 28 points were scored, but in the end, it was the Eagles who picked up the 15-13 win, earning their first win under head coach Don Moore.

The Eagles improve to 1-7 with the win.

With the loss, the Bulldogs fall to 0-6.

Both teams scored two first half touchdowns. The difference of the first half was a missed extra point and a successful two-point conversion.

The Eagles answered with a 72-yard drive on their next possession. Tyler McLendon ended the drive when he hauled in a 50-yard touchdown pass from quarterback Peyton Stamey. After a successful extra point attempt the game was tied at 7 with 6:10 remaining in the opening quarter.

The Bulldogs responded with a lengthy drive of their own. Starting on their own 40, Thomas got the ball on six-straight plays, accumulating 57 yards. With the ball on the Eagle one, Jakelmon Glasco barreled his way in for a one-yard touchdown. After a missed extra point, the Bulldogs led 13-7 with 2:03 remaining in the opening quarter.

After both teams failed on their next possession, the Eagles gained the lead on a 26-yard run by Szemerick Andrews. The Eagles took the lead on a successful two-point conversion attempt by Andrew Galloway.

The Eagles went into halftime leading 15-13.

“We got inside the redzone a couple times, but we kind of sputtered,” Moore said. “We had a couple penalties that hurt us and kind of set us back a little bit. They responded to the challenge on defense really well and went after them.”

Andrews rushed for 148 yards on 19 carries and finished with a touchdown to lead the Eagle ground attack.

“I told him before the game to go be the ball player I know you are,” Moore said. “He took that as a challenge and went out and responded. He is a fantastic player, but an even better young man.”

Andrews finished with seven tackles, while Jacob Saupe led the way with eight.

Thomas led the Bulldogs offense with 159 yards on 18 carries.

The Eagles will be back in action next week when they host Beulah. The Bulldogs celebrate senior night against Childersburg.