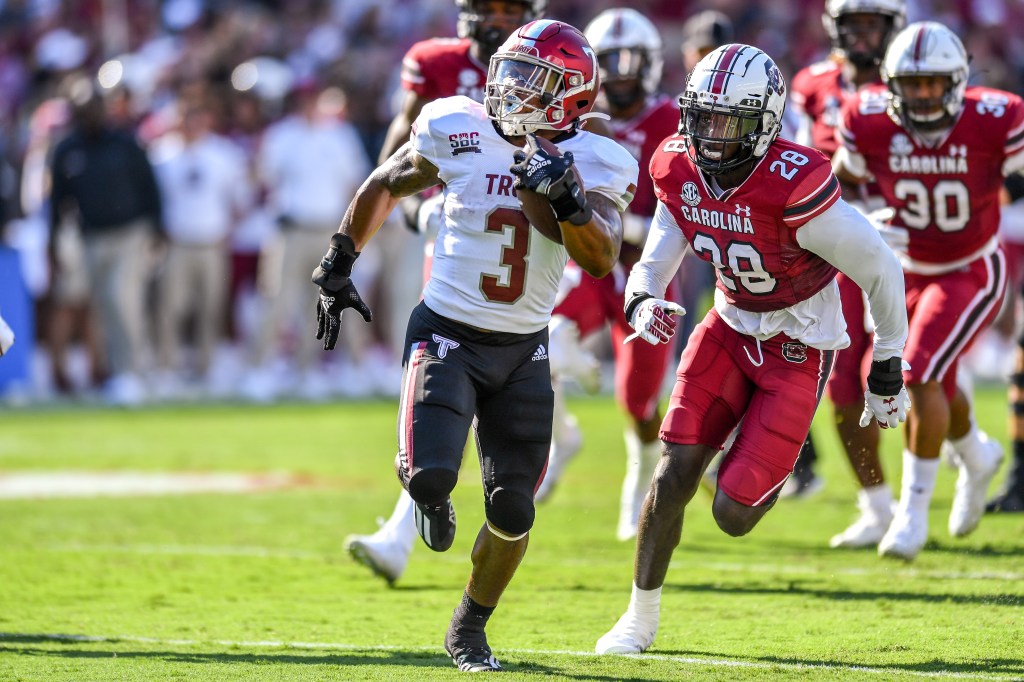 The Trojans led briefly on Saturday, but four costly turnovers were too much to overcome.

There was a total of seven turnovers in the game. The Gamecocks had three to go along with the Trojans’ four.

The Trojans fell behind on the first possession of the contest when Gamecocks’ kicker Parker White converted a 23-yard field goal.

After a quick three and out on their first possession of the game, Troy quarterback Taylor Powell and the Trojans gained the lead when B.J. Smith rumbled his way in for a 35-yard touchdown run.

The Gamecocks answered with 14-unanswered points to go up 10 heading into halftime. EJ Jenkins hauled in a 16-yard pass from quarterback Luke Doty, giving the Gamecocks a 10-7 lead with 4:07 remaining in the half.

The Trojans looked to end the half with some points when Powell and the Trojans marched inside the Gamecocks’ 25 yard-line. Powell had his pass intercepted and returned 74 yards for a touchdown, putting South Carolina up 17-7. Powell has had an interception returned for a touchdown in two straight games.

The Trojans wasted little time to cut into their deficit in the second half. They took their opening possession 75 yards in eight plays, ending with a one-yard touchdown run by Jamontez Woods, bringing the score to 17-14.

White converted on his second field goal to bring the score to 20-14 entering the fourth quarter.

The game took a bizarre swing on the opening play of the fourth quarter. Powell was sacked and had the ball stripped away. USC’s Damani Staley picked up the loose ball only to have it stripped away by Trojan running back B.J. Smith. Carolina’s Jahmar Brown scooped up the ball and raced towards the endzone. Brown celebrated a bit too early and dropped the ball before crossing the goal line, giving the Trojans possession after the ball went out of the back of the endzone.

The Trojans were forced to punt later in that drive, but got the football back with Richard Jibunor stripped the football away from Doty. On a third down play, Powell connected with Reggie Todd, but had the ball stripped away. The Gamecocks were awarded possession despite Troy’s Jabre Barber having both hands on the football along with USC’s Zacch Pickens.

The Gamecocks ended a lengthy drive with White’s third field goal, putting the game out of reach.

Powell completed 19-of-35 passes for 136 yards and had two interceptions. B.J. Smith finished with over 100 yards for the first time this season when he rushed for 105 yards on 19 carries. Tez Johnson caught five passes for 47 yards.

The Trojans will return home and get back to conference play next week when they host Georgia Southern beginning at 6 p.m.