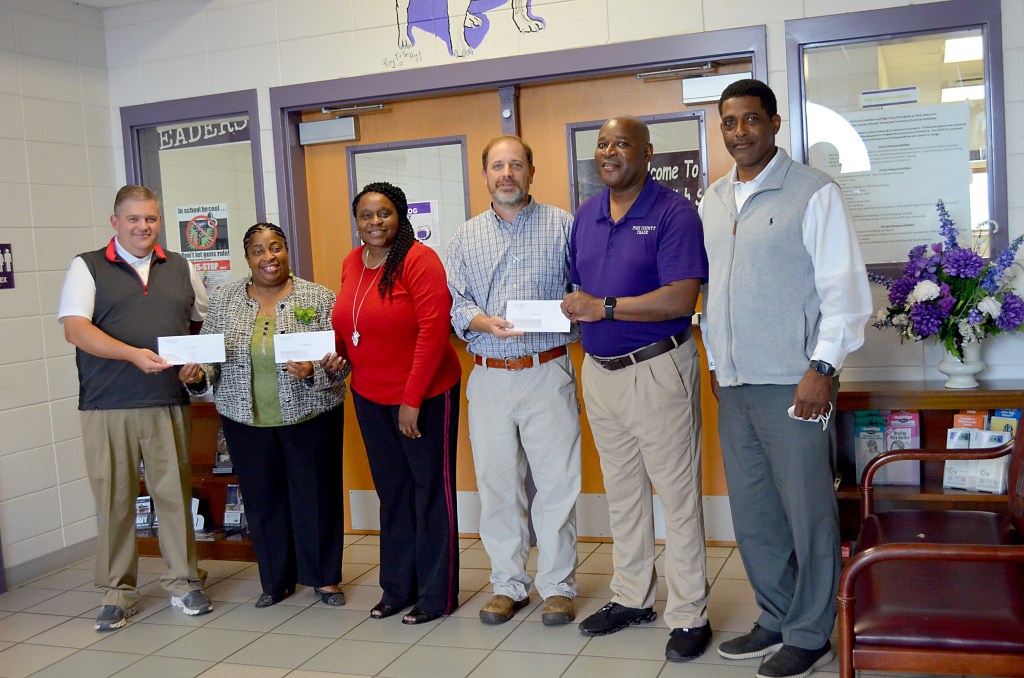 “We understood the schools could benefit from assistance with the funding of school programs and the Pike County Commissioners wanted to help fill those needs as best we could,” Pearson said. “Today, we have donations in the amount of $1,000 each for the Pike County High School Pride of Pike Marching Band and the track and girls’ basketball athletic programs.”

Pearson and Copeland said the Pike County Commission appreciates the opportunity to lend its support where there are needs within the schools.

In expressing his appreciation for the generous donation to the PCHS band program, Jonathan Chance, band director, said the contribution will be used in the purchase of new band uniforms.

“This donation will put us over the top with the money we need to pur-chase the new uniforms,” Chance said. “These will be the first new uni-forms our band has had since 1992. We are staying the traditional style uniforms and are looking forward to what they will mean to our band now and in the future.”

Calvin Morris, PCHS track coach, said the commission’s contributions will go toward the purchase of uniforms and also for expenses associated with track meets.

“That’s usually around $200 for each meet and we participate in about 10 meets a year,” Morris said. “We are looking forward to a successful season with the possibility of a girls’ gold medal.”

For Coach Melissa, White and the girls’ basketball team, the Commission’s financial support will allow for the purchase of new equipment and additional supplies throughout the basketball season.

“The support of the Pike County Commission means a lot, and not only from a financial standpoint,” White said. “We are starting tryouts and look forward to a successful season.”

Commissioners Pearson and Copeland also visited Pike County Elementary School and presented “much needed and greatly appreciated” contributions to Principal Rodney Drish, who said the contribution of $1,500-plus will go a long way in the continuation of the campus beatification project.

“We are proud of what has been accomplished with the support of our students, faculty and staff, parents and community members,” Drish said. “We want our campus to be inviting, and, for it to be so, we have to instill pride in our school.”

And, Drish asked, “Do you see any trash on our campus? So, it’s working.”

However, the campus beautification project is on-going and Drish already has an idea as to how the Pike County Commission’s contribution will be used. In fact, Drish has several ideas and, if the response to his ideas follows suit, the Pike County Elementary School family will be “all in” with his ideas.