Notebook: Trojans moving on after loss 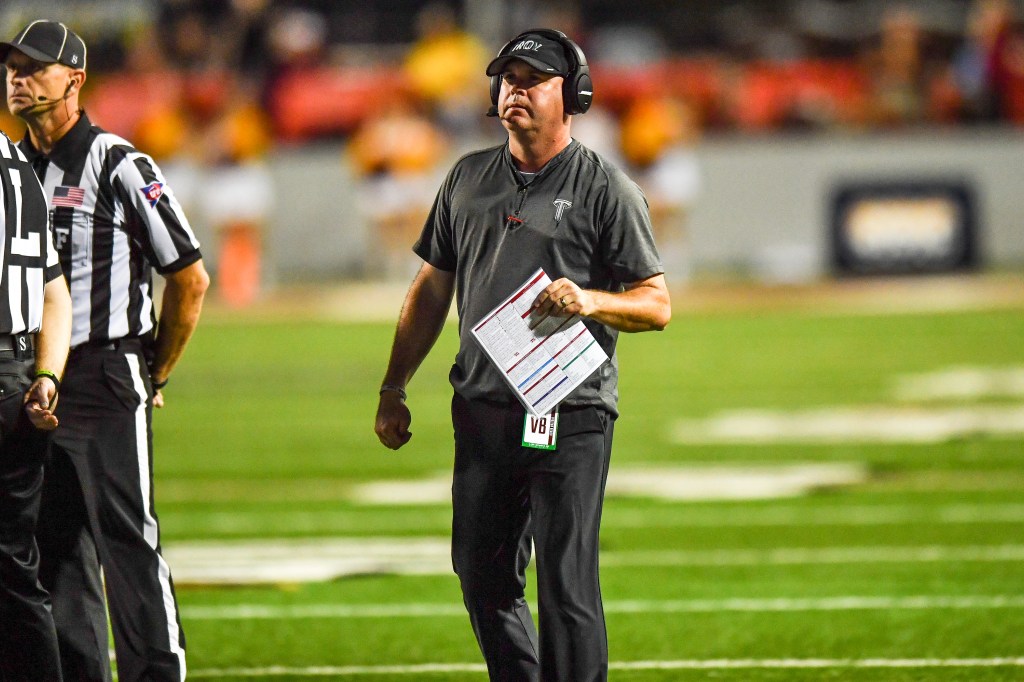 The Troy Trojans fell to 2-2 on Saturday when they fell in their conference opener against Louisiana Monroe, 29-16. The loss for the Trojans is their first against Monroe since the 2014 season.

On Tuesday, Lindsey reflected on Troy’s loss and also looked ahead to their challenge against SEC foe South Carolina on Saturday.

“The biggest thing I took from that game was the penalties,” Lindsey said. “Very uncharacteristic for us.

“Penalties are a disciplinary issue. I take responsibility for that. It’s something we really have to emphasize this week. Get back to playing sound, disciplined football. I think it’s something that really hurt us last week.”

Offensive searching for more explosive plays: The Trojans outgained the Warhawks 356-297 on Saturday. Despite outgaining the Warhawks, the Trojans felt they were lacking when it came to executing big plays. Troy had nine plays go for at least 15 yards and four plays of 20 yards or more.

“Offensively we are a work in progress,” Lindsey said. “We have to figure it out and score points, create explosive plays and eliminate the penalties. That is something we are working on as we speak.”

ULM capitalizes on big plays: While the Trojans were searching for big plays, ULM found theirs on scoring plays. The Warhawks had scoring plays of 23 yards, 40 yards and 96 yards on an interception return for a touchdown. The Warhawks also forced a safety.

“We have guys in the right place and heading in the right direction, we just have to execute the call on those two touchdowns,” Lindsey said.

“At the end of the day we have to do a better job executing,” Lindsey said, “That is something that has hurt us the last couple weeks. Executing, finishing blocks and this week we added penalties.”

Getting back to work: The Trojans returned to Troy at approximately 6 a.m. on Sunday morning and met again as a team later that night to recover and watch film. After watching film they put their performance against ULM behind them and started focusing on South Carolina.

“Our guys are really resilient,” Lindsey said. “At the end of the day we are 2-2 and we have eight games left. We don’t have time to sit around and feel sorry for ourselves with where we are. We are what we are and we didn’t play well enough. I think our players understand that; We have a mature team. We will practice this afternoon (Tuesday) and i’ll be shocked if we don’t respond really well.”

Leaning on senior leadership: Although Lindsey takes responsibility for getting the team ready go on Saturdays, he also leans on the teams senior leaders, guys like Dylan Bradshaw, B.J. Smith and Carlton Martial. Lindsey expects those guys to lead the way this week in practice.

“When you have veterans like Dylan, B.J. and Carlton you lean on those guys to show their leadership in these situations,” Lindsey said. “Been very impressed with how they went about their business the last couple of days. They are disappointed and team is disappointed with our performance and how we played.

“We have to get our guys ready to go this week. We have moved on and look forward to the opportunity this weekend.”

Looking ahead: The Trojans close out their current string of road games against a 2-2 South Carolina team coming off a 16-10 loss to Kentucky. It will be the fourth meeting between the Trojans and Gamecocks. The Trojans are 0-3 against South Carolina. They fell to USC in 2010 69-24.

“We have our hands full, but at the same time it’s an exciting challenge for us,” Lindsey said. “Something we look forward to here in Troy is getting to play these Power 5 or SEC schools. We will have to play very well to have the opportunity to win.

“It’s going to be a challenge for us. We need to be physical and if we do that and get going offensively a little bit then I think we will have a great opportunity.”