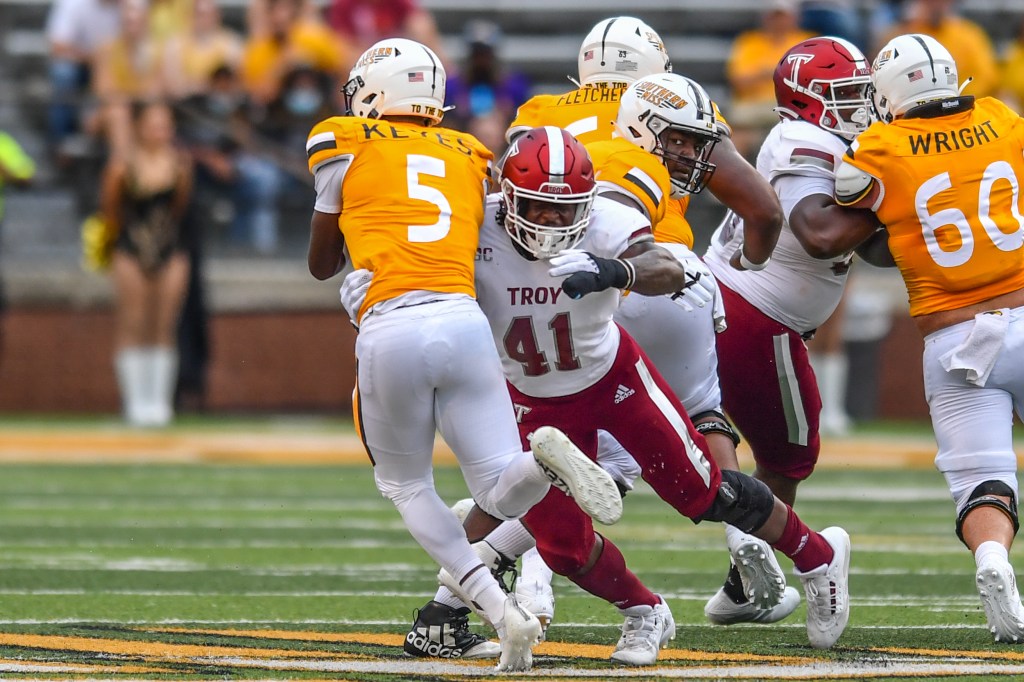 The Troy Trojans kickoff off Sun Belt Conference play on Saturday when they travel to take on the Louisiana-Monroe Warhawks.

The Trojans picked up their second win of the young season last Saturday night against Southern Miss. They hope to get conference play started on a high note with a win over the Warhawks.

“First conference game on the road,” head coach Chip Lindsey said. “They are going to be sound all the way around. They have a good coaching staff and their players play extremely hard.

“This is another challenge on the road, especially it being in conference. Anytime you play a conference opponent in our league you have to be ready to go.”

The Warhawks come into the game with a 1-1 record after falling to Kentucky and beating Jackson State last week. ULM’s win over Jackson State snapped a 12-game losing streak.

“Jut watching them it looks like they are playing sound football,” Lindsey said. “They played Kentucky and then turn around and played Jackson State. I thought in both games they competed extremely hard. Coach Bowden, obviously has a lot of experience, and you can see his fingerprints all over this team.”
The Troy defense has led the way thus far this season, the defense has held opponents’ offense to 27 total points this season, the fewest in three games since 1997.

“We’ve come a long way on defense the last couple of years,” Lindsey said. “Brandon Hall and his staff have done a great job of getting our guys into position, but at the end of the day, its about players making plays. We’re doing a good job of contesting throws down the field; up front is causing some disruptions to the quarterback and it’s hard to play the position when you’re running for your life.”

This week challenge for the defense will be slowing down an offense led by one the most well-known offensive minds in the country in offensive coordinator Rich Rodriguez.

“An experienced guy who back in the day invented the spread offense in some extent,” Lindsey said. “Offensively, does a good job presenting a lot of problems. I think he does a great job building his offense around his personnel.”

The Trojans will be keeping an extra eye on receiver Boogie Knight. The junior has 12 catches for 136 yards in the first two games this season.

“He does a great job,” Lindsey said. “He is there number one receiving threat. He makes plays with the ball in his hands. We have to know where he is. He is the guy they are going to get the ball to.”

After being shutout in the opening half last week, the Troy offense scored 21 second half points. Quarterback Taylor Powell completed 27-of-39 passes for 255 yards and had one touchdown.

The Warhawk defense has allowed a total of 52 points in the first two games. forty-five of them came in their loss to Kentucky in week one. They allowed just seven points last week.

“Their defensive coordinator (Zac Alley) is one of the brightest young guys in the country,” Lindsey said. “He does a lot of different things and presents you a lot of issues. He is going to pressure you some, but he is very sound in what he is doing.”

Defensive end Ty Shelby has a total of seven tackles in the first two games and has four sacks.

“They have a really impressive defensive end in Ty Shelby,” Lindsey said. “Their whole front plays extremely hard and is very active. He leads them in tackles for loss and in sacks. Very active and plays extremely hard. He is aa guy we definitely need to have a plan for.”

This will be the first meeting between the two schools since 2018. The Warhawks had to cancel both meetings last season. The Trojans have won the last two meetings with the Warhawks and lead the series 10-7-1.