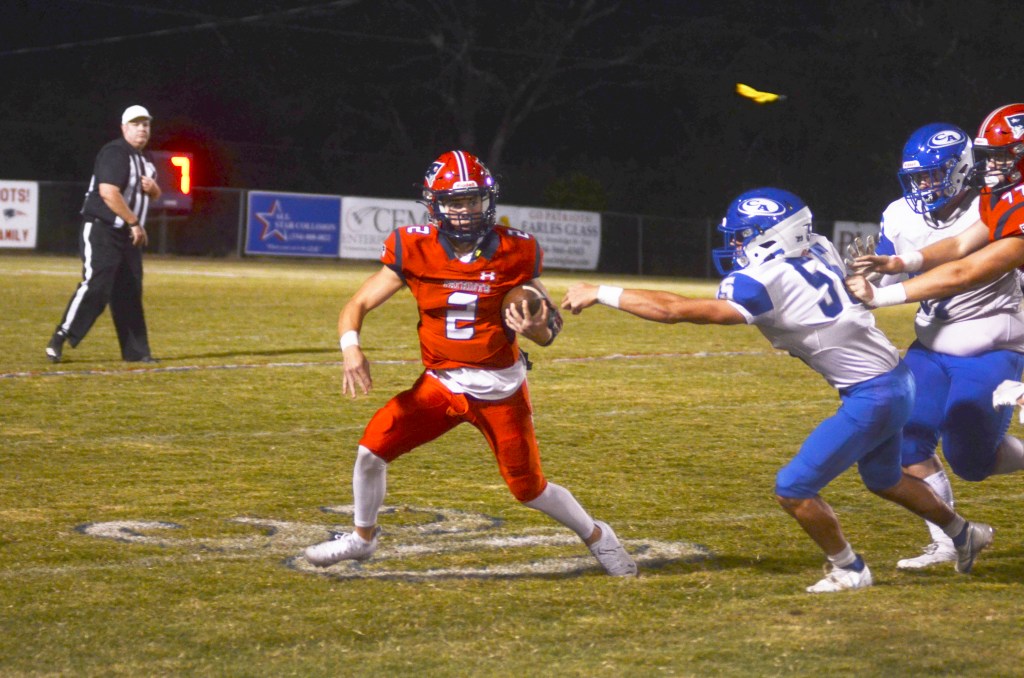 The Pike Liberal Arts Patriots led throughout the entire game Friday night, but had to hold on late in a 21-18 win over Chambers Academy.

The win for the Patriots gives them their fifth-straight win. The Rebels drop to 5-1.

The Rebels had possession trailing by three with just under 3:00 remaining in the contest. The Patriot defense forced a late sack putting the Rebels way behind the sticks for third and fourth down. Two-straight incomplete passes ended the Rebels hope of a comeback.

There were plenty of fireworks and flags in the opening half of play. A total of 20 points were scored in the opening 24 minutes on Friday night with the Patriots holding a 14-6 lead, despite having 75 yards worth of penalties.

The Patriots wasted little time to get on the scoreboard. Zakevin Pennington took a handoff on the third play of the game 48 yards for the opening touchdown of the game.

The Rebels answered immediately on their first drive. After starting on their own 39, The Rebels embarked on a 15-play drive ending with a 26-yard field goal by junior Caden Hayley. It was one of two successful field goals in the half by Hayley.

The Patriots started their next drive on their 31. Penalties forced them all the way back inside their own one yard-line.

Two drives later the quick-strike Patriot offense struck again when Ian Foster hauled in a 95-yard pass from quarterback Cason Eubanks. The Patriots increased their lead to 11 at 14-3 with 8:34 remaining in the half.

Both defenses kept both offenses off the scoreboard until the final drive of the half. After gaining possession on the Patriot 38, the Rebels marched inside the Patriots 10 yard-line before eventually settling for a 24-yard field goal by Hayley, bringing the score 14-6 at halftime.

Unlike in the first half, the Rebels got on the board first in the second half, but it wasn’t until the 2:52 mark of the third quarter when Tyrun Trammell raced for a 32-yard score, bringing the score to 14-12.

After taking over on their own 33, three plays into the fourth quarter, Foster hauled in a 71-yard touchdown pass from Eubanks and the Patriots led 21-12 with 11:21 remaining in the game.

The Rebels got to within three two possessions later when Jeremy Conway caught a pass and ran it in for a 29-yard touchdown with 5:05 remaining.

The Patriots will remain home next week to take on Tuscaloosa Academy and the Rebels will have a bye before taking on Edgewood Academy on Oct. 8.