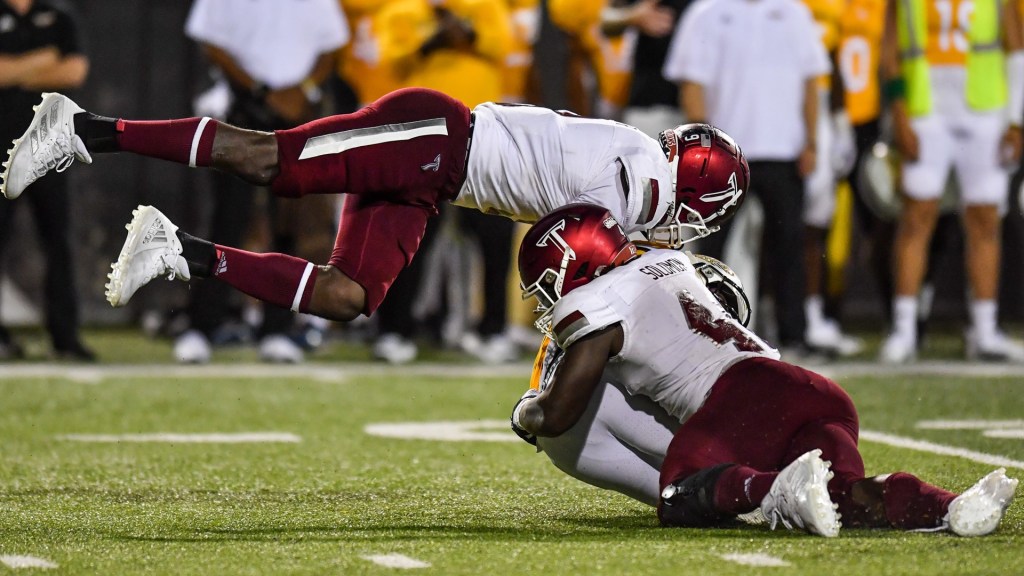 The Troy Trojans picked up their second win of the season and their first road win when they knocked off Southern Miss 21-9 on Saturday night in Hattiesburg.

It was Troy’s second straight win over the Eagles in Hattiesburg and third win over all against USM.

“It was a big win for us on the road,” head coach Chip Lindsey said. “Really proud with how our guys battled. Handling the road trip for the first time against a quality opponent on the road was a big challenge for us. I liked the way we approached it. We had a good week of practice and it carried it over into Saturday.”

Defense leads the way: The defense carried the team for the majority of the contest on Saturday night. They held The Golden Eagles to just 156 yards off offense, the fewest against an FBS opponent since the Trojans held Arkansas to 125 yards in 2002.

“I thought we played excellent,” Lindsey said. “I thought our guys really got after their quarterback and created a lot of big negative plays, which I thought were really big.”

“It means a lot to me,” Soloman said. “God blessed me with a great game. It shows my passion for the game. I worked hard and my team worked hard for what we are trying to achieve. It wasn’t a shock to us. We knew what we could do and we knew that’s how we were going to do it. It was exciting for me.”

Defense continuing to show its depth: Soloman is Troy’s second player to be named defensive player of the week, joining Zion Williams, who won it after Troy’s game against Southern. Will Choloh was named to the PFF National Team of the Week. The Trojans have had three different players lead the team in tackles over the first three games and have had two different players log at least two sacks in a game in Soloman and Choloh.

“It’s great to see because you see different guys doing it in practice,” Soloman said. “If all 11 guys could win the award, I guarantee you, Saturday night, all 11 guys would have won the award. We were doing our part from the front to the back and in the middle.

“I wish everybody could win the award because we all deserve it.”

“Jabre is now playing with more confidence,” Lindsey said. “He is continuing to learn and become a more polished receiver. He showed the other night that he as the ability to make other guys miss and make big time plays.

“It’s a big deal for him to step up and become one of the guys we can count on.”

Whittemore has 12 catches for 180 yards in the first three games this season, already more than he had all of last season when he had seven catches for 75 yards in 11 games.

“Luke is just dependable,” Lindsey said. “He is very solid. He is going to be in the right place at the right time. He is going to convert the route when he’s supposed to. He is a smart football player with great hands and great ball skills.

“Quarterback has to have confidence your going to be where your supposed to be and when you have the opportunity you have to make the play. He has done a really nice job of that so far.”

Running game still trying to find its footing: After struggling in their loss to Liberty, the Trojans hoped  their run game would rebound against the Golden Eagles on Saturday. The Trojans rushed for 79 yards as a team, not including yards lost during sacks. Kimani Vidal finished with 45 yards on 17 carries and had a touchdown.

“Definitely not where we want it to be,” Lindsey said. “Something we are focusing on everyday is trying to get better at running the football. We have good backs and we have good offensive lineman up front, but we have to play better all the way around. We have to run better and block better.”

Looking ahead: The Trojans will travel for the second week in a row when they open up Sun Belt Conference play on Saturday against Louisiana Monroe. The game can be seen on ESPN+. Kickoff is set for 7 p.m.