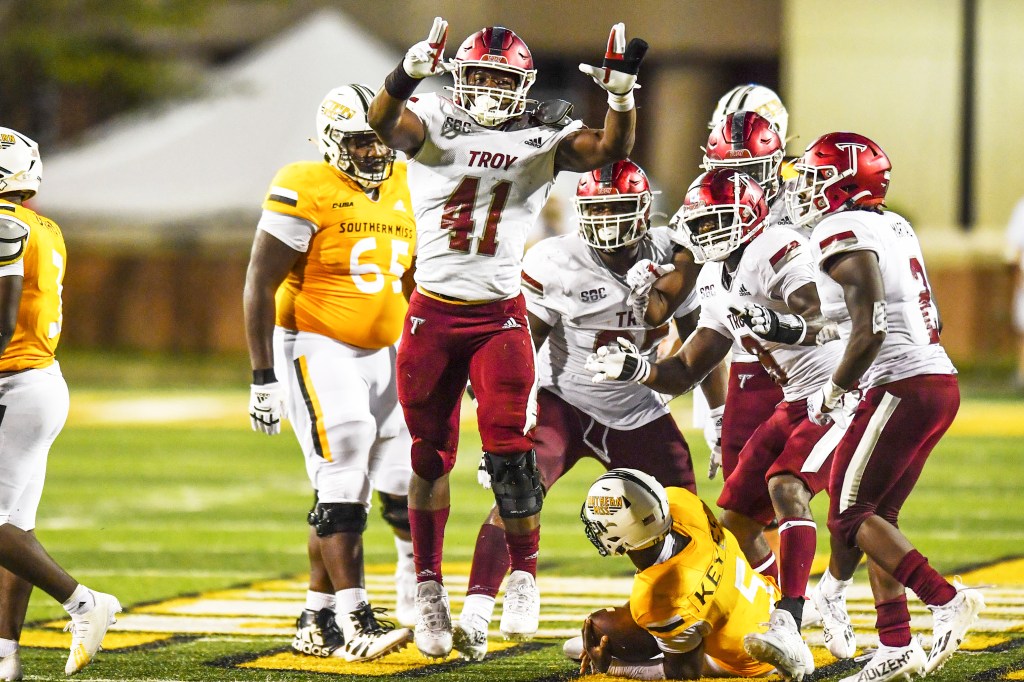 Contributed photo/Troy Athletics| The Messenger Troy defensive end Javon Soloman celebrates after one of his 3.5 sacks on Saturday evening against Southern Miss.

The Trojans overcame a sloppy start with a strong defensive performance in 21-9 win over Southern Miss on Saturday even in Hattiesburg.

The win for the Trojans improves their record on the season to 2-1.

The Trojans were on the wrong side of a 3-0 score entering halftime. The offense finished the first half with a total of 78 yards. They had a total of five punts to go along with a failed fourth down attempt and a lost fumble.

“We didn’t make any adjustments; we just played better,” head coach Chip Lindsey said about his offense. “We were like, ‘We’ve got to do something. We can’t just keep sitting here getting your butt stopped.’ I think they got real motivated.”

The motivated Trojans answered their head coach’s call with a 21 unanswered points in the second half.

The lopsided second half was mainly due to the strong play of the Troy defense. For the second week in a row, it was the Troy defense that looked like the better unit. The Trojans held the Eagles to 156 total yards and just 57 yards in the second half. They held Frank Gore, Jr. to 31 total yards on 15 carries. Thanks to nine defensive sacks, the Eagles ran for a total of -1 yards.

The Trojan front seven was a handful for the Golden Eagles on Saturday. Bandit Richard Jibunor and defensive end Javon Soloman combined for six sacks, 16 total tackles and seven and a half tackles for loss. Jibunor also had an interception.

“Javon played great,” Troy head coach Chip Lindsey said after the game. “I thought he and Richard, they got after the quarterback. They were in the backfield all night.”

Soloman’s 3.5 sacks are second most in the country this season, and the most by a player against an FBS opponent. It was also the 10th most in Sun Belt Conference history and second most in Troy history.

“It all starts with practice, I kid you not,” Solomon said after the game. “We were dominating in practice and it correlates to the game. We had so much fun flying around out there. The intensity was just rising and rising. After last week they needed us to do better and that’s what we went out there and did.”

Through three games this season, the Trojan defense has allowed a total of 27 points, fewest since 1997.

Troy’s offense finished with over 300 yards at 304. Quarterback Taylor Powell threw for 255 yards while completing 27-of-his 39 passes. He finished with two touchdowns and an interception.

Receiver Tez Johnson finished with 10 catches for 106 yards and Luke Whittemore hauled in six catches for 58 yards. Jabre Barber had a receiving touchdown to go along with four total catches for 46 yards.

Kimani Vidal rushed for 45 yards on 17 carries and had one touchdown.

The Trojans kickoff SBC play next Saturday when they travel to Monroe to take on the Louisiana-Monroe Warhawks. Kickoff is scheduled for 7 p.m.