Patriot defense ready for next challenge 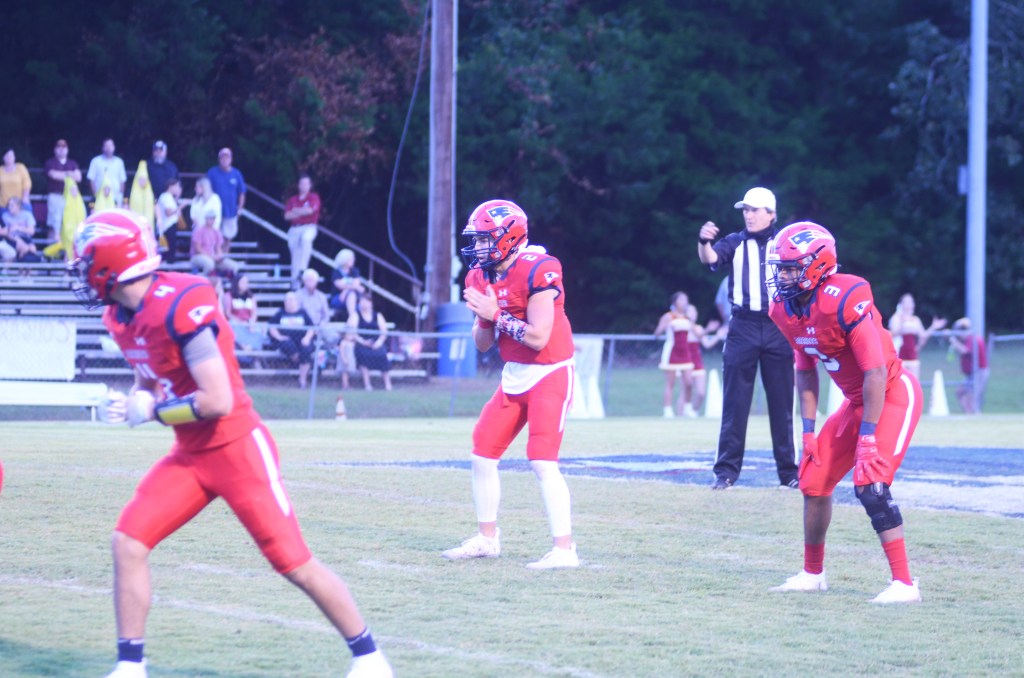 Mike Hensley| The Messenger Cason Eubanks (quarterback) and Zakevin Pennington line up before a play against Escambia Academy.

The Pike Liberal Arts Patriots look to win their third game in a row when they travel to Elmore to take on the Edgewood Academy Wildcats on Friday night.

“After the Escambia game we really had to evaluate ourselves as coaches,” head coach Mario White said. “I have outstanding players on my team with great character and leadership. I had to evaluate how I was coaching and make sure we got back on track. Each week has been a playoff game for us. We hit the ground running and we grind and work.

“They have really played some inspired football the last couple weeks and I’m proud of them.”

The Patriots have shut out their last two opponents, while their offense has put up a total of 91 points.

“It starts in the box,” White said. “Coach (Robin) Snyder is in the box and he relays what he sees to coach Griffin, coach Schofield and coach Mike. Those guys have put together a brilliant plan. The kids believe in everything they say or do.

One player that stuck out in last week’s win was defensive end Frankie Jefcoat. The defensive end logged 11 tackles, one sack, three hurries, three tackles for loss and a fumble recovery.

“We challenged Frankie,” White said. “I told him the guy last year in the last four games was a man amongst boys, you could not block him. We gave him a comparison, the last four games of last season and the last two games of this season. Although he has played great, it wasn’t at the level of the last four games (last year). The look in his eyes and the intensity he had all last week, we knew he was going to have a special game. When you have 11 tackles, one and half sacks, three tackles for a loss and recovered fumble, that’s a heck of a game out of a defensive end.”

The Patriots shift their focus to this week’s game against the Wildcats. Edgewood Academy is coming off a 35-19 loss at home against Macon-East. The loss broke up an undefeated start to their season. Edgewood comes in at 3-1.

“Coach (Chad) Michael and those guys are very fundamentally sound,” White said. “They run great routes and they are pretty good up front on offense. They are very proficient at what they do. They have a great quick game, they have a great intermediate game and they will take shots on you. We have to have our eyes in the right spot and we have to focus and be physical and come down hill.”
The two teams were scheduled to play last season, but the game was called due to