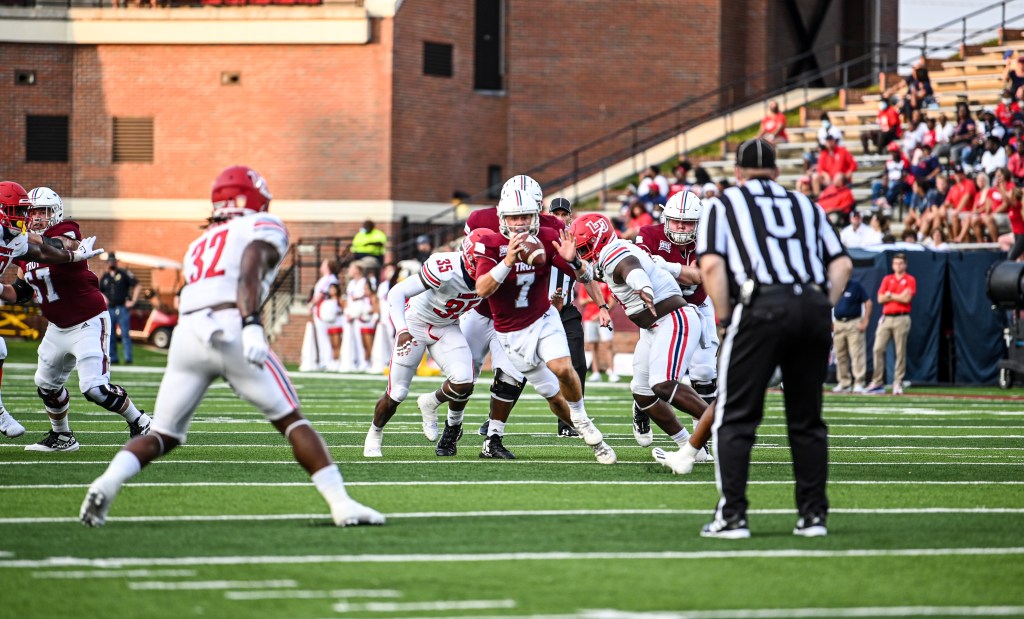 The Trojans fell to Liberty 21-13 on Saturday, giving them their first loss of the season.

The Trojans look to rebound in their first road game of the season against Southern Miss.

Defense puts together another strong performance: The Troy defense knew they had a daunting task in front of them when Malik Willis and the Liberty Flames offense arrived in Troy. The Trojan defense held the Flames off the scoreboard for much of the second quarter and for all of the third quarter. The Flames finished with 339 total yards, 154 through the air and 185 on the ground.

“Really thought our defense played well for the most part,” Lindsey said. “Few things early, but we adjusted well. Malik Willis, we probably held him check as well as we possibly could. He made some big time conversions on third and fourth down with his legs. We knew he would make some plays, but I really liked how we adjusted and we gave ourselves an opportunity.”

“The other side had a lot to do with it,” head coach Chip Lindsey said. “We lost some one-on-one battles and we didn’t maintain our blocks all the time, which is needed when you play good teams. We miss  identified some things in the run game. We have to do much better up front in getting all five guys on the same page every snap.”

Lindsey said the Trojans finished with six explosive plays during Saturday’s loss all of them came in the passing game.”

Looking ahead to Southern Miss: The Golden Eagles picked up their first win of the season last weekend when they knocked off Grambling 37-0. They fell to South Alabama in week one, 31-7.

This will be the 11th meeting between the Trojans and the Golden Eagles. Southern Miss leads the series 8-2. USM defeated the Trojans 47-42 in 2019.

“Storied program and a really good football team,” Lindsey said. “It’s a big challenge for us anytime you go on the road. This is a fun game to play because it’s two quality programs that have played in the past. Good games and a good rivalry. Another out of conference challenge for us, one we can use as we get into conference play to see where we are and to get us ready for a good conference schedule.”

“They always have a good crowd and it will be loud,” Lindsey said. “It’s been two years since we played in front of a big crowd on the road. This will be something we have to be prepared for, from a noise standpoint, especially on third down. I know that place can get loud, definitely a challenge for us handling the noise. We will get a good plan together later in the week.

“I love the crowd, especially at the Vet.,” Choloh said. “The Troy fans, the Troy student section, there’s nothing like it. It’s electric every time you step out there. With that said, it’s a different animal on the road. I personally love going on the road. There is nothing like silencing the home team’s crowd. We hope to do that this weekend.”