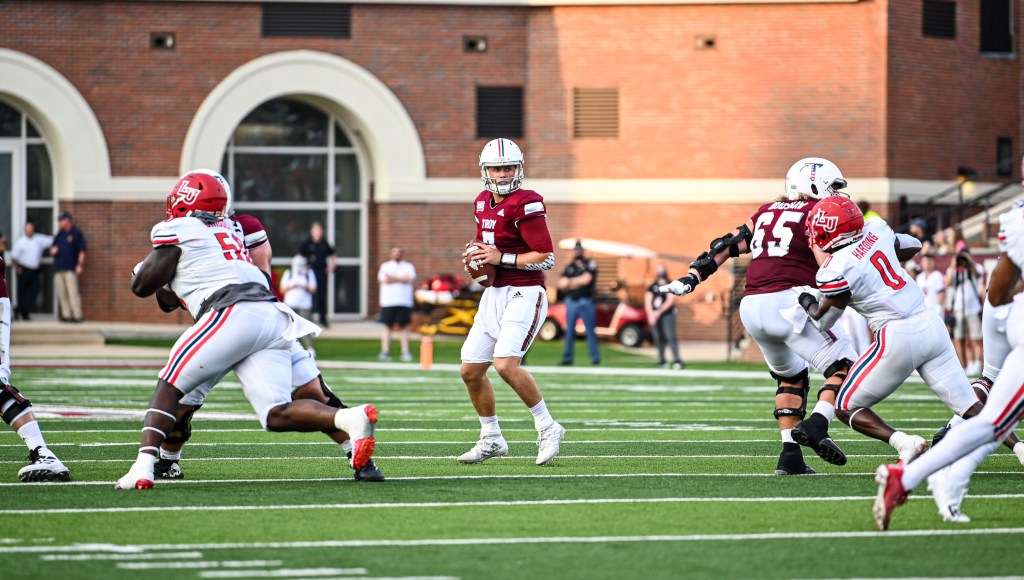 The Troy Trojans look to start 2-0 on the year when the Liberty Flames pay a visit to Veterans Memorial Stadium on Saturday evening.

The Trojans defeated Southern 55-3 last Saturday and now look to start 2-0 on the season for the first time since the 2005 season. They will have to do it against a Liberty team coming off a 10-1 2020 season and a 48-7 win over Campbell last week.

“This is really talented football team coming in,” Lindsey said. “We have a challenge in all three phases. That’s what these non conference games are for…lay it all out there and enjoy the opportunity to play in these big games. That’s what we are talking about with our team this week.”

The Trojans defense held the Southern Jaguars to three points on just 189 total yards. It was the fewest yards allowed since 2019. It was just the fifth time the Trojan defense held an opponent to under 200 yards since 2016. The defense also forced four turnovers in the win, all interceptions including two by Zion Williams.

“I think they played extremely hard,” Troy defensive coordinator Brian Hall said. “The turnovers obviously adds to the confidence level. Those guys feel like what we are doing is working. Anytime you are trying to build a defensive culture, anytime you go out and have turnovers and create points is something they can hang their hats on. The more success they have the more continuity they will build and ultimately build the kind of culture we are looking for.”

This week the defense will get their first test of the season when one the best quarterbacks in the country in Malik Willis pays a visit to Troy.

Willis enters the season on numerous preseason watch lists including the Maxwell Award and the Walter Camp Player of the Year Award. Willis totaled 272 yards of total offense and two touchdowns in Liberty’s win over Campbell last week.

“On offense I think it obviously starts with their quarterback Malik Willis,” Lindsey said. “Very talented player, one of the best in the country. Projected as maybe a first round pick in the NFL. Malik is an awesome kid; I have known him from some previous stops. Very talented, athletic, big time arm and can make every throw. Looks like he has improved tremendously over the last couple of years. We have to limit his explosive plays as much as we can.

“They are going to present a lot of issues. We have to have a very good plan and execute it and slow them down some.”

The Trojan offense finished with 454 yards off offense in their win last Saturday. Taylor Powell and Gunnar Watson combined for 292 passing yards, while the run game totaled 162 yards led by Kimani Vidal’s 81 yards and a touchdown.

“Offensively I thought we controlled the game pretty well,” Lindsey said. “We had one turnover in the redzone, it’s something we don’t’ want to do ever, but I thought Taylor and Gunnar both made good decisions at quarterback. I thought they were very efficient.

“I thought the running backs ran the ball extremely well. They protected the ball and caught the ball out of the backfield.”

“They have several good players,” Lindsey said. “Their defensive end Durrell Jonson, to me, shows up over and over. He is Explosive, a Senior Bowl Watch List guy. I think he was top 30 in the country in sacks last year. Really can get after the quarterback, but can really play the run well. He is violent with his hands…He is a huge concern on the defensive side. We have to do a great job at knowing where he is. Talented defense who runs to the ball and is fast, in a lot of ways similar to ours. Maybe a little bigger in some areas, but very similar defensively.”

This will be the fourth meeting between the two schools. Liberty holds a 2-1 advantage in the brief series. Liberty defeated Troy in Lynchburg 22-16 in 2018.