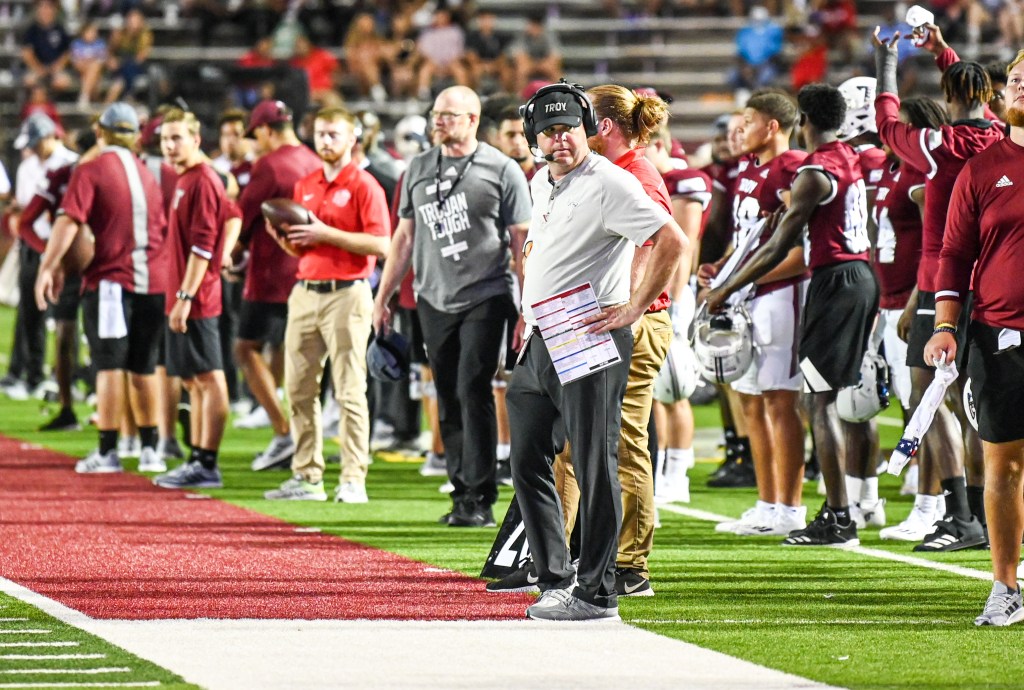 The Troy Trojans mounted a late comeback, but came up short in a 21-13 loss to Liberty on Saturday night in Troy.

The Trojans found themselves down 14 late in the fourth quarter, but got to within seven with just over a minute remaining.

“This was a four-quarter battle,” head coach Chip Lindsey said. “We thought it would be. It was like a heavyweight fight; two great teams battling back and forth. They made enough plays on offense to win the game tonight. Really proud of the team. They competed and played their butts off.”

The Liberty Flames looked to go up 17 in the game’s final minutes, but a Dell Pettus blocked field goal gave the Trojans life with 3:55 remaining. The Trojans drove inside the Flames one-yard line and on fourth and goal from the 11, quarterback Taylor Powell found Deyunkrea Lewis for an 11-yard touchdown. A blocked extra point brought the score to 21-13 with 1:14 remaining.

Liberty gobbled up the onside kick attempt to end Troy’s chances of a comeback win.

“They are heartbroken right now,” Lindsey said. “We had an opportunity to beat a good football team and get a shot in the arm in 2021.”

Troy scored touchdowns in their first and last possessions. In those drives they posted 139 yards in the two drives. The rest of the game the Trojans managed 113 yards.

“Sloppy is probably the best way to say it,” Lindsey said. “Got off to a fast start and for whatever reason couldn’t maintain it. Not sure without looking at the film why that happened. We have to learn from it and improve. You have to give their defense credit, they have a good front.”

Liberty had the ball for 39 minutes on Saturday night compared to just 21 for the Trojans.

“When the game started playing out it was obvious they were going to limit our possessions by slowing down and letting the clock go,” Lindsey said. “They have a good offense and they kept converting. We had them in a third and 12 and the quarterback took off running. We had them backed up to first and 20 and we let them off the hook there a little bit. Offensively we tried to speed up the tempo a little bit. We did that once and threw an (interception). It’s hard to get to playing fast when it’s second and nine. That was our biggest problem.”

The Trojan defense held Liberty’s offense in check in the middle quarters on Saturday. After allowing a touchdown early in the second quarter, the Trojans kept the Flames off the scoreboard until the early stages of the fourth quarter.

NFL prospect, quarterback Malik Willis completed 13-of-18 passes for 154 yards and he had two touchdowns. He rushed for 93 yards to lead the Flames ground attack. The Trojan defense finished with five sacks. Will Choloh set a career high with three sacks on the night.

“They had to get used to the speed of the game,” Lindsey said. “Once they did that I thought they played really well. When you have an elusive quarterback like Malik Willis, you are going to miss some tackles, but we sacked him several times and got after him pretty good.”

The Flames offense answered with a nine-play drive of their own. Willis and the Flames offense traveled 75 yards on their opening possession. The Flames evened the score with a 32-yard touchdown pass from Willis to Demario Douglas.

The Flames scored on their first two possessions. Their second possession was longer than the first. It went 13 plays and they traveled 90 yards ending with Willis’ second touchdown of the half on fourth and goal from the two.

After picking up 75 yards in their opening possession, the Troy offense was held to just 33 yards the rest of the half.

The Trojan defense forced two Flame punts to end the first half, sending the game to halftime with the Flames leading 14-7.

The Trojans and Flames kept each other off the scoreboard in the third quarter. That changed quickly when the game transitioned to the fourth. Willis and the Flames capped off an eight play, 90-yard drive with a four-yard run by Willis, putting Liberty up 21-7 with 12:22 remaining in the game.

Powell completed 18-of-25 passes for 211 yards with one touchdown and an interception. The Trojans rushed for a total of 21 yards, led by Kimani Vidal’s 38 yards.

Vidal led the team with five catches, while Luke Whittemore had three catches for 71 yards.

The Trojans will hit the road for the first-time next week to take on Southern Miss.