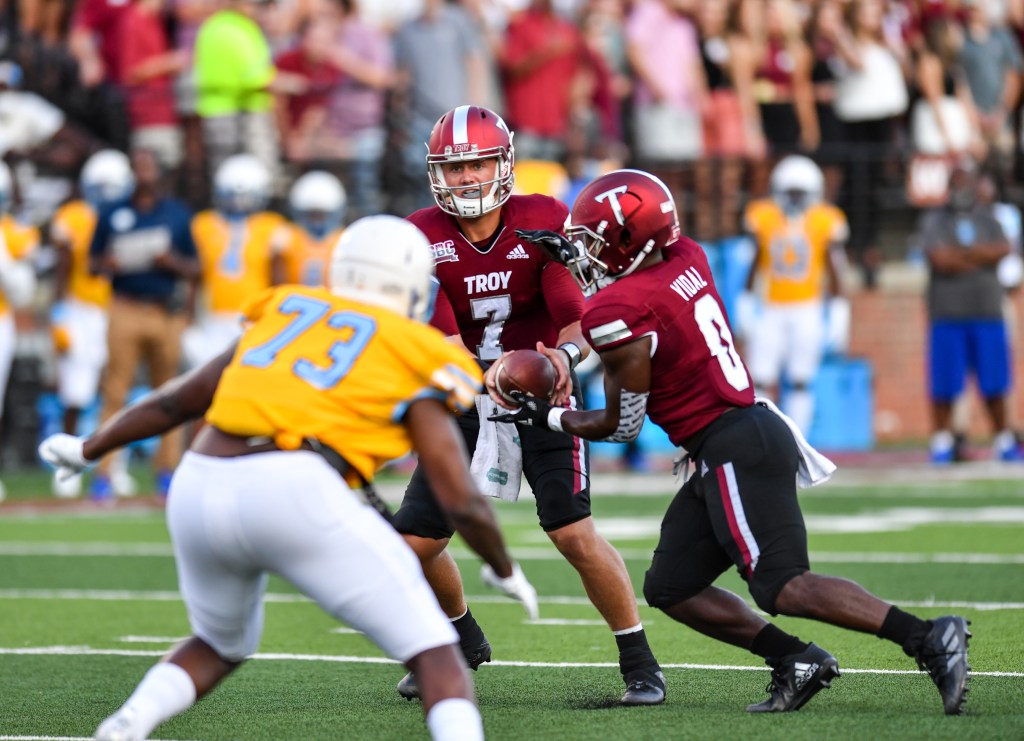 The Troy Trojans enjoyed a comfortable 55-3 win over Southern on Saturday, but now must look ahead to Saturday’s home game against Liberty.

In front of an electric crowd on Saturday, The Trojans won their third consecutive opener.

“What an unbelievable experience it was,” head coach Chip Lindsey said. “I want to thank our students, our fans, the cheerleaders and the band. Everyone involved in game day made that atmosphere unreal. I know it was something our players noticed.”

A new record: On their way to a comfortable 52-point win on Saturday, the Trojans scored 34 first half points, the most in their Division-I history. The Trojan offense finished with 454 total yards of offense, 292 of which came through the air.

“I thought we controlled the game pretty well for most of the game,” Lindsey said. “Ended up being able to run the football in the second half, which is something we really stressed and wanted to do.

“I thought Taylor and Gunnar both made excellent decisions at quarterback. I thought they were very efficient and they got us in and out of the right plays in the run game and pass game. Really pleased with how both those guys played.”

Powell finished the game completing 16-of-27 passes for 223 yards and had a total of three touchdowns. 10 different Trojans caught a pass including Tez Johnson, who had five catches for 92 yards.

“I thought we ran to the ball and played extremely hard,” Lindsey said. “For it being game one, I was really pleased that we tackled well. We contested a bunch of throws and we got four interceptions, which was a huge part of the game for us. It gave us some short fields. I thought we harassed the quarterbacks and tackled well in space. Excited to see that.”

Looking ahead: The Trojans will play their second-straight home game this Saturday when they take on the Liberty Flames at 6 p.m. It will be the fourth meeting between the two schools. Liberty holds the series lead 2-1. They defeated the Trojans in their last meeting, 22-16 in 2018.

“This is a really talented football team coming in this weekend,” Lindsey said. “They were 10-1 last year. They have all their returners back as well.

“Overall, it’s a good football team. We are excited to get this opportunity. It’s a big challenge, but I know it’s one we are looking forward to.”

“He is a guy who can beat you with his arm and his feet,” Troy defensive coordinator Brian Hall said. “The thing you try to do is have a spy on him as much as you can, but at the same time you have to be good in coverage. It’s very difficult. He is a very dynamic player, a good athlete. He definitely makes it tough, because if things breakdown he is capable of getting a first down with is feet.”

“I don’t think you really can,” Hall said. “That’s why he is who is he is. You do your best with your look squads and obviously have those guys scramble around as much as possible. I think at the end of the day you just have to keep talking to your players about where they are at as far as in their relationship with the quarterback and doing a good job knowing that if it’s not there he is going to look to make a play with his feet.”