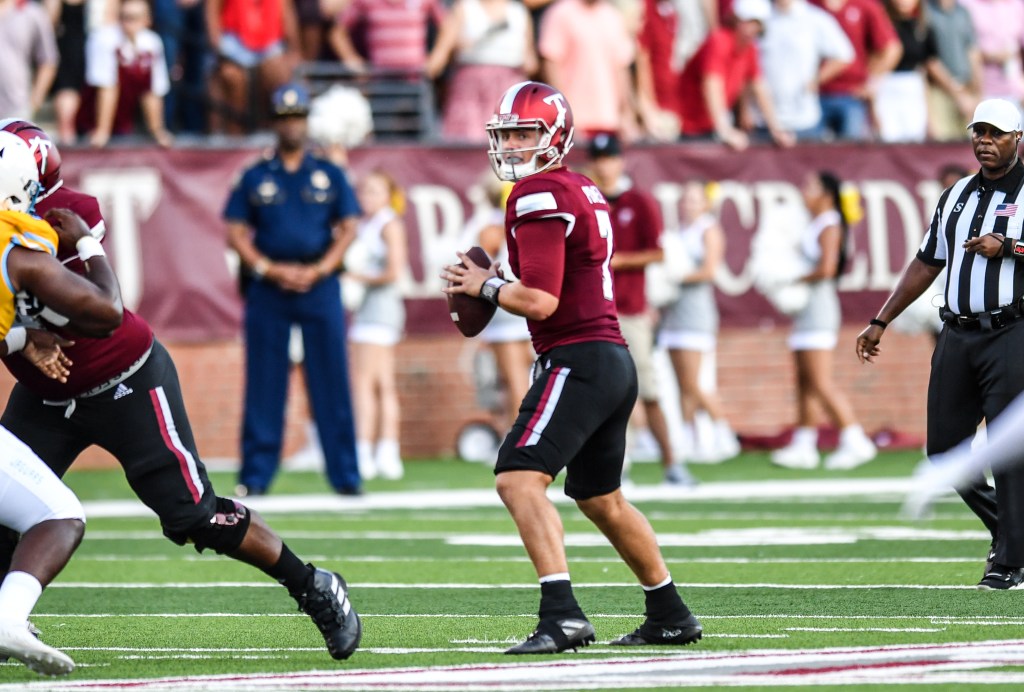 It didn’t take long for first-year quarterback Taylor Powell to connect to his new group of receivers, one in particular.

In Troy’s 55-3 win over Southern on Saturday, Powell connected with freshman Tez Johnson for five receptions for 92 yards. Johnson hauled in a key fourth down pass from Powell during the opening drive that eventually led to the game’s first touchdown. He scored the game’s second touchdown when he hauled in a Powell pass and ran it in for a 26-yard touchdown in the latter stages of the opening quarter.

“It was nice to see him on that play (fourth down),” Powell said. “It was a big conversion that carried us into the end zone. That connection goes all the way back to January when I got here. I made it important to really emphasize timing with these receivers, knowing where they are going to be against certain coverages. It was good to see Tez read it like I saw it.”

Johnson credits Powell for being locked in and putting the receives in the right areas on the field to make a play.

“Taylor is a really good quarterback,” Johnson said. “We worked together during the offseason. He is really dialed in. He is the first guy in and the last one to leave. He is going to make sure you are in the right spot every time. Taylor is going to be locked in all the time and is not going to miss a beat.”

In all, Powell connected with 10 different receivers. Luke Whittemore hauled in three catches for 52 yards and newcomer Deshon Stoudemire had two catches for 35 yards and one touchdown on a beautiful back shoulder throw by Powell. Demontrez Brown, Reggie Todd, Deyunkrea Lewis and Jamontrez Woods all had two catches.

“When you talk about Deshon Stoudemire he continues to make plays since he got here,” head coach Chip Lindsey said. “I was really pleased with those guys. Demontrez made a nice catch. Demontrez, in my first year, was injured with a knee injury and now, it’s been two years, but looks like his old self. I thought our tight ends played well tonight and were active.”

Powell and the Trojan offense will be challenged this Saturday when the Liberty Flames pay a visit to Veterans Memorial Stadium. Kickoff is set for 6 p.m.