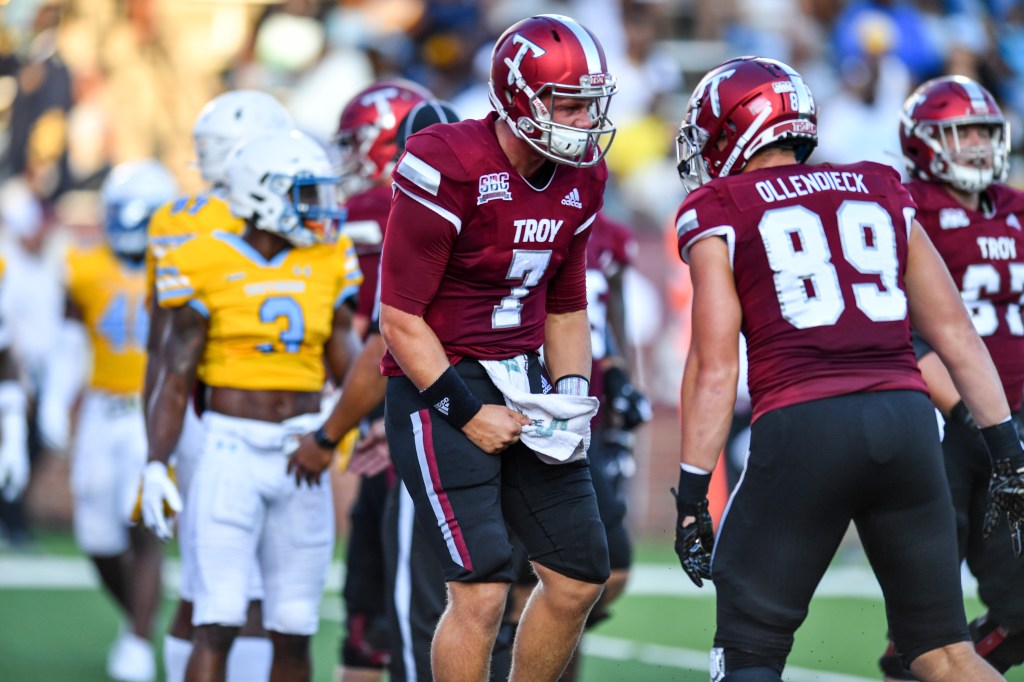 The Troy Trojans broke their Division-1 record when they scored 34 first half points in their 55-3 win over Southern on Saturday night.

The win for the Trojans gave them their third-straight season opening win. Troy scored over 40 points in their opener for the third consecutive season.

“It’s obviously great to get off to a great start,” head coach Chip Lindsey said. “Really pleased with how our team approached the game, prepared for the game and really took control of the game in all three phases.”

The Trojan offense totaled 454 yards while holding the Jaguars to 189, 101 of which came through the air.

“I think we smothered them,” Lindsey said. “I think we held them to under 100 yards in rushing and under 200 yards in total offense which is always good. Offensively I thought we started fast and we were in a good rhythm. Tried to really make a point to run the ball in the second and third quarters.”

“I was really impressed with the defense. We have a lot of bodies and a lot of depth.

Powell finished the game completing 16-of-27 passes for 223 yards and he had two passing touchdowns and one rushing score.

“I thought he handled himself really well,” Lindsey said. “He seemed be in total control and made good decisions. It was his first time playing here and on the sideline, we had a conversation and he had a smile on his face. He said this was awesome.”

Powell started his first two drives with the Trojans completing 8-of-10 passes for 105 yards. His first Troy touchdown came on a one-yard run after bulldozing his way into the end zone.

Powell finished the first half completing 16-of-23 passes for 223 yards to go along with his two three total touchdowns.

“I didn’t play last year. I was in the transfer portal,” Powell said. “I was working hard the last 600 days just to get here. It was really nice to see it come to fruition. I was excited to see us get off to a hot start.”

Johnson broke a career high in receiving yards in the first half alone. He had five receptions for 92 yards to go along with his one touchdown.

“Tez is a playmaker,” Lindsey said. “The one I was most proud of was on third down. He made the right read on an option route and got us a first down. He is very capable of changing the game very quickly. He can make plays and I thought we did a good job at getting him touches.”

The Trojan defense got involved in the second quarter. Already leading 14-0, cornerback Zion Williams hauled in an interception ran it back for a 19-yard touchdown, putting Troy up 21-0 with 13:49 remaining in the first half.

Williams finished the first half with two interceptions.

Deshon Stoudemire scored his first career touchdown as a Trojan on a 17-yard pass by Powell and Troy extended their lead to 25 at 28-3.

The Trojans closed out their scoring with a touchdown by their fifth different player in the opening half when Jamontez Woods scored on a one-yard touchdown run and the Trojans went into halftime leading 34-3.

Kimani Vidal scored his first touchdown of the 2021 season when he raced his way for a 37-yard score on Troy’s first possession of the second half. It was Vidal’s longest rushing touchdown of his career.

Gunnar Watson entered the game at quarterback early in the fourth quarter.

In his opening drive of the game, Watson led the Trojans on a 15-play drive that lasted 10:25, ending with Woods’ second touchdown of the game and the Trojans led 55-3 with 3:02 remaining in the game.

The Trojans will remain at home next weekend when they host nationally ranked Liberty at Veterans Memorial Stadium.