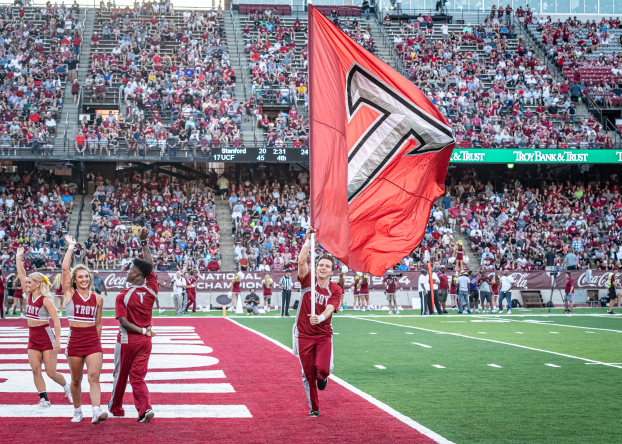 Football is back at Veterans Memorial Stadium on Saturday evening. The Troy Trojans ring in the 2021 season with a showdown against Southern out of the Southwestern Athletic Conference.

The Trojans start year three under head coach Chip Lindsey. All offseason long the Trojans have been gearing up for what they hope will be an exciting 2021 season.

“We have had a great preseason,” Lindsey said. “It’s been a build up for us, getting ready for 2021. It’s something our players have been really excited about and it starts this week.”

The season will start against a Jaguar team that went 5-1 in an abbreviated season this spring.

“Really good football team,” Lindsey said. “They have a lot of good tradition there and I know they are going to come here excited to play. The guys play extremely hard and are well coached. They were 5-1 and finished in the top 25 in the FCS.”

The Jaguars enter the 2021 season with 10 players on the preseason all conference team.

“That tells you what kind of team they have,” Lindsey said. “We are going to have to be ready to go and play good, Troy football.

The Jaguar offense averaged 37.6 points per game in the spring led by quarterback Ladarius Skelton. The redshirt senior completed 37-of-65 passes last year for 529 yards. He had three touchdown passes and three interceptions. As a runner, Skelton rushed for 317 yards on 52 carries and he had four running touchdowns.

“He is a veteran guy,” Lindsey said. “He was their leading rusher the last two years. He is a true dual threat guy who I think can cause a lot of problems with his feet as well as throwing it. They do a good job designing runs for him. He can improvise in the passing game when things aren’t there. We have to limit his explosive plays.”

Defensively, Jordan Lewis leads the way for the Jaguars. Lewis had 10.5 sacks in just five games played last season. He finished with four sacks against Alabama State. He finished with 27 total tackles and 15 tackles for loss.

“He is extremely active and the active FCS sacks leader,” Lindsey said. “He is a first team All-American. He is definitely a factor. He causes a lot of problems. He gets after the quarterback, but also gets after the run pretty well. We are going to have to have a plan for him.”

This is the first time the two teams have met in their history. Kickoff is set for 6 p.m. the game can be seen on ESPN3.