‘Master of Preparation’: Powell putting in the work 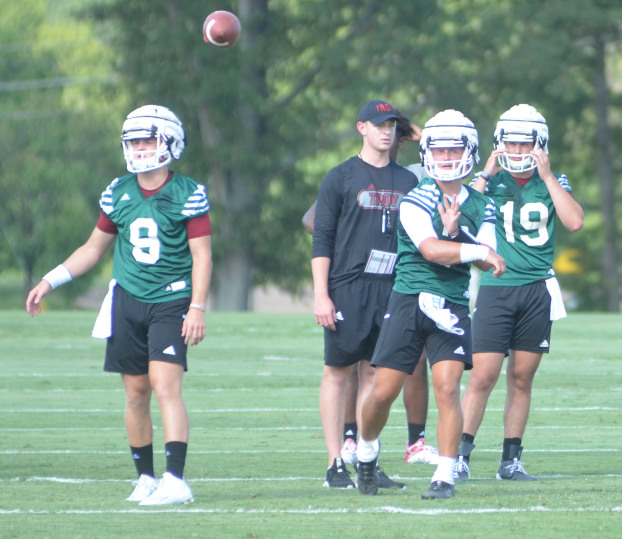 Mike Hensley | The Messenger Taylor Powell throws a pass during a camp practice earlier this summer. Powell and the Trojans will open up against Southern on Saturday.

Long before he was named Troy’s starting quarterback, newcomer Taylor Powell was putting in work that included film study, workouts and on field activities.

All that hard work didn’t go unnoticed by his new teammates…teammates who believe he is the most prepared player on the team.

Powell’s work ethic when it comes to playing football started at a very young age. Way back in junior high school, Powell was already watching film and preparing for upcoming opponents.

“A bunch of the guys make fun of me for how much film I watch and how much coffee I drink,” Powell said. “At quarterback, you kind of got to know what’s going on.  You have to be the first one in and the last one out. I go back to Woodland Junior High and I was doing the same exact thing. It’s who I am. I don’t really try to change who I am. I’m going to stick to my routine.”

Powell’s weekly routine begins Sunday when he watches film from the game the previous day. He also turns his attention to the weekend’s next opponent. He spends his week watching different game day situations including third downs, red zone and two-minute drills.

“I kind of have my routine of how I go about it,” Powell said. “I feel like it’s allowed me to be where I am today.”

One player that has noticed Powell’s routine is starting center Dylan Bradshaw, who works with the newcomer on a daily basis.

“He is one of the most prepared persons I have met in my whole life,” center Dylan Bradshaw said. “The guy watches four to five hours of film a day outside of our meeting time. He is the master of preparation, that’s what I call him.”

Because of his preparation, Bradshaw is already calling Powell a leader on the team. Since day one, Powell immediately began to cultivate a relationship with his offensive line.

“He is putting his heart and soul into it,” Bradshaw said. “From day one of when he got here he started building relationships with all five of us starting guys (offensive line) and even the backups. His relationship with the offensive line has been a priority since day one.”

“He is exactly what I expected,” Troy linebacker Carlton Martial said. “He is the most prepared guy in the building. I love that about him. I really am looking forward to what he (does) this Saturday.”